Hi members, I am new to linux OS and for some reason i have to use some windows applications. Can somebody guide me installing windows on external drive or alongside zorin? I have created windows bootable usb using ventoy. Thank You

Hello @amrittiwarie,
If you want to use windows applications that won't run on Zorin OS, then you can use a Virtual Machine and install Windows on it preferably Windows 7.

However, if you still want to dual boot then you would need not only a Windows bootable USB but a Zorin bootable USB also.
First, create some free space to install Windows using the disks utility or gparted.

After you created the free space, you can turn off your PC and insert the Windows bootable USB. Remember that, to boot from the USB you will need to put 'removable media' at the top of boot order in the BIOS settings.

Once you successfully boot into the Windows Installer, you can follow the on-screen steps. Remember to create a NTFS partition using the free space that you created earlier and select this partition while you install Windows.

Windows should install normally and it will ask you to setup Windows after the installation. After, setting up Windows, you will be able to access Windows but remember that GRUB won't appear anymore when you turn on your computer again and it will boot directly into Windows even though you have Zorin OS installed. This is because the Windows bootloader has overwritten the GRUB bootloader. Boot using the Zorin OS bootable USB to fix the GRUB. Then, click 'Try Zorin' when the Zorin OS installer opens. Now install boot-repair utility to fix GRUB.
Open the terminal and enter:

Now launch boot-repair
Click on recommended repair and it will start repairing the bootloader. It might ask you to enter some commands in the terminal and paste the output back. And later it may ask you whether you want to upload the boot-info to paste bin. You should select 'Yes' if the boot-repair utility displayed errors while repairing the GRUB.

If everything went correctly then when you restart your PC, you should be able to see the the GRUB bootloader which you can use to boot into either Zorin OS or Windows.

@Elegant_Emperor Thank You for such a detailed guide. How ever i am unable to create free space using gparted tool, while i try to unmount it says "Target Busy". Shall i try by booting zorin on usb?

Note: I have tried using windows on Virtual box, It always tends to lag and freeze the whole system for me.

Yes you will need to shrink the partition after booting into a live USB. Make sure the free space is at last 50 GB and also make sure not shrink too much or else it might result into data loss.

You would be better running Virtual Machine Manager - runs a lot more smoother than Virtual Box and the Graphics look better too - but don't expect to play games! For basic applications it should be fine.
During lockdown I only had Windows 7 Pro 32-bit present in Virt Manager because of a shared mailbox that could only be accessed with Outlook365. Then IT made the decision not to allow Windows 7 machines (even VM ones) to access remote server. I was able to upgrade the Windows 7 Pro VM to Windows 8.1 Pro so I could access the shared Server. 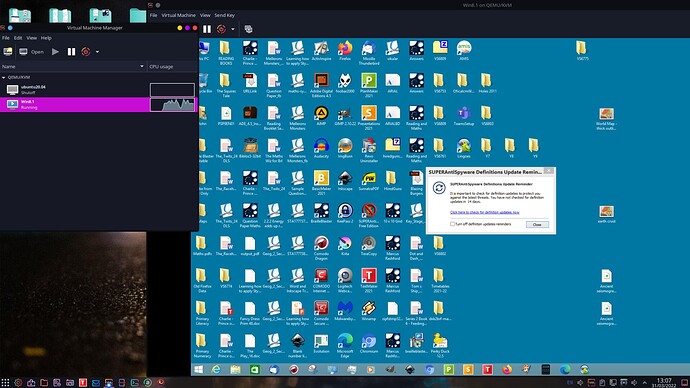 Thank You @Elegant_Emperor Finally, I am able to create partition for windows installation for which took really long time. Shall try on Virtual box first before dual booting. Thank You

Hi @swarfendor437 Thank You for sharing your experiance, I will definitely give a try.

I installed virtual manager and giving me a connection error like this...

"Unable to connect to libvirt qemu:///system.
Verify that the 'libvirtd' daemon is running."

Is there a solution or i shall proceed ahead?

PS: I have googled before posting here but couldn't find the solution.

Update- Finally installed windows on virt-manager .
Thank you for the help

Virt Manager normally wants to put your images in a system folder - I prefer to create a folder called 'storage' in my /home folder. Remember to make a backup of your .img files on an external drive in case anything goes wrong. I've had a few hiccups a few weeks back and I had to delete the .qcow but not the .img - Meant having to 'create new image' and then just pointing to the Windows .img.
If you want to access any USB sticks or other peripheral storage devices you have to add hardware on the Details page. Remember if you add something like a webcam or USB stick they should be present when you boot the .img or it won't boot as it will be looking for the devices you created in Details.