How to know if Zorin is currently installed?

So today I tried installing Zorin OS for the first time in my life. Also, it's the first time I try to dual boot. The first installation took a lot of time, easy more than 20 mins. After installing it, I restarted my laptop and when it boot up, I was prompted with a black screen, terminal-like and a message that said:
"gnu grub version 2.04 minimal bash-like line editing is supported"
To try and fix it I booted into Zorin live from the USB and executed Boot Repair, but it failed. Had I disabled Safe Boot? Maybe I forgot to. So I rebooted and disabled Safe Boot (which indeed was activated). A message appeared telling me that there was a pending executing order (I don't recall the exact terminology, but the point is that something pending was going to be executed) and I accepted its execution.

Now, when I turn on my machine and hold f9 to boot into Zorin, I don't see anything except the Windows Boot manager. Was Zorin uninstalled and I didn't notice? 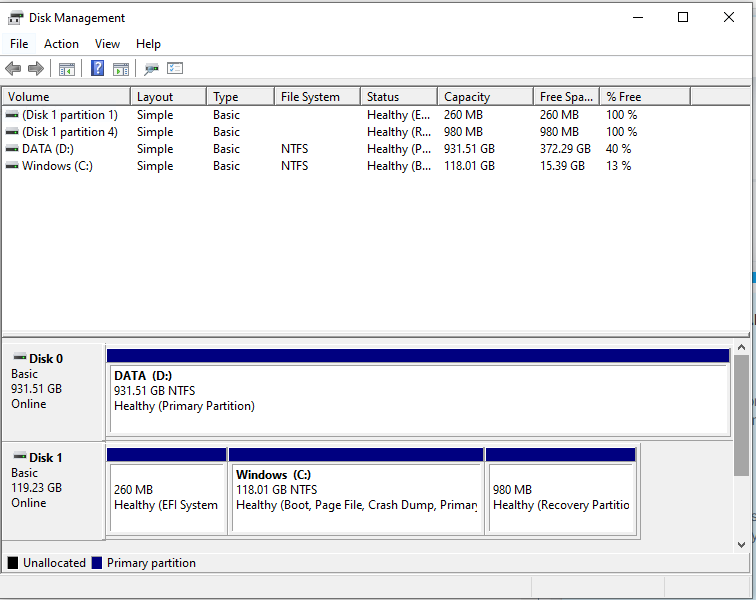 image756×600 21.2 KB
This shows up when I execute diskmgmt.msc on Windows. I can see two partitions that may be Linux, the ones with no File System tag. The problem is, I would like to use the storage space taken by the Linux Partitions created on the first installation to try to reinstall Zorin into it.... but I can't delete the partitions. The system tells me they are in use (?) If they are Linux partitions, why would they be in use if I'm booted on Windows?

Also, when I try to reinstall, the "install alongside windows" option doesn't appear anymore....

How can I perform the best and the most clean reinstall of Zorin OS 16?

Make sure fastboot and secure boot in the bios are disabled. Set the hdd/ssd where zorin is installed at top in the bootorder incl the linux bootloader. Set the windows bootloader as last.

If you get a message no bootable device found, use this tutorial -> Fix No Bootable Device Found Error After Installing Ubuntu - It's FOSS

Hope this helps for you. If not format the entire disk with gparted in the live session and try again.