How to see graphics board size?

I didn't expect that I'd have been asked to set my graphics board size, how do I see it

? If it means my laptop VGA it's ATI Mobility Radeon HD 4200, if other instead I don't know

. 512 MB, right? On a search that I did later 512 is the maximum but I must be sure to select the right amount, I don't want even more problems with games 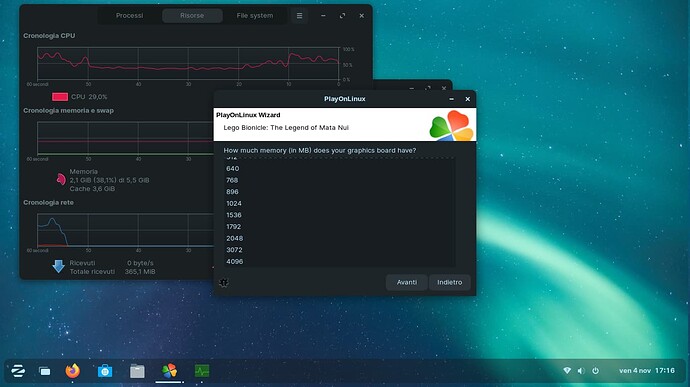 Should do it.
For example, on mine:

It means that your Radeon uses the System RAM.

Why use playonlinux ??? If you use lutris or steam with proper runners the games are running smooth as butter…i never got playonlinux to work and run proper with games.

Jedi fallen order is not listed for sample, i play that game in lutris.

Me when I saw Lutris size

, but probably I'll also try Steam, some games that I like come from it, thanks.

I get most of my games to play on Zorin from Steam however I play these games off-line ..... I downloaded a new free game called Tank Force but discovered it is on-line only and after I ran out of shells I found out why ...... you have to buy additional ammo with real money ..... to heck with that ..... but the game is free so I guess it is to be expected .....

Also just downloaded a fishing game ...... Fishing Planet ..... if you like fishing ..... it is the most realistic game for fishing I have ever played ..... totally different than the other style games I play ..... run and gun ..... very relaxing and unlike Tank Force you earn fishing dollars to spend on equipment and such ....

I also enjoy Stardew Valley but it is a timing style game and the time of each day goes by pretty fast ..... if not for that SV would be a very relaxing game also ..... but the fishing part in that game sucks ......

I have more than 300 games running with Steam, either natively or with Steam proton engine.

What @Frog is saying, he only play fast paced First Person Shooter games to frag and demoralizing the youth so they never play games again

..... actually it is the other way around the youth are demoralizing me ..... and that is the exact reason I don't like to play on-line .... me ol' reflexes ain't what they used to be and my tank .... before I ran out of ammo ..... kept getting ambushed by stronger and better equipped tanks ..... I was doing good till I ran out of the special ammo and had to revert back to the run of the mill shells .... now I have about 10 shells left and they wouldn't stop a jeep let alone a heavily armored tank ..... and as I refuse to buy with real money .... more shells I guess my dreams of being a tank commander are over ....

My grandfather taught me at an early age how to fish and I have never lost my love for fishing .... whether it be bass fishing tournaments or just laying back on the bank of a pond or river waiting for ol' Mr Whiskers ..... catfish ..... to stretch my line ..... to me fishing is the most relaxing way to spend time .... plus some taste pretty good too .....

, I just run a random game from clash3d.com, I just go in and shoot

. I prefer to play offline, on those multiplayers there are many cheating or too much powerful and you always lose. Those few times multiplaying I prefer playing in teams or coop, now I have to make IGI 2 Covert Strike and Unreal series work so I can start again to multiplay with someone as on my other laptops framerate is low. A bit off-topic: why my laptop detects 5,5 GB when I have 2 RAMs, one with 4 GB and other with 2 GB? I'm not cool on math

but I see about 500 MB missing, where did I lost them