Hello,
I switched from Windows to Zorin OS yesterday and the main concern was hardware, specifically my HP LaserJet Pro M15w printer. I made this leap at the suggestion of @Aravisian. If anyone is interested here is how I got HPLIP to install. This took about 4 hours and a lot of frustration.

I started with a clean install of Zorin OS and did these steps and got the printer working before doing anything else.

In terminal I ran these commands in this order

I didn't need any network or scanning capabilities since this is a USB printer attached to my computer, so I chose to install discrete drivers.

Lastly I ran hp-setup from terminal and got a GUI which walked me through setting up my printer.

I hope this helps people coming over from Windows.

This took about 4 hours and a lot of frustration.

When I was using HP Laserjet P1005 with USB connection, I could install Linux driver using wget and run a batch command.
See, for example,
https://idroot.us/install-hplip-ubuntu-20-04/

I did not try this in my Zorin 16 since this USB only printer has been converted to a network printer using Raspberry Pi (operating with CUPS). But the above method should still work in Zorin 16 which is based on Ubuntu 20.04.

Unfortunately this didn't work for me as this is what I get: 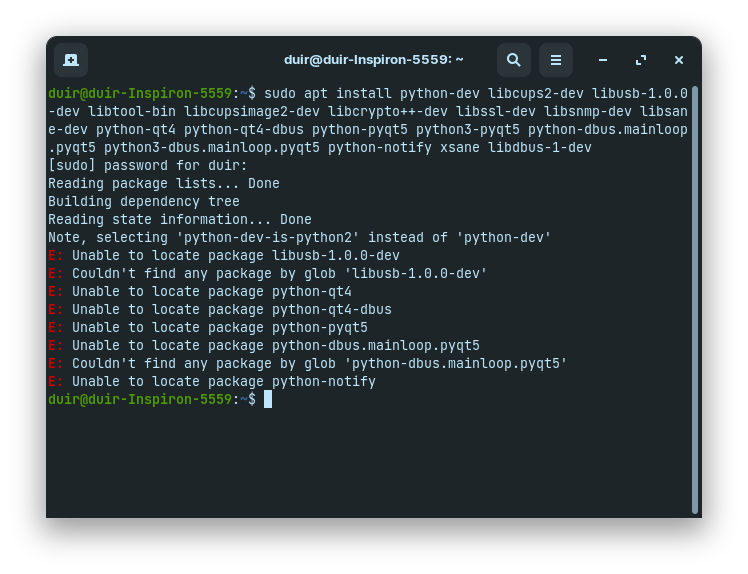 Trying to install the hplip 3.21.6 on Zorin16Pro for my HP Envy 5540 and need both printing and scanning, attached via USB. It won't allow it to be installed automatically as it says it is from an unknown distro. The manual installation instructions aren't a lot of help as the closest match I can see are for Ubuntu, either 8.04 or 10.04 so I have no idea if either of these are applicable....

When I was using HP Laserjet P1005 with USB connection, I could install Linux driver using wget and run a batch command.
See, for example,
https://idroot.us/install-hplip-ubuntu-20-04/

This method results in this error: 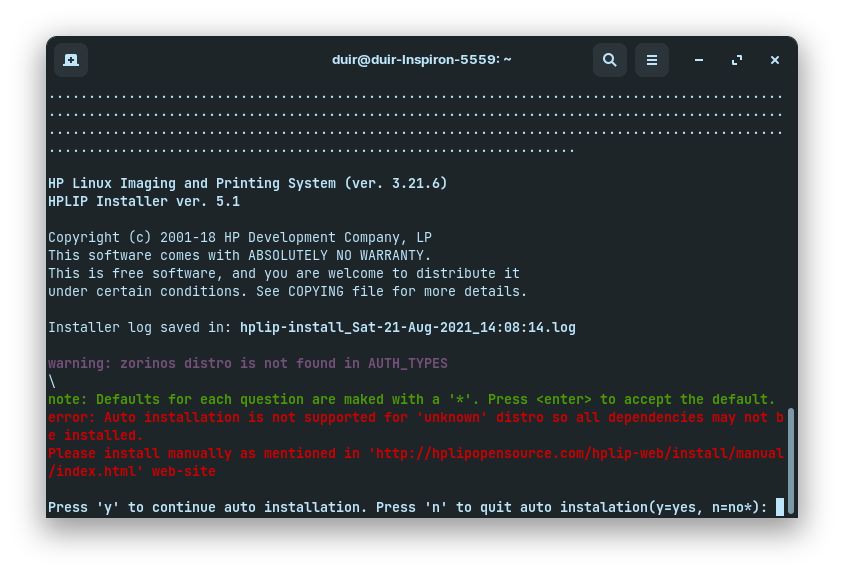 And what will happen if you press "Y" after this error message?

I don't press "Y" because it says this:

Auto installation is not supported for 'unknown' distro so all dependencies may not be installed.
Please install manually as mentioned in 'http://hplipopensource.com/hplip-web/install/manual/index.html' web-site

Given that this is my second day on Zorin, and in fact Linux, I won't be pressing anything that suggests "all dependencies may not be installed" because I have no idea what that means, nor the consequences. It says "Please install manually...." but the problem with that is HP's manual installation instructions are for Ubuntu 8.04 and 10.04. I believe Zorin 16 is based on 20.04?

You'll note that I said this:

I missed that one. Thanks for pointing it out.

I tried what you suggested and got this: 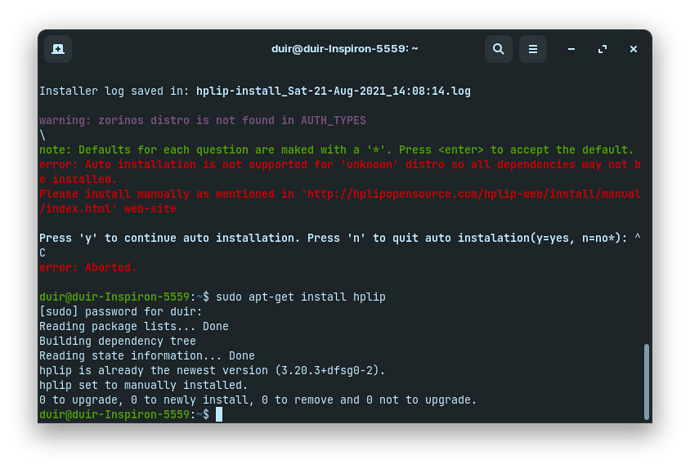 For me, it looks like you already have HPLIP installed.

Did you login/out or reboot to enable it?

No, do I need to? I can see the HP Envy 5540 printer, I added it it yesterday, but when I go to the settings there is nothing in there about scanning, it's just set up as a printer.

Not always but some drivers require reboot and HPLIP is one of the latter.

I've rebooted today already, the printer was added yesterday. There just seems to be no options about scanning.

no options about scanning

To use scanner, you need to start Simple scan (can be installed in Software) and set up scanner in it.

Simple scan isn't there.....but....Document Scanner is there. I just launched it and it detected my HP Envy. So that will probably do it I suspect.

Thanks for your help with this FrenchPress, I am a total newbie to Zorin/Linux so don't even know where to look for most things! I'm glad there are helpful folk around like you. So thanks, I appreciate it.

Document Scanner is there. I just launched it and it detected my HP Envy. So that will probably do it I suspect.

Glad to here that all seems working now

If you think the problem is solved, you can tick

to mark the thread as solved.

This will help the future visitors to this forum to find a solution they are looking for.

PS
Document scanner is yet another name for Simple scanner.

OK...just point me towards where the tick is....

There are three dots in your original posting.
By clicking it will show you a option of marking the thread as solved.

I don't see that when I click the three dots, but then I didn't start the thread.

but then I didn't start the thread.

You are absolutely right about that.
Well at least you can tick

in the solution I gave you