I can t update my driver

When i try to select my driver it shows up an error and i tried to update my driver but there are firmware missing files and when i see the name of the gpu in the about it says NVD7 and i tried to fix the problem but i ended up that i can t boot and the recommended repair in the zorin live didn't fix it so idk what to do i don t care if i will reset my pc because i didn't do alot of things i didn't even download steam because i was trying to fix the problem and when i open a game on lutris it says that it needs directx11 and something with application 3d i dont remember the exact name and something about the drivers i didn't know that it will be SO HARD TO PLAY on linux so i will wait for help i guess and the gpu is nvidia 820m.

I'll recommend you split up your problems in different threads. As it's now I don't know where to start on your problems. And please set some "full stops" as it's very hard to read.
Thanks.

There aren't alot of problems there is 2 i think first it that i can t update my driver(use my gpu) and directx11 problem is because of the gpu i think. Second is haswell vulkan is incomplete i don t know how to fix it. Third is and it maybe be with the gpu is that firmware missing files. But i got a solution for the gpu(I THINK) is that i install zorin os nvidia driver safe. But i will wait for a respond from anyone to tell me if it is safe to install zorin os nvidia driver safe. my gpu is(820m)

Make sure that you haven't sofware center or any updater and so on open. Close them and run the commands again.

i downloaded and thats it

Make sure to type -G. Linux is case sensitive.

As you can see from the inxi -G command you are using nouveau driver which is the open sourve driver. The one you want to use is the restricted close source driver.

The first command will update your system, the other one will install the latest driver that works for your card.

Okay. This could be that your card isn't supported in 5.15 kernel and up as nvidia-340 is quite old (in computer standards).
Try start the app that's called something "additional driver" and give me a screenshot of available drivers.

i don t have this app

I Just booted Zorin OS up in VM 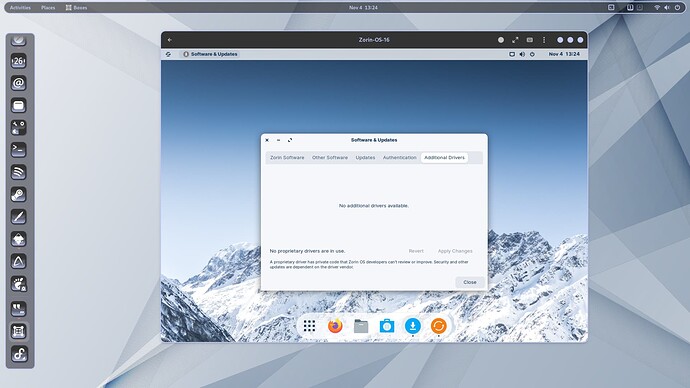 Yes? Can you post these two things or take a screenshot?

how to take a screenshot from my pc?

Hit the "Print Screen" button on your keyboard. The screenshot will be saved in your "Pictures" folder.