Stumbled upon this website that uses Zorin logos. Is this official merchandise? Doesn't look like to me. Under Zorin's Trademark, Copyright, and Licensing Policy, it clearly states that "Zorin Technology Group Ltd. permits the use of Zorin OS branding and the above brand assets for non-commercial use only." Link to the website: https://www.redbubble.com/shop/zorin
Screen shot: 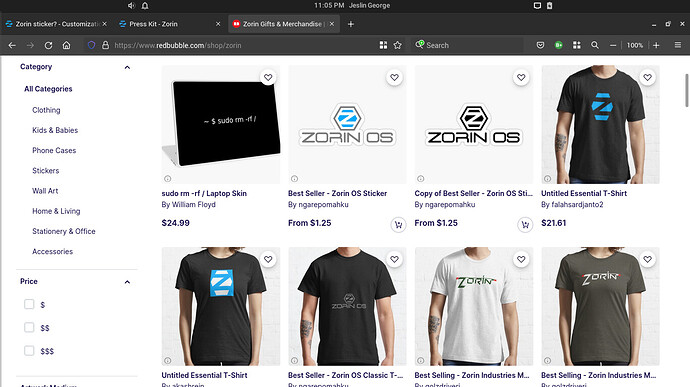 @zorink @AZorin
I think only you can answer this question.

I am not a developer for Zorin, but knowing what little I know of Copyright law, this is illegal. Unless they have expressed permission from the Zorin team, its illegal.

And I am pretty sure, if the Zorin team had given them the OK, then the Zorin team would have boasted on the forum about how we could get ahold of Zorin merch that someone was doing for them on another site.

Time for the Zorin brother's to give em the smackdown, Devin style from Legal Eagle. HEHE

Hoping it's legit. I like the tee with the new logo. Wouldn't mind wearing that around town. But only if it's legit.

Might look to the silver lining: Free advertising for Zorin OS.

I say, the less people messing around with MX Linux, and get onboard with Zorin OS the better. Yes, I've seen the Distro Watch and Zorin is like number 13 on their list, I don't think thats fair at all.

All the other Linux distro's that are not Zorin and POP can go screw off. LMAO! Seriously though, who's running the show at DistroWatch, is it Canonical, cause I'd believe that if it were, we both know their opinions can't be trusted lol

Canonical does not run or control Distrowatch. The stats from Distrowatch are a general guide, but must be taken with a grain of salt.

"The DistroWatch Page Hit Ranking statistics are a light-hearted way of measuring the popularity of Linux distributions and other free operating systems among the visitors of this website. They correlate neither to usage nor to quality and should not be used to measure the market share of distributions. They simply show the number of times a distribution page on DistroWatch.com was accessed each day, nothing more."

I think what makes this interesting is that users are more likely to look up a distro that they are not using on distrowatch, in order to learn more about it.

I have looked up a lot of distros on Distrowatch but very rarely ever looked up Zorin on it.

I don't even bother looking up any of them. The only part of distrowatch that I've seen is the popularity list, and where each distro falls under that popularity. Which as you've said, are generated from page hits.

I searched for a Linux OS that was easy to use and looked like Windows. Thats when I came across Zorin. And even after switching to POP OS on my main machine where I game, I still can't give up on Zorin.

So I am glad I had another computer around to give excuse to install it on hehe. Plus, I had fun supporting the dev's too.

Exactly. Distrowatch rankings are based on page hits:

So what I'm taking out of this, is when I'm bored with nothing to do I should go to distrowatch and just click on Zorin over and over again.... Sounds like a good way to spend an hour....

BTW, my ex-gf has this machine that makes stickers, decals, a bunch of stuff.
I'm going to ask her if she can make me a T-shirt with the Zorin logo. I just have to find a high quality blank t-shirt first. She'll do the rest. Than I can sport the coolest shirt in town.. Can't believe I didn't think of it sooner. Yet again, I am a little slow at times....

BTW, my ex-gf has this machine that makes stickers

Hi does anyone knows where i can get a small zorin logo sticker to put on the laptop lid.

Or, take it as it is. An honest count is as good.

Thanks for letting us know! There were unauthorized commercial uses of our trademarks, which is not permitted. We've contacted Redbubble about this, and they have removed these products from their site.

Here here, good job Azorin! Glad to hear that has been dealt with. These pirates will stop at nothing, if its not the pro software they try to steal, and put virus's in, then its the copyrighted logo they steal to try and make money that way. Its a vicious cycle that needs to stop.