I was hoping I could get some assistance with the keyboard shortcuts in Nautilus on Zorin. To keep this short, I will provide an example below.

Current Nautilus 'Rename' shortcut is 'F2'. I would like to change this to something that is not 'F2' for... personal reasons.

How do I do this? Searches on Google and Zorin Forum fruitless

Thank you very much for your time.

Do you have a ~/.config/nautilus/accels file on Zorin Core?

Negative, the only file in the /nautilus folder there is search-metadata text file.

To be honest, I just went ahead and dropped Nautilus use and went to Nemo. Already heaps more user-friendly than that which I've grown accustomed to so far.

Only problem now is, I think the install of Nemo broke my [Rclone - Put.IO](put.io) mount to /home. Not quite sure what happened.

While working this problem and resolving to create a separate post regarding the issue above with Rclone; as well as for requesting a Zorin-specific fix/update for Put.IO support/integration as your team so beautifully did with the Online Accounts part of Zorin OS settings.

I hope this isn't too big of an ask, and I know I can mount the online drive with the Rclone --daemon flag, but I would much prefer to be able to have the "one-stop-shop". Would integration of Put.IO and including it in the list of available Online Accounts/Cloud Drives be something we can look forward to

Do you mean the link to your Cloud Drive showing up in the Left Pane of the file manager?

I believe we're talking about the same thing... 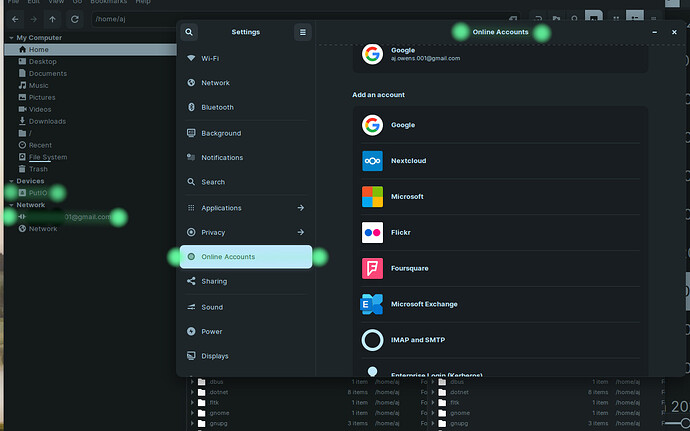 I see the directory sym'ed for Put.io in Nemo- is it not opening it?

It is, but only because I rclone'd to it. I wanted to know if it was possible to have it done as intuitively as if we were to go to Settings, Online Accounts, Add an account.

I agree with you... this may be a Gnome Thing - exclusion.
I am not sure how to get it to add additional accounts that it doesn't list. I will see if I can find anything, but make no guarantees...

I wanted to know if it was possible to have it done as intuitively as if we were to go to Settings, Online Accounts, Add an account.

Never heard of put.io before. It is not possible to add other third-party accounts that are not listed in the settings app except for email accounts. Rclone is the best way for now.

Thank you for your answer. I hope we can look forward to someone putting something official out there in the future for this kind of request.

I think it would be great to be able to expand on the cloud providers already coded intUbuntu's base package - or is it Gnome? Not sure if they're synonymous in this instance.

Clearly I have no idea how all that would work or how difficult it would be, so I'll just put a pin in my imagination until someone revives the topic for any reason.