I occasionally have to go out of town to my daughter's. And I always take my laptop. Sometimes I only turn it on for an hour or so to check my emails and look at this forum and a couple of others. By the end of an hour or so my battery is usually nearly gone.

But on my last visit there last week I noticed that even after a couple of hours of doing some searching online my battery was still showing almost 1/2 charge. I got to wondering why the big difference? I just realized this last visit was the first one I had made since switching to Cinnamon for my DE. Is Cinnamon really that much easier on resources than the Gnome DE that came with Zorin. The version of Zorin on my laptop is 16 core. I really can't think of any other reason for the much better battery life on my last visit. I didn't notice this at home because I normally just leave the laptop plugged in at home.

Has anyone else seen the same?

Yes. This is a big part of why the desktops are also referred to as Heavy or Lite (light).
I consider Cinnamon to be mid-range; it is heavier than XFCE but lighter than Gnome.

"Heavy" refers to Heavy Resource Usage - running a lot of resources in order to run the desktop.
The fewer resources you use, the less energy is used.
Gnome has done an excellent job of preventing Performance Loss due to desktop weight. It can be easy to forgot, because of this, how heavy it is.

I find this is interesting. This topic should be in the feedback section.

I have a mid range nuc with i3 processor, which at the moment runs on Zorin16Lite as main boot an Kodi as second. I would like the ad ZorinCore and run the triple boot. This so because with this pc I started discovering Zorin15.3. core and it ran super. So that;s why I want to try the triple boot and would like to ad the cinnamon DE to it.

Cinnamon for my DE.

cifta, can you tell what commands I need use to install this DE and if there are additional software that needs to be installed?

All you need to do is open Synaptic Package Manager and enter Cinnamon - if you click on the triangle to the left of the installer window you will see that it installs all of the dependency packages for it to run - once installed, reboot your machine and before you login with your password, go to the gear icon bottom right and select cinnamon before entering your password. Now login to Cinnamon DE. 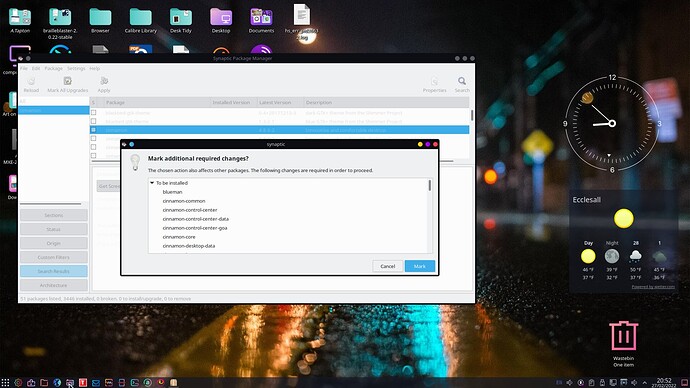 I have learned the best way to install an app is to use Synaptic. I just used the search feature of Synaptic and then clicked on Cinnamon DE. Synaptic will then tell you you need several additional pkgs installed also. Just click okay and then apply and watch Synaptic do its thing. There is also a tutorial on this forum that gives instructions for installing alternate DEs using the terminal. Either way should work. I really like Cinnamon because I can make the desktop and task panel just like I want them. The longer battery life is a nice extra.

After you have rebooted to get Cinnamon installed and selected it at login from then on if you just want to change DEs you can just log out and select the other DE without having to reboot.

I'm working on this nuci3 right now to do some updating, was running on the old kernel.

The thing is I don't have/use synaptic, just do everything for the command line that's why I questioned about the commands.

Or for full desktop (including Firefox and it won't let you remove it...)

The Cinnamon Core that Aravisian has posted commands for is what I am using. NOT the full Cinnamon Environment.

thanks cifta, for the replies.

When I'm ready installing Core (I know that the machine can run it because it ran 15.3 easily) I will try the cinnamon DE to see what it does while also running a virtual environment, did is also with the 15.3 version.

Also, don't fret not installing the full environment - Core installs pretty much everything you need.
Full comes with Firefox. And it depends on Cinnamon Desktop so removing it will remove Cinnamon. Which bothers me. A lot.
The very few other things it comes with are xapps which can easily be installed separately.

Core installs pretty much everything you need.

If this is so, why would I install Cinnamon full. And I don't wanna get stuck with software that can not or be difficult to remove.
That would only discourage someone to try it.

Agreed. I would need to look over the package lists to know All things that are different between the two... but offhand I can say: not much.
The only noticeable difference, to me, is missing certain frills in Full, like Firefox and extra Themes and Icons.
And I kinda do my own thing on that front ...

I had the full environment installed on one of my desktop PCs. The biggest difference besides Firefox is as huge amount of simple games were also installed and I believe there were a couple of picture editing and graphics programs installed. But any of those can be installed without all the hassle of having to remove a bunch of stuff you may not want. I kind of prefer to pick my own programs for those kinds of things.

I know already, that I wont be installing the full version. Just like with Core I always de install most of the apps and just add those that I am use to.

Yep me too .... I've been using that for several months and love it .... I added all the programs I needed as between Cinnamon .... XFCE and Gnome I have lots of extra apps that are installed automatically ....

Having multiple desktops helps a lot when trying to solve problems with hardware and apps cause you can try it out in a different environment ....

I don't have a laptop problem with storage or speed .... but I ain't in the class with Aravisian with his new powerhouse ....