Hi, this is the second time I installed Zorin OS, I think is an amazing OS

I have installed it on a Dell laptop as described above, I installed wine using the command sudo apt-get install zorin-windows-app-support and it just worked fine, I tested a surveillance program called contacam and worked wonderfully, but now Im trying to install a BIOS update witch is on the .exe format but when I run it, it displays an error message.

I tried both, “open with: install windows application” and “open with: wine windows program loader”, but the same error

If this is not the way Id like to know the right procedure to update my laptop’s BIOS version, thank you for your time. 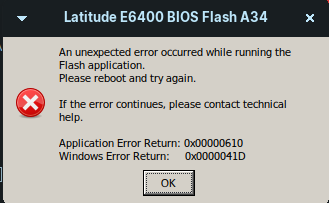 Hello @servitec, welcome to the forums

Wine will not work with BIOS flashing tools made for windows. If that does not work you can try Hiren’s BootCD PE