Legal worries with Fedora and OpenSUSE

I'm sure you guys have heard about Fedora and OpenSUSE dropping support for VA-API for specifically AMD chipsets. (This will prevent hardware acceleration for h.264 and h.265 videos)
This process would apparently be contained to these distros but this action starts the following thought "What other functionality will be next ? Maybe it'll be Zorin that comes next"

I know people will find some workarounds with it... they always do..
And all of this over a chance that your hardware vendor may not have paid the royalties.

Anyways, just wanted to know other people's thoughts and feeling on this issue

Anyways, just wanted to know other people's thoughts and feeling on this issue

Excepting the ZorinGroup making a direct announcement on this topic, any expressed would be the opinions of Zorin OS users.

I know people will find some workarounds with it... they always do..

Easily, they already exist. The issue is that Fedora and OpenSuse will not include them bundled for you...

And all of this over a chance that your hardware vendor may not have paid the royalties.

Kind of.
This topic really raises the fundamental question about the viability of Software Patents.
Which could make an interesting discussion. With the caveat of course of "attack the idea, not the person."

However, as it currently stands, the patents do exist. Whether a user agrees with or disagrees with a patent is not relevant.
The reason Intel is in the clear on this is because intel includes the bundling as the Final Product.
However, Nvidia and AMD both outsource GPU assembly. Many users on here have Nvidia or AMD graphics card that bear some other Brand name; self included. My Nvidia card bears the name EVGA.
Because AMD does this, too... The final fee is rolled into the selling price. Often, this means it is rolled into the cost of the Operating System.
For Linux, the Operating System is free.
And... then you can see where the problem is.

Let's be realistic... Linux has less than 2% of the market share. Of that, some of the sales are made by companies like StarLabs, who can bundle that price in.
So is AMD at a high risk of profit loss here?
No... Not really. And I think it is fine to be brutally honest and say, "if they get worked into a wad over it, it's just pure greed."
And... it really is.
That, and the principle of it. The problem is... The principle of it is where the problem is.
IF AMD lets it slide, for a small market, then it risks opening doors it may prefer be kept shut.

So, Fedora and Suse had a choice: To respect patents and laws. They chose to respect it.
Will some users who want pre-bundled software for free at minimal effort to themselves complain about that choice?
Of course they will.
They are, after-all, entitled.

But Linux as a whole does not need the stress or the drama. It does not need to be further vilified as the entity that does not respect developers work. It does not need to be promoted as an entity that disregards patents and will, in essence, combine proprietary code with FOSS only for the sake of doing so.
And in the extreme case that AMD did decide to actually sue over it if the patents were not respected, Linux would have no way of winning such a suit, much less afford the bad publicity from it.
These Big Companies- Linux Developers still need to work with these guys. And flattening their toes with an all-mighty attitude of entitlement is not going to work out very well.
And AMD already is only nominally supportive of Linux. AMD talks the talk but does not walk the walk.
What Linux needs is these companies to respect Linux and if Linux cannot respect others, how can it be respected?

"What other functionality will be next ? Maybe it'll be Zorin that comes next"

Only the ZorinGroup can weigh in on whether they have any stake in this particular issue.
But for the question of "what functionality will be next..."
Well, I can apply that to Gnome, easily, given its own behavior over the past Decade. I mean really... if users will get worked up over a couple of codecs which can be assembled into Mesa by themselves, really they should have been heavily rioting Gnome with torches and pitchforks for years. talk about removing functionality...
But for AMD and Linux: Probably nothing.
It turns out that patented software was being included in Linux drivers for AMD which was an oversight. This was alerted for Linux Developers. Suse and Fedora made a choice to act.
There is no evidence of any slope to get slippery on.

There is no evidence of any slope to get slippery on.

Thanks for such a detailed response, reading the reddit posts written by people with half knowledge can invoke an overreaction to the problem.

hey should have been heavily rioting Gnome with torches and pitchforks for years. talk about removing functionality...

Oh my god, I hadn't even thought of that

Fedora have RPMFusion repositories for all that are not included in the official version.

Notice the response is from red hat and the open SUSE project.... both have been around for quite some time, and one of which is attempting to be the Microsoft of Linux.

Since Zorin is based on Ubuntu, what cocanical does will help set the stage for further responses. Of course each distro will have to consider it and whether to pay any royalties/dues.

This begs the question of whether Linux Distros offer free versions, and the functionality of those versions. AMD is half of the cpu/gpu market.

Fedora yes but not Nobara. 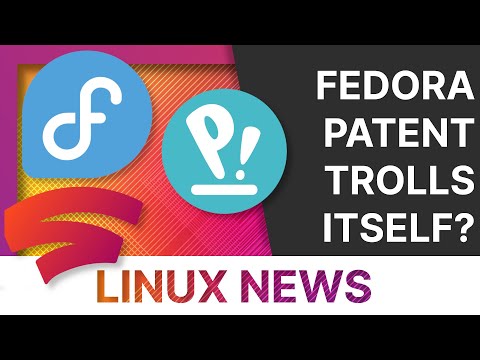