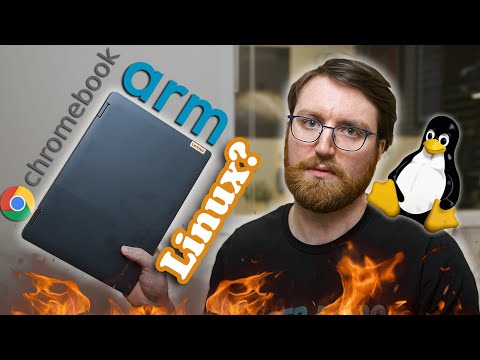 Just trolling. His ARM laptop was not listed.

Its hit or miss, many chromebooks are locked to prevent other os's being installed, popular models have root-mods to allow you to get around it. lenovo is one of the better brands to use, but many of these cheaper no name brands its near impossible. For arm based chromebooks, i use rpi imager and download ubuntu through there.

The answear here is this isn't easy to installing on chrome.

By Design, same with android devices. though easier as there are more guides and projects for android. Its stupid imho, if I buy something i should be able to install whatever os i want to, with out having to be

Since Chromebooks are not designed as personal computers in the first place, Chromebooks send all data to cloud and personal space is non-existent. So it would be unreasonable to install any other operating system.

I just gived info if linux can be used on chromebook.

Well, can't blame someone for trying and assume things should work out of the box. Except, unless it's guaranteed to work by the manufacturer, that's a very silly thing to assume.

Now, I had to quit watching a few minutes into the video as I can't stand this type of over-hyped content. But I can't see why someone who runs a tech YouTube channel can't be bothered to check the compatibility of the hardware upfront. More so being an arm device.

I've tried and used a number of Linux distributions on a Chromebook for years. Not all of them work flawlessly but you can easily find out through a live USB first or ask around the various communities.

Chromebooks are not designed as personal computers

I don't think I agree with this. Personal computer is just a computer anyone can buy for their own use. A chromebook was designed to be a cheap alternative to cover the basic needs like web browsing and writing documents.