Hello, I have been running Linux as my daily driver for a total of 1.7 days; so I suppose I am as much of a noobie as it gets.

However, I am eager to custamize my OS and I am not afraid of the terminal.

I was wondering, do any of you know how one might go about changing the lockscreen backround, I've done some googling but have been unable to find any help for zorin-16.

Welcome to the forum.

Zorin 16 is based on Ubuntu 20 for future reference. Meaning, searches for Ubuntu 20 regarding issues or software will provide answers that will work for you.

Install gnome-tweaks and there is an option in there. In terminal (press ctrl + alt + t to get there) type:

Thanks!
I see this opens the customization options quite a bit.

Not to be a nag, but the lock screen background option doesn't take effect (even after a restart); any thoughts?

Yes, I found that to be an issue apparently one of the Gnome updates broke that extension.

TBH, just install Cinnamon or another DE and you'll save yourself a ton of grief. I went with Cinnamon and have my lockscreen how I want it. Along with my task bar, using little to no effort or grief.

Edit: Also use Lightdm instead of Gdm

Thanks for replying; I found a gnome exetension tutorial that worked well. 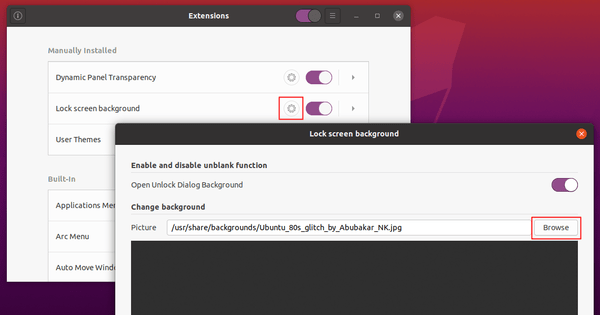 How to Change Lock Screen Background Wallpaper in Ubuntu 20.04

The lock screen background option is removed in the settings of Ubuntu 20.04 Gnome desktop. And now it uses blurred desktop wallpaper as the background of lock screen. Still want to change the lock…

I also prefer LightDM. It is more configurable, and less glitchy and prone to failure than GDM is, especially with gnome-extensions.

You want configuration ability... try kde, you'll be buried in options and ssdm isn't all that bad. I haven't had any issue since installing.

Similar to gnome with more options, software availability and customization that would rival XFCE (without touching one text file).

I just started playing with a Distro (MXlinux) using the KDE Plasma DE and I'm liking what I see. It's early to judge at this point. I'll do the same with XFCE and see what all the interest is. My system can handle plenty I'm not restricted to RAM usage or space etc... so that's not a issue.

What kind of machine are you running? What are the specs if you don't mind me asking.