Be warned, I suspect pkexec will not work on gnome as it does on XFCE... but it is worth trying real quick.

Nah don't bother, I'm done with this OS....it's been on for an hour and all i've done is got the bluetooth mouse working....TOTAL waste of time...I've been flitting arounf several distros, and while this one looks pretty, and has lots of games (not needed) it's a waste of money. All I wanted was a MAC OS look (Like Elementary OS) which is why I bought it...the spin on the website should be either changed or removed. Having the other stuff I guess was bit of a bonus.

And I ahve not even go the the Audio workstation setup yet, god knows what issues are going to conme up there!

No it was alearning experience, I'll not be recommending it, rather I'll be telling people to avoid it unless they want to just surf the web do some office work and play little games.

Thank you again for the time you put out to try and help. It was appreciated.

No it was alearning experience, I'll not be recommending it, rather I'll be telling people to avoid it unless they want to just surf the web do some office work and play little games.

I have been using Zorin OS for a couple years for far, far more than to surf the web and I never play Little Games. I use it for a lot of Graphical work, high speed compiling, word processing and data, records. I do not do as much with Sound as many others do, so cannot comment on that.
Elementary OS has the same set up, the same procedures for applying themes. The only difference I see here is that it comes with a Mac OS look alike theme already loaded. If you wanted to change it, you would need to undergo the same process.
I certainly understand your frustration. I have not been a Linux User for very long, myself. I recall all too well that first weeks learning curve. But a learning experience it certainly has been. One for which I am grateful as it released the chains that Mac and Windows once tied me up in.

Given your frustration and how discouraged you are feeling, I would strongly encourage you to PM @azorin and raise your concerns. You purchased Zorin OS Ultimate for a reason very recently (today, even, I think). I am certain he would be glad to help you resolve that purchase or help you with your installation.

Linux Distros also come with different Desktop Environments that offer different functionality. When I first moved over from Windows to Zorin OS, it was on Zorin with Gnome. And it was very frustrating. -chuckle- Very. Gnome is very controlling, in my opinion.
By chance, I tried out Zorin Lite and suddenly, I had much more control, much more user friendly desktop actions and much, much less frustration. I never went back to Gnome. So you may also have more luck in the same way- only you can decide that.
The copy of Zorin OS you have includes a copy of Zorin OS Ultimate Lite (XFCE desktop instead of Gnome), so you would not need to try anything other than installing the Lite OS, instead.

Thanks, but does Gnome Tweaks actually see those folders?

Just pasted the MAC OS folder to the themes one I just created, when I open tweaks it now shows the MAC os folder, but selecting it does nothing so still lots missing

It should, when I was running Manjaro it had no problem to do so. But on Zorin OS 16 I don't have Gnome Tweaks installed. I change the themes/icons with Zorin Appearance. 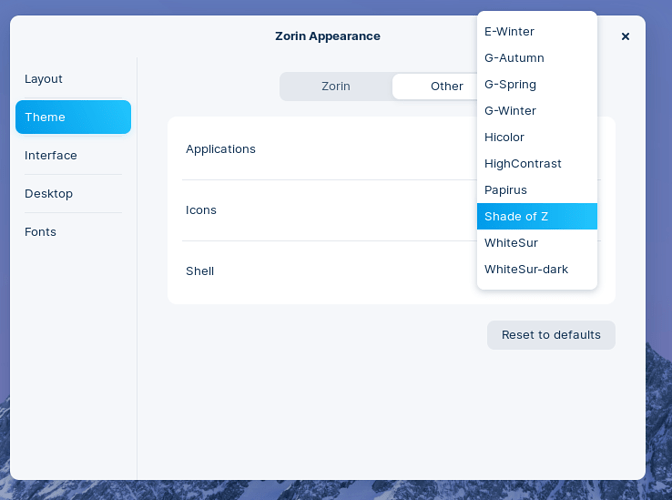 hmmm, ok thanks -as I wrote, still much to do I think. I am in that window and I can cleary see the MAC folder, maybe i should try moving the contents directly to the themes folder?

Make sure that the Mac theme isn't "double folder". In ~/.local/share/themes the theme folder should look like "Mac folder" and then its content.

If Gnome-Tweaks (or Zorin Appearance) is not seeing the theme:
As Storm pointed out, sometimes the Theme developer double wrapped by accident. Theme needs to be as /themes/(whatever the theme name is)/(the direct theme contents)

It also must be extracted. If you downloaded it as a .zip or a .tar.gz, just right click it and choose "extract Here" while the .tar.gz or .zip is in the themes folder. Or, extract it in downloads, then move the whole folder to /themes.

If you move the elements directly to the /themes folder -it will not work.

If you like, you can paste the link to the Mac theme you downloaded and I can take a look at it.

You see, again this is explaining how a whole lot of other stuff needs to be done...this is certainly not o.o.t.b. and again the website strongly indicates it is a mac like desktop look, it does not say AFTER installing several other 3rd party packages!

Elementary OS does it from the get-go, perfect!

I am so unsatisfied with this distro I paid for.....I have asked for a refund, but I am not holding my breath waiting!

PS: I replied to the PM as well.

The look and themes work out of the box using Zorin Appearance.
You do not need to install any apps. Installing Gnome-tweaks is just One Method of using a GUI tool to customize the look and feel. Zorin Appearance is a method supplied by the OS.
The only thing you really need to do is Open Zorin Appearance and adjust the settings.
Since you stated that it did not look enough like Mac OS, we offered help in installing and using Third Party Themes.
I do not think that moving a theme into a "Themes" folder is an unreasonable amount of work. It is no more work than moving your documents into the Documents folder from your external drive. Or moving any of your files.
It is not unreasonable to say you need to unzip a zipped file.

EDIT:
Here are a couple guides for installing and applying themes on Elementary OS:

How To Customize The Pantheon Desktop

How To Customize The Pantheon Desktop

How To Install Themes And Icons In Elementary OS - It's FOSS

Read how to install and change themes and icons themes in Elementary OS to give it a different look.

You may note that the details in the second link are extremely similar to the ones we provided here: For example installing Elementary-Tweak-Tool (Since Elementary OS does not come with any app for changing the theme like Zorin Appearance in Zorin OS does), extracting or installing a theme in the /usr/share/themes directory and applying them with the tweaks tool.