Well, my question is a bit strange.

I'm considering buying a mini PC.
While searching for an option, I stumbled upon a website where I could choose the mini PC case, PCU, GPU, etc and the Operating System. Moreover, I could choose Zorin 16 to be installed on it!

Now, I thought that I could remember the name but unfortunately, I cannot find the website again. There are some options of mini PC Builder but none have the option to have Zorin 16 installed.

I would like to find this website.
Do you know some websites where I choose a mini PC with Zorin 16 installed?

Intel Linux Mini PC is one advertised on the Zorin OS website, but the company offers a number of mini options at different prices. All are pre-built but can be configured during the purchase process.

If you use a browser that saves your search history, I would suggest combing through it.
Your question is not strange, it is just that there are a lot of computers out there that offer Zorin OS installed on delivery. This has been going on since Zorin OS 8, at least. And a very quick search showed another old weppage offering Zorin OS 10:
https://www.asrock.com/mb/Intel/J3060B-ITX/

And if you really want my opinion, then your going to want to post the link to whatever computer you choose to buy, for me to look over, before you make a purchase.

The biggest downfall to mini computers is always thermals. So thats why I say I need to see it, I need to see what hardware is being used in the mini PC. Because if the hardware is too high performance, that computer is going to die an early death.

I will give you perfect examples of good and bad!

Mini PC that uses an Core I5 APU or IGPU with a frequency no higher then 2.2GHZ to 2.8GHZ. A computer that uses DDR4 2400MHZ to 2600MHZ RAM, or the same spec in DDR5 RAM. Also uses NVME M.2 SSD drive or a SATA SSD drive. NO MECHANICAL DRIVES!

Those are just a couple of examples, like I said, I want to see the computer you want to buy before you make a purchase. I would feel really bad if you bought a computer, and it die after a year due to thermal overheating.

And if you really want my opinion, then your going to want to post the link to whatever computer you choose to buy, for me to look over, before you make a purchase. The biggest downfall to mini computers is always thermals. So that's why I say I need to see it, I need to see what hardware is being used in the mini PC. Because if the hardware is too high performance, that computer is going to die an early death.

@LoveZorin didn't ask for our opinion about mini-computers, but I agree that thermals are a serious issue with the mini-computer form factor. Mini-computers (4.75x4.75x1.8 inches typically) cram too many heat-producing components into too small a footprint.

Mini-computers are tricky because of the form factor. Minis are just the wrong shape. I think that your advice to be very careful about the components is advice worth heeding.

Hello,
Thank you very much for your replies.
I was looking everywhere where in fact it was here in https://laptopwithlinux.com/
@tomscharbach thank you.

@Aravisian Thank you for the link, it is just that the main results I was obtaining had Windows or Mac as options.

@StarTreker Thank you for giving additional advice.
Well, in fact, I would like a fanless mini PC.
On my PC, I have some Noctua products and would like to go even with less noise.

Some mini PCs are heat dissipators by themself.

In brief, I am looking for a fanless mini-computer that has Zorin 16 installed on it. Since I do not play games except lichess (lol), I do not need a powerful mini-computer. However, I do tend to have many tab open in Chrome (25).
Looking at laptopwithlinux.com, I am not sure they offer a fanless option.

Looking at laptopwithlinux.com, I am not sure they offer a fanless option.

The Intel NUC10i3FNH case (and other Intel NUC models, which have an identical case) has screen venting on the left and right sides of the case, suggesting that the computer is fanless. 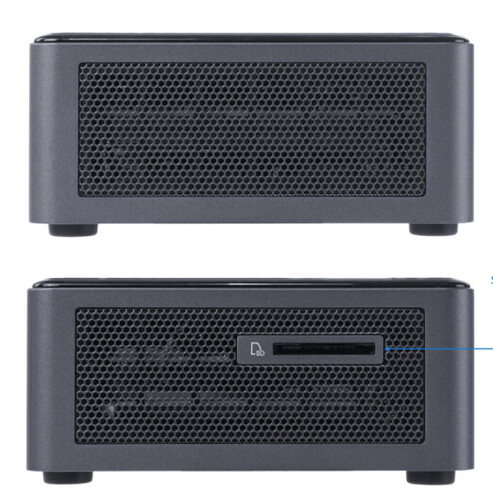 I found a U-tube review video that opens the same case, and no fan is apparent. 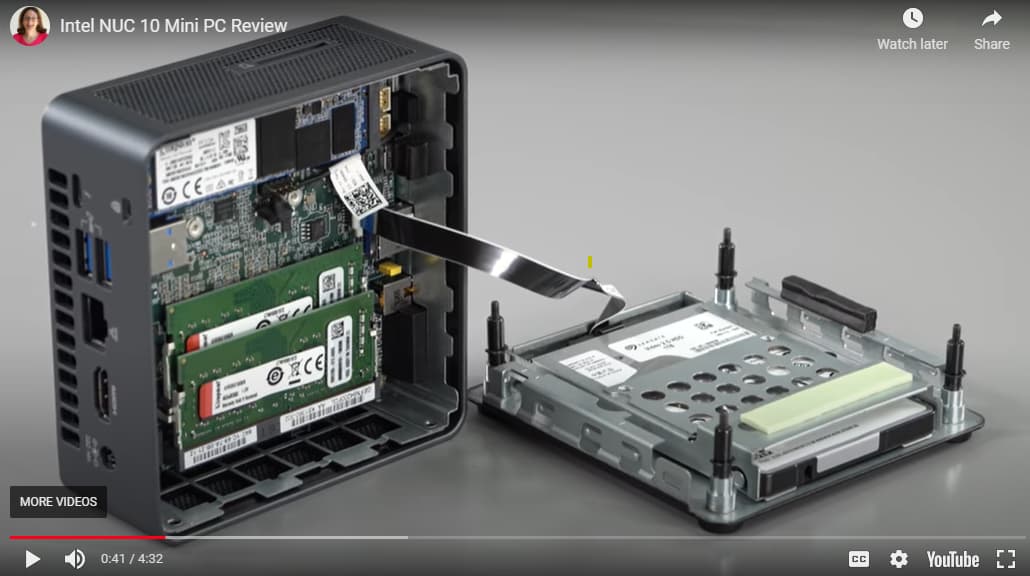 Why not narrow down to an Intel NUC model that you would be interested in, and ask customer support about that model? That's the only way to be sure.

Some mini PCs are heat dissipators by themself.

I saw one of those heat dissipation cases at railroad restoration/repair facility -- metal ribbed case, both fanless and ventless, designed for industrial use in dirty environments.

It looked something like this and was mounted on a testing cart: 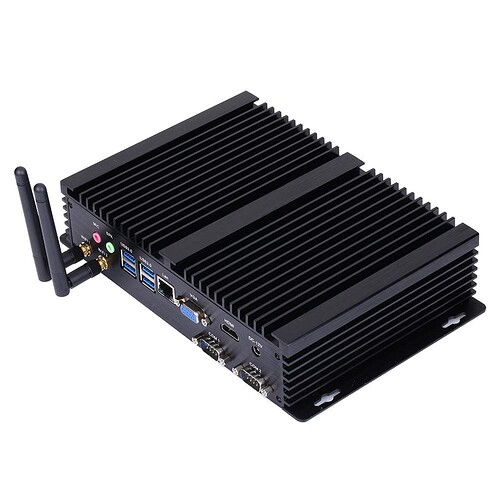 How they kept the ports clean is beyond me.

Thank you very much for the screenshot.
In fact, I've asked the customer support service via Whatsapp and I'm waiting for an answer.

This is exactly what I saw.
I'm inclined to think that the heat will be better dissipate than the Intel NUC model.
As the screenshot is suggesting there is no ventilator but I cannot see how the processor and the other component will effectively be cool down.

What do you mean by keeping the ports clean? Do you mean the ports that are outside? If so, aren't they as in a normal desktop PC?

What do you mean by keeping the ports clean? Do you mean the ports that are outside? If so, aren't they as in a normal desktop PC?

That's exactly what I mean. I volunteer about 500 hours a year at a railroad museum, spending about 150-odd hours installing/maintaining networks and computer systems, and the rest helping out in the shops. Believe me, absolutely nothing is dirtier than a steam locomotive shop -- I swear that a person could walk through the place without touching anything and come out with a half inch of grime sticking to his/her/their skin and clothes.

I do not understand really the difference between industrial models and the others models.

Many industrial computers are similar to consumer/business computers, in that they run Windows/Linux and have the usual complement of software; others are designed for specific workloads for machine automation, manufacturing equipment and robotics.

Could I just use this kind of industrial models for my home office desktop?

I don't see why not, although you'll have to pay very careful attention to the specs, because industrial computers often don't support things (sound, for example) that we take for granted in consumer and business computers.

But if you can find one that is uses standard components, and supports sound and other consumer/business-level expectations, the computer should work okay with Linux. in general, if a computer will run Windows 10 and uses relatively vanilla components, it will run Linux.

Probably be pricey, though, and I wonder if you'd be inventing a Rube Goldberg device by the time you were done.

You got me curious about Intel NUC mini's. It turns out that the NUC's have fans -- see the video on this page from Intel: 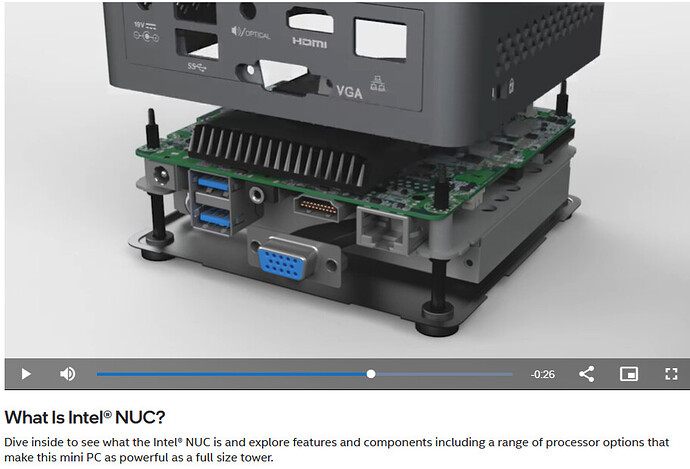 An interesting journey you are on. Keep track of @StarTreker's advice, though.

Why is fanless so important to you?

True they do have fans. Reachable from the top when removing the top lid. I personally have 3 nucs. Have Zorin installed on 2 of them. The 8 generation Nuc8i7BEH runs on smooth with Zorin16 and Windows 10 (also with Libreelec).

The NUC sounds like a good idea to me, I have been seeing video's of those on LTT, GN, and J2C. All of them had mostly positive things to say about them, and even though they are technically not designed for gaming in mind, they will do it.

Just don't do what Jay did and overclock it for science or better performance in games. Cause it was when he was overclocking it, that sucker got hotter then heck. Pick the NUC you want to get, post the link here, I'll check it out.

You should try out the "nucblog.net" there is a whole review on the Nuc10i3fnk/h. The most recent model is the panther-canyon
with a Intel Iris Xe Graphics card and of course the 11-gen processor (it'll cost you though).

And I can confirm the NUC has a fan, but is a quiet one.

I have this one. ASRock Beebox
Do you think so Zorin working on it?

I have this one. ASRock Beebox
Do you think so Zorin working on it?

The specs (see below) seem okay. The only issues I see are (1) the computer may have 2GB RAM (marginal) rather than 4GB RAM; (2) the processors are very low end and may not provide acceptable performance, particularly using Core; and (3) the computer may have a 32GB eMMC drive instead of a larger M.2 nVME or an SSD. I've seen reports about issues installing/using Linux on eMMC drives, and 32GB is workable for a basic Zorin OS install, but doesn't have a lot of margin. 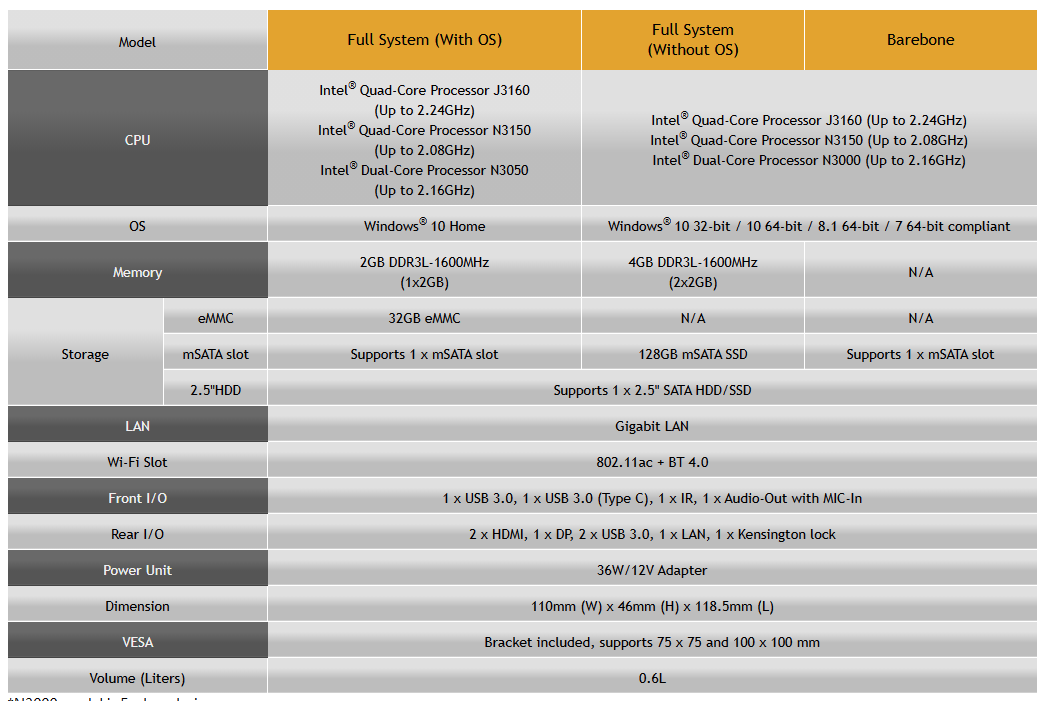 4GB of RAM should be the bare minimum spec, 8GB recommended.

Thank you for the reply.

I've received a message from Laptopwithlinux:

Hi, thanks for your message and interest! Unfortunately, we do not have fanless mini computers. The most silent mini-computers are our Intel NUC machines. Zorin 16 runs perfectly on these devices. Please see: https://laptopwithlinux.com/product/intel-nuc10i3fnh-core-i3-linux-mini-pc/