I'm forced to use a generic graphics driver right now.

I'm at the very end of reloading Zorin and all my apps, but when I rebooted for the last time, I got Windows 95 graphics.

"Additional Drivers" app isn't giving me the option to download Nvidia drivers. The list of drivers is grayed out with no explanation or advice about how to access them. The app has been like that since I reloaded Zorin yesterday. I expected maybe the problem could be corrected on its own, that maybe the servers were down. If so, they still haven't recovered.

Is there a simple way to correct the "Additional Drivers" issue?

Or could I at least fix the graphics issue for now?

-I've tried changing the sources on the AD app's lists. I have Canonical Partners checked, and have all the Zorinos sources checked (but not for the source code).

-I downloaded the drivers from Nvidia's website, but it's a windows package.

-I also plugged my Zorin thumb drive back in and found the video drivers there. But "Additional Drivers" won't look for them there.

-I might try to unload and reload the AD app. But again, that has to be done from the command line.

By myself, I likely won't get any of those done before you can help. It's probably something very simple, but if it's the servers, I'm screwed.

UPDATE: I just found the option to change the server mirror. I'm waiting to see if it works.

Which Nvidia card are you using?

Can you open Software & Updates and on the first tab, under "Download From", ensure you are set to Main Server
Close that out, then open a terminal
Run

You may launch Software & Updates > Additional Drivers again or just stay in terminal and try;

UPDATE 14:25- That last option didn't work. It looks like I'm going to need to get an encryption key, which I think would involve using FTP, which I've never done before. But I'll try it.

That last option didn't work. It looks like I'm going to need to get an encryption key

Hmmm? Do you have Zorin Installed with Secure Boot enabled in your BIOS? Are you dual booting with Windows?

No, it's a single OS. I'll have to check my EUFI BIOS, but if it's not set by default, I almost definitely don't have it set to Secure Boot Enabled.

but if it's not set by default, I almost definitely don't have it set to Secure Boot Enabled.

It usually is set by default.
Secure Boot is for Windows only and is useless on Linux.

Secure Boot operates to ensure that only Windows vetted packages are loaded.

The only thing I found that looked related. was a setting for Secure Device Support. I guess that could be the problem, but that wouldn't explain why the AD app could download on my previous install of Zorin.

You know, it occurs to me that it could that damn war. Were the servers located in Russia or Ukraine? Russia's been locked down against the Internet. I'm going through the many different mirrors listed. Like I said, the first one said the transfer couldn't be made securely.

I switched to one server in Taiwan and one in the US (Babylon). Both failed. I took a screenshot of the error message for the US: 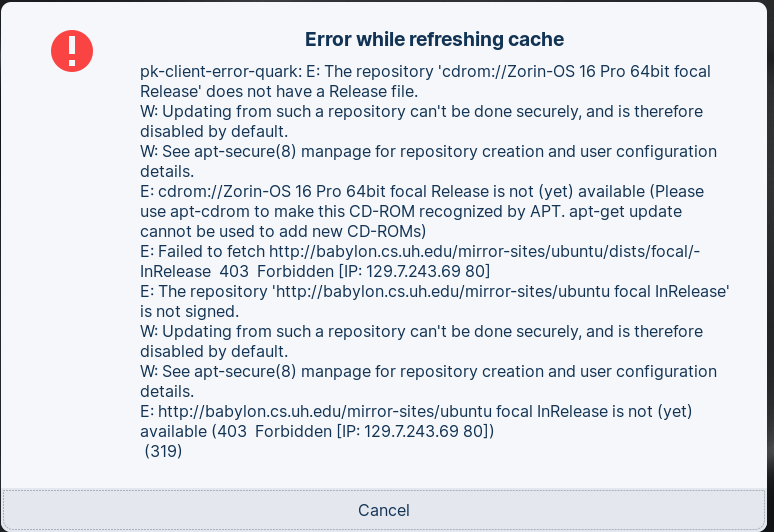 Is Zorin Already Installed?
If so, you should have CDROM:Zorin unchecked in other software tab of Software & Updates

Hey, this one did the trick! I've rebooted it, and it's looking good. I knew there was some command-line solution to the problem. I've copied and pasted these into my notes. Don't worry, I have a cheat sheet of commands now, and I intend to learn them. Thanks!