My pc has became slow

Hey there
I have a PC with Zorin in it. Last week I had installed extra 2 GB of ram in my pc. Previously I had only 4 GB. After this upgrade, my pc has became very slow. Now it takes 4x more time to boot into the OS. And when I had checked my task manager, it showed that my pc has 2 GB of Memory (or RAM) and 2 GB of Swap File. As of I think the 2 GB of new ram should be added to the the Memory instead of Swap File. Maybe this is the reason why my PC has became very slow. How should I improve my PC speed?
Valiant Boy

So it should show 6 GB RAM if I understand it correctly?

If you remove the additional memory, does the computer show 4GB of RAM as before? What if you switch the original 4GB from one slot to another? (I assume that you have 1x4GB RAM, but two slots in total).

I'm not very knowledgeable on hardware but I would first make sure that your computer can actually handle that kind and amount of memory. I.e.: the speed on the new memory is compatible to the mother board you are using.

It may that your motherboard can't handle two different size of RAM. Usually you have to go with a pair of the same size. I don't think it's a problem with newer motherboards but some old ones have issues.

I agree I have found in the past that it is much better to match the new ram with the existing one .... I don't even like mixing brands .... but that is just me ....

Could be many things, but most likely mismatched ram. CPUS especially ryzen are sensitive to ram speeds, if you have both sticks on the same channel that can cause issues, try moving the new stick to the second channel or remove it and replace with a matching stick. Ram will always downclock to the lowest speed, and if mismatched will not auto "clock" to optimized speeds, so you will get the slowest possible configuration.

Sorry for my wrong explanation. Previously I had 2 Gigs of ram and i have installed 1 more stick of 2 Gigs ram. The newly installed ram is showing in swap memory section.

Hi, your new RAM won't show up in swap, that is software RAM. To check what you have physically you should boot your PC into BIOS and look at page which tells you about installed memory.

There is also a program called Stacer which shows you how much Memory you have and are currently using along with other things related to your computer .... (see photo below) .... I have 16 GiB of memory .... If you want to try the program please be careful with what you are doing as you can change a lot of things on your computer .... just read before you use .... 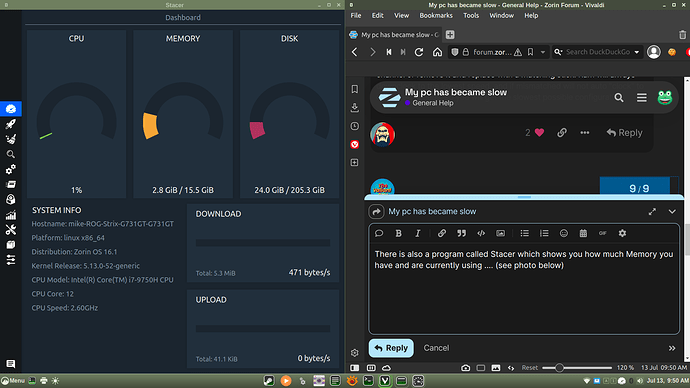