No problem with Zorin, but

is zorin 16 an eternal beta? 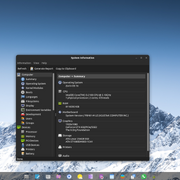 The about has not had the beta label at all... not that I've experienced (alpha neither if i remember correctly). I have screenshots in the alpha/ beta thread that prove this. Not all developers bother with such things, it's less to remember to remove later. The Zorin's have enough to do without worrying about minor details as labeling an about screen with alpha or beta to remove later.

Edit: no... as has been posted a few times in this forum, it will be officially released shortly... ensuring a little issue as possible is what they are doing and I'm glad for all their efforts. Once again though, clear communication from them would assist in avoiding negative speculation.

I do not understand what the OP is asking.

Tonho, how do you round the corners on the task bar ?

Sounds like Zen Mondo. One of the most enigmatic questions I've ever seen.