I keep hearing this distro is designed to feel good for Windows switchers, and it is, but with some playing around you can make it kinda Mac friendly as well.

I’ve been using the 3rd layout offering in Core – 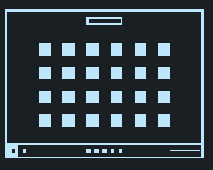 – and I’ve really liked it, but it has a problem. It limits how many apps you can keep centered and how much ‘stuff’ you have on the right hand side of the panel… since the share the same space.

Those red arrows point out the cramped space available.

Well if you go get Gnome-Tweaks from the Software Store, you can start to play a little.

Tweaks allows you to turn on an extension called Dash. 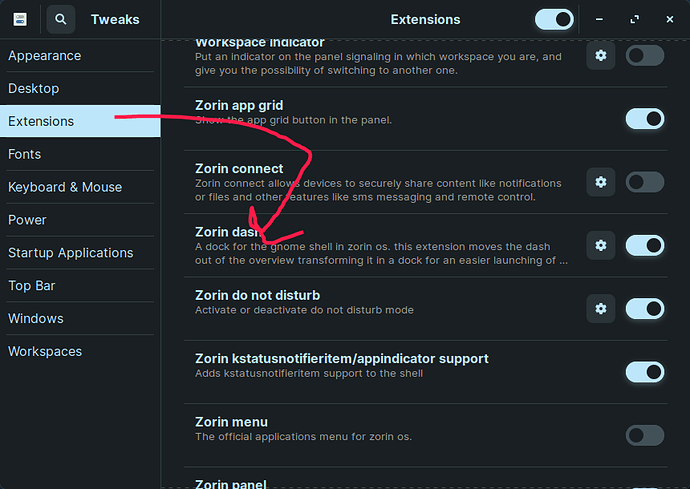 This allows you to install a Gnome ‘dock’. It doesn’t look and behave identical to the Mac OS dock but that’s okay.

Why I like it is that now I can move the panel to the top of the screen, narrow it, and remove apps from it. Yes, that’s a Mac thing, but the reason I do it is so, again, I have more room for my apps centered.

The first thing I did in Windows was seek out a Hot Corners solution. Can NOT live without it. I’d rather live with buggy Windows than a painless LInux with no Hot Corners.

There are many apps and extensions out there but, yeah, they’ve all got shortcomings. A person who has used hot corners wants a simple thing: one corner reveals all open windows and another corner reveals the desktop. For some reason that latter one isn’t happening.

The former is, but in a restrictive way: top right corner only.

I prefer left but hey – that’s how I vote too. Anyway this extension works really well. Halfway there is half full glass for me. 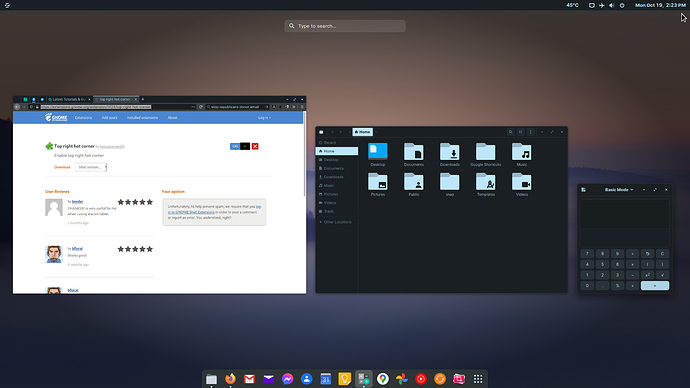 Since I don’t use multiple desktops I turned them off somewhere. (I’d guess Gnome Tweaks but I’m not certain.) That’s why you don’t see a bar one the right offering desktops. Nice and clean.

This entire topic may sound nitpicky but the result is an OS I can recommend to others as ‘similar to Mac OS but half the cost of hardware’ and ‘noticeably prettier and sturdier OS than Windows’.

That’s why people like me absolutely harp on Hot Corners being native. Or at least an external app the works perfectly. And that goes for trackpad gestures too.

Oh yeah. See how the background pic is Zorin’s purple haze picture? And I haven’t changed the icons? That’s because it’s nice to let Zorin be Zorin too.

Thanks Swarf --but that was one of the apps with shortcomings. The trigger is too slow and fails half the time. Plus the reveal desktop option doesn’t work.

This needs to be native. Or at least in Gnome Tweaks.

HI, not sure what version of Gnome shell is running in Zorin but if you click on drop down on that extension page it is compatible with 3.36.