(Poll) Which desktop environment do you use on your daily machine?

Just looking for some data on which environment you trust the most, run the most and prefer the most?

In fairness... I voted based on what I use the Most. Cinnamon is also used...

In fairness... I voted on based on what I am currently using on two different machines.

Am I happy about it? Hell naw!

Will I be using XFCE to have a better life in the future? Hell yes!

When will I? When Zorin's release Zorin OS 16 LITE.

Just looking for some data on which environment you trust the most, run the most and prefer the most?

I voted on based on what I am currently using on two different machines.

Am I happy about it? Hell naw!

The O.P defines the poll on Trust and Prefer, as well.

In fairness... I voted Gnome as I have Core and can't be bothered to change it. I am toying with the idea of trying XFCE when Z16 Lite comes out of the factory

@StarTreker 's post sums up my choice and my feeling about it to a 'T'.

(Poll) Which desktop environment do you use on your daily machine? Chat about Zorin

In fairness... I voted on based on what I am currently using on two different machines. "Gnome" Am I happy about it? Hell naw! Will I be using XFCE to have a better life in the future? Hell yes! When will I? When Zorin's release Zorin OS 16 LITE. [Startreker Signature]

Maybe this poll should have been run after the release of Zorin OS 16 Lite for more equal footing.

What have I done?!

Feren i heard that many times.

I voted Gnome, because right now I'm only using ZorinOS core with Gnome DE. But I also trust and prefer KDE.

xfce because i liked simple and eating lower ram. Can using i3 and tilling.

The results of this poll are what was expected in terms of which DE would get the most votes. It seems that whatever OS forum you poll, the major DE for that OS usually gets the most votes. Take a look at polls done in Fedora, Ubuntu and Linux Mint forums below. 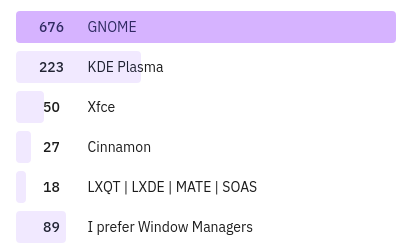 Gnome has been the king for many years. But its like TOSS has said, Gnome has been around in 10-years, supposedly still in development this entire time. And in no time, in those 10-years, has Gnome improved on bit.

It still as slow as its always been, and if anything, Gnome has removed feature sets. So why is Gnome the most popular in most distro's? Perhaps because its been around for 10-years, its well known, its well used in distro's.

But, here's the thing, Gnome has angered many people in the Linux community, most notable, System76, since POP OS news in the lime light, is that they are now developing their own DE.

You have to ask yourself, why are they doing that? They wouldn't do that for no reason would they now? Thats right! Its well known, that System76, and Gnome haven't been getting along when it comes to development.

Its very clear that System76 has given Gnome a chance to make it right, plenty of time infact, to make it right. But Gnome has chosen to go their own path and listen to nobody but themselves. System76 is like, oh yeah, well then were gonna make our own DE.

So were basically witnessing the final results of Gnome being the bag of stale potato chips that they are. Its time for change, POP OS is doing it in development of their new DE. The question is, what will Zorin's do?

They have been completely silent on this, I haven't been able to get a peep out of them. I guess they just want to surprise us? At the end of the day, its time for Gnome to go. Running on Gnome just because its popular, is not a good reason to use it.

Of course I am speaking on development side of things. As users, we can choose to make whatever choice that we want. Install a different distro entirely, or install a different DE on Zorin OS. I understand that!

But I am talking more about the development level. Clearly System76 made their choice, and I think its a solid good one so far, we will have to see once the DE is finished and users can test the new DE and confirm weather its better, or just as good, or worse then Gnome DE.

Yep, this was all I saw from System 76 on their new DE:

Michael Murphy, Pop!_OS maintainer for System76, said "Although the new desktop will not be a fork of GNOME, the developers do plan on reusing some of the current GNOME tooling, such as Mutter, KWin, and Wlroots. On this issue, Murphy said, “We’re already using gtk-rs for all of our stuff. My assumption is that it’s likely to see some components in GTK for the foreseeable future.” Murphy continues, “The shell itself though is lower level than a traditional desktop GUI toolkit. It’ll use primitives from the window manager it builds upon. If a mature Rust GUI turns up, then it could be used in the future of course. I’d generally like to use the best tools where possible.

The System76 desktop will also be distribution-agnostic, so it won’t require Pop!_OS to run. As well, the developers plan on sticking to (when possible) the standards, set by FreeDesktop."

This table vote are little tricky. Maybe because how distribution are build with there performance. True is always somewhere in middle. Last time a dreaming Zorin was in cloud server.

why is Gnome the most popular in most distro's?

Maybe because it looks cool by default??

I would have never tried XFCE had Gnome not been so sluggish. KDE also looks good by default and can be customised easily.

Went with KDE, but in fairness, this Gnome environment doesn't have a Gnome feel to it, so that is a massive plus. If you could take what 16 was out of the box and add a KDE style panel, it would be great.