Well my reinstalling Zorin 16 Pro using Rescuezilla went extremely well UNTIL I tried to update NordVPN using the terminal ..... I went online and found these instructions .....

"The only exception for automatic updates is NordVPN’s Linux app. If you’re wondering how to update NordVPN for Linux, simply run these commands:

Once done, you will have the latest NordVPN version. "

The third command worked fine and NordVPN was installed ..... HOWEVER .... I noticed that my Bluetooth keyboard was disconnected ..... and it took forever to get it connected again ..... I seemed to have a big problem using the terminal to load certain programs mostly telling me I didn't have permission ...... even though I used sudo ..... it gave me some suggestions but when I copied and pasted these suggestions .... as I have done in the past ..... in the command line these didn't work with no further suggestions .... there were other problems but to numerous for me to remember ....

When I got up this morning and opened Zorin it took 4-5 mins. to load to the sign-in screen and it was totally different that the normal Cinnamon sign-in screen .... sign in box was completely different .... didn't take a picture .... and the background had changed ..... signed in and again took several mins ..... my Bluetooth keyboard didn't work again and my wallpaper I used yesterday had changed .....

By the way I use Windows and Macrorit Free Partition Software ..... to completely wipe a HD as I've had problems in the past trying to format an OS while I was using it .... I find it much easier than gParted but that's just me ....

I'm off to install Zorin 16 Pro from Rescuezilla once again ....

Here is another problem I just thought of .... I can't change my NVIDIA drivers I get this message ..... 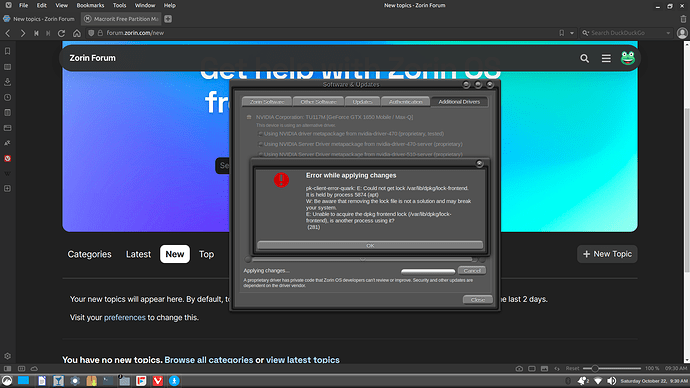 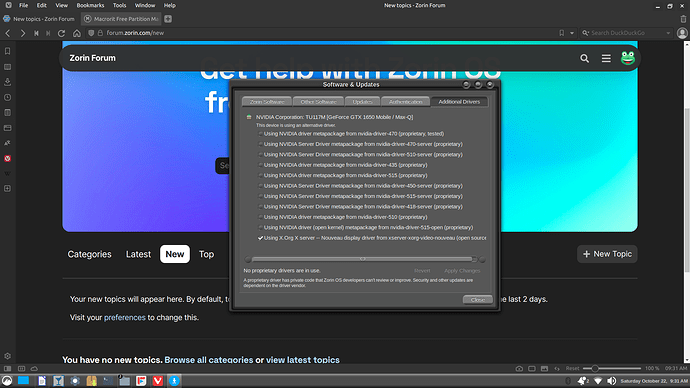 And another one terminal command .... 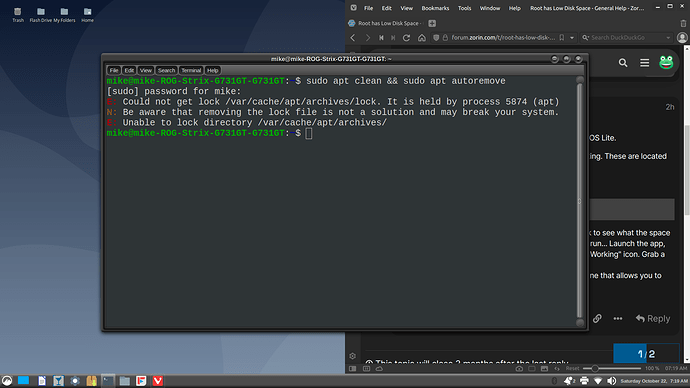 the could not get a lock on /var/cache/apt/* apt is already running, this usually happens when software updater is running in the background and you manually run apt.

for the bluetooth keyboard, sounds like an updated driver is causing issues, i would skip sudo apt-get upgrade and just do the following

then use the software updater to update Zorin itself,and look through the packages and uncheck any bluetooth related ones additional driver updates will be shown there,

Thanks .... I have Nordvpn installed and operational now after playing with it for quite sometime now th problem is it keeps telling me to sign in but when I try the stupid website says "OOOOPS something is wrong please go back to the website" ..... 0-and around and around we go ..... still working on that ..... looks like a browser problem rather than an OS one ..... all these programs on this version .... 12-09-2010 ... are way out of date including my browser .....

I really think I need to copy my Home Folder that I saved in it's entirely including Hidden Folders and paste it over this version I am presently using to see if it will up date this one ..... but I'm going to start a different thread on that so as to keep all this mess separate ..... good or bad idea ??????

I just backup my documents, and reinstall everything. I don't bother with settings and stuff. If my system is screwy it buggy I don't want to copy corrupted files or settings over, that goes for Linux window or macos.

OK so maybe just my Documents .... Downloads ..... Pictures and Videos ..... there shouldn't be anything in them that could effect anything or could there ???? .... no hidden folders

Here is another problem I just thought of .... I can't change my NVIDIA drivers I get this message .....

This only means that something else like Synaptic, Software store or a Terminal is running connected to APT.
Closing it will release the lock.

EDIT: All the other replies popped up. Weird. Anyway... I see SeanHinkley covered the above already...
Moving on:

there shouldn't be anything in them that could effect anything or could there ????

No, there shouldn't be anything in those folders that can affect system files and operation.

This is unlikely. If anything, the /.config files, if backed up, may re-introduce a problem.

I think you should run the command sudo apt upgrade but do not press the y key. Instead, copy and paste here the printout of what will be upgraded.

I already made a hard copy of the entire 42 pages are you sure you want me to post all that .....

Here you go I forgot I already downloaded them also .......

That should upgrade all the packages except those bluez (Bluetooth) ones.

I wonder if microcode and amdgpu1 are the cause of some of your graphics issues?
And why are ubuntu-release-upgrader listed at all? This is the Direct Upgrade feature, which is default disabled on Zorin OS until that tool is ready and deployed.

You have quite a few apps listed as Held.
Ignoring the LibreOffice stuff... Holding these back while the rest upgrades could cause conflicts in package dependent calls.
I do not understand why these are held.

Man...that is hosed up, and I don't even know as much as most others here do!

I have reinstalled Zorin Pro several times due to "me problems" and to me it looks like you may have been installing/removing other packages with Terminal while the system was installing/upgrading.

After you did your reinstall, did you copy over your original system settings? I would be tempted to do another install and select the NVIDIA drivers offered, and after the install wait a few minutes and let the OS settle itself and then use Software updater and get the latest Zorin, reboot and then use Software to update what it wants to. Being the known coward that I am I would not remove any packages until the system was on its final setup.

Sorry folks but I can't reply to you right now ..... I broke all my fingers with a hammer ..... now maybe I will quit tinkering with stuff .... I totally fowled up the new Zorn OS I just installed yesterday big time ..... I as so ashamed I didn't even bother to try and get help on the board .....

But all s well once again as I formatted the HD and reinstalled Zorn 16 Pro from Rescuezilla and we are once again on the road to recovery .... but this time I will make a new backup of Zorn on Rescuezilla as I don't quite trust myself with Timeshift yet .... I want to do this while EVERYTHING is working great .... cause you never know what tomorrow will bring ....

I totally fowled up the new Zorn OS I just installed yesterday big time ..... I as so ashamed I didn't even bother to try and get help on the board .....

Welcome to the club, newbie.

I totally fowled up the new Zorn OS I just installed yesterday big time ..... I as so ashamed I didn't even bother to try and get help on the board .....

I've done this so many times lol, there's a reason I will start suggesting a reinstall after a certain point, because i may or may not have wasted weeks on end in the past trying to solve self inflicted issues and it can get discouraging.

now the big question, was the hammer for construction, or were you fixing the computers attitude

... no it was for my fingers to keep reminding me to keep my busy fat fingers out of stuff that I had no business getting into .....

By the way all these turmoils I was having with my old wireless mouse and keyboard disappeared ..... they are now working flawlessly .... also the 3 buttons .... Min ... Max ... and Delete in the very top right hand corner are working just fine ....

Last night after I had reinstalled Zorn from my Rescuezilla backup and installed my old saved Documents .... Downloads .... Games ..... Pictures ... Videos and the .icons & .themes (only) from my Hidden Files I made another Rescuezilla backup just in case I manage to do something stupid again ....

I love Rescuezilla but last night I found something I finally dislike about the program ...... if you don't have enough space needed for your backup it will start backing it up anyway .... and after it didn't advance for more than 30 mins I had to abort it and clear some old files from that HD and start all over .....

Also the fact that you can do subsequent partial backups ..... it is either the whole drive or nothing .....

Timeshift looks like a much better option for that .... I did a whole drive backup of my old buggy system on Timeshift but don't want to install it for obvious reasons ..... I'm going to play with this system for a while yet to make sure it stays healthy before I try another whole disk backup with Timeshare ..... besides I need to learn more about the program ....

I finally got NordVPN to work .... I went to their website numerous times to no avail ..... even spent wasted time with their animated problem solver ..... it had me reinstall Nord and one of the steps was to run "sudo apt upgrade" again but this time with out the -y any way doesn't seem to be any problems with the upgrade this time but Nord still didn't work .... I kept getting a "no such command" or something to that effect ....

Well in desperation for some odd reason I went to Synaptic and searched for NordVPN not expecting to find it but there it was ..... downloaded it typed in a few commands in the terminal and got a web page to put in my browser ..... it opened to a sign in page and a few minutes later I was able to open NordVpn from the terminal once again .....