I have seriously tried to use this OS for about a year now AND I even purchased the Pro version. Tried it on 5 different laptops both Intel and AMD and it is either a PITA to install or mainly it is horribly slow ... slower than a snail. I fully realize this is falling on death ears and will either be deleted or relegated to the /dev/null file to never be seen again but I don't care - I have really tried Zorin OS and while it does look good the performance is terrible so bad I truly wished I hadn't spent money on it and I will never spend money on any linux again

Okay.... Perhaps the problem isn't the software but the hardware. Just a thought.

I'm not sure how Zorin is any more difficult to install than anything else, as long as one can follow simple instructions it's a breeze. Perhaps this is a PEBCAK issue.

As for the slow issues, once again seems to be a hardware issue and not a software issue. I have zero issues on both of my laptops with Zorin or Linux Mint.

I know you'll get responses giving you the "awww" if you needed help you should have asked or this or that... But quite frankly I'm not feeding that anymore with postings like this. It's tiresome as are these postings. If you don't want to use it, don't. No need to give an announcement about it in such a rude manner.

You're free to spend your money on Microsoft, nobody is stopping you.

And I have neither death nor deaf ears. The only thing I do agree with you on is that postings like this should be deleted.

If you didn't care you wouldn't have posted in the first place.... JS

I will never spend money on any linux again

Have you tried another distribution to confirm it's not a hardware issue? Anyway I fully agree with DeanG on this one. You had a bad experience for whatever reason, good for you for trying it out at least but extrapolating this to all Linux is pointless.

Never had an issues with both laptop or Desktop, but again both of them are running Nvidia cards, so I'm not sure what your problem is with snail performance.

But you seems not to ask for help in any threads I have checked. Why don't you start there instead?

Shouldn't this be in the feedback category?

If they purchassd Pro then they should have raised a ticket with Team Zorin to resolve the issue/s.

"What we have here is failure to communicate".

I know nothing about the OP's background or situation, but not asking for help here did not help he or she in the least. I would sure like to know what brand/model year these laptops were and if the installs were dual boot or not.

Thats a good question, help enough already here so the OP can throw his issues here

Shouldn't this be in the feedback category?

Changed to feedback as it seems to fit.

No one is silenced or banned for providing feedback or an honest opinion.
Posts or commentary may be removed that attack the person instead of the idea, Promote hacking or piracy or other clear violations of the Forum Guidelines.

I have seriously tried to use this OS for about a year now AND I even purchased the Pro version. Tried it on 5 different laptops both Intel and AMD and it is either a PITA to install or mainly it is horribly slow ... slower than a snail.

What year make and model were these notebook computers?
My experience with Zorin OS across a large variety of machines has been quite different... Zorin OS, in all my performance tests, outpaced Ubuntu even, as well as other competition.
Antix beat Zorin OS in regards to Speed, but that is to be expected... MXLinux hit even level, except for CPU usage which Zorin OS won handily.

Installation of Zorin uses the Ubiquity Installer which is the same as all of Canonical Distros and is very similar to Mint and MX.

As has been pointed out:
There may have been some things we could do to help (And that chance is not missed or anything).
But it may be that the hardware is too old, even in some cases. Not all machines can be saved...
And... I know from some time on this forum that AMD and Intel both, in spite of being amicable to Open Source - do have some driver issues time to time. We usually can fix'em.

I also checked his profile and in almost a year he has asked not one single question regarding help that I can find .... I really don't expect the OP to answer any of the posts above .....

It has been my experience over the past year that if you ask a question 99.9% of the time it will be answered or solved .... and god knows I have asked a lot of questions and continue to ask for help .... 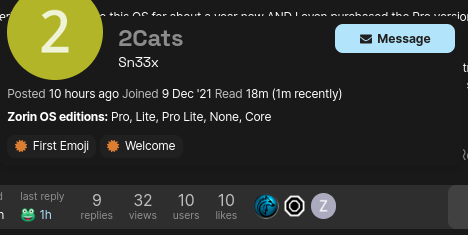 They've spent a whole 18 minutes on the forum since 9th December. Hardly exhausted all options to fix their issues.

Yeah...I looked at his/her stats as well. I am new here, but I know that after two weeks I had a bucket load of read posts and accrued hours. I have only been here 42 days and have but 24 hours of read time. Probably have more as I don't always login when I read.

Ya gotta "self serve" a little bit with any new software you are not familiar with. But...to fail on 5 laptops, not ask for help, and apparently did not spend much time here does not appear as much of an attempt at trying to resolve the issue.