With Aravasian's help I am now running XFCE in Zorin OS16 Core. I was looking for a more lightweight DE to help my 2009 iMac run things a little faster.

In Gnome DE I had managed to get DVD's and CD's to autostart in VLC by selecting VLC as the Default App for Music and Video discs. Gnome uses Nautilus as the File Manager.

In XFCE with Thunar, there are no options to select the default apps for music and video in Preferred applications. I tried to use Nautilus but it still does not show the option to set the Default Music or Video Player. I tried to set this up in Removable Media/Media tab but struggled to know which commands to run. Eventually I found some old ones from a 2014 thread on the internet and they work but only if I have Thunar file manager open at the same time. If there is no File Manager window open the discs do not Mount. 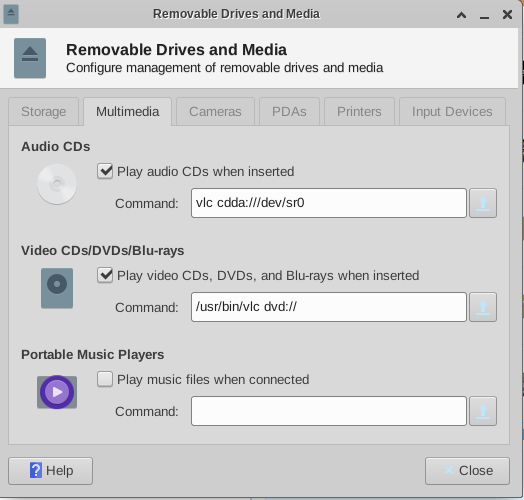 I know you can set a particular type of file to open with a particular application but I have been unable to find a way to do it with a DVD or CD apart from opening the File Manager first., which sort of defeats the aim of being able to pop a CD or DVD in and it just auto starts.
This is not a huge deal but I just wondered if anyone else had encountered the same issue and found a solution.

This is just a guess and I probably would be wrong, but won't making changes to the defaults.list files change the default application?

Thanks for the reply and it may well do. How would I find that list and alter it? Sorry, probably very basic I know but I am a bit new to Linux.

There are four of them. Two of them are empty. And other two contain some text I barely understand. If you wish to get their location, type locate defaults.lists in terminal. I have not tried editing those files, so do it at your own risk. I really couldn't understand it's contents, but if you are able to understand it, they can do it if you wish to.

This is where I got this idea from. In my laptop, the defaults.list does not exist in the location that is given in the website:

How to change the default program for a chosen file type system-wide in kde or xfce?

Thanks again for sharing but, like you, I think this is beyond me at the moment. Don't want to mess things up.

Got it finally!!! I have been working on this like an hour for just two commands. But it is worth it.

Long story short, use the command xdg-mime default x.desktop y and you should replace 'x' with the mime and 'y' with the file-type/file-format. You will most probably find the values for 'y' in the internet.

Have a good day.

Brilliant thanks for all your hard work.

Jeslin, you are on a roll. I really liked this one.

I'm also using vlc and watching those different movies for instance mkv, webm or avi, every time I had to make em work with the right application ( being vlc). I tried your suggestion and it just worked perfect.

Maybe jeslin could write a [HOW TO] Tutorial in the Tutorials forum.

I say YES, but it's up to Jeslin of course.

Okay then, I'll start working on it.