First time I have seen this .... getting Updates from Microsoft ..... yesterday I had about 10 of these but I unchecked everyone as I didn't want to update MS on Zorin .... but today they are all gone but these ....

Also on the same subject Software Updater .... I consistently get an update from FireFox about updating my English Language Pack when FF is not installed on my machine .... I deleted it ..... FF doesn't show up anywhere except on my Software Updater .... how to get rid of it .... I have been getting it daily for the past 2-3 weeks .... I've just been ignoring it ..... 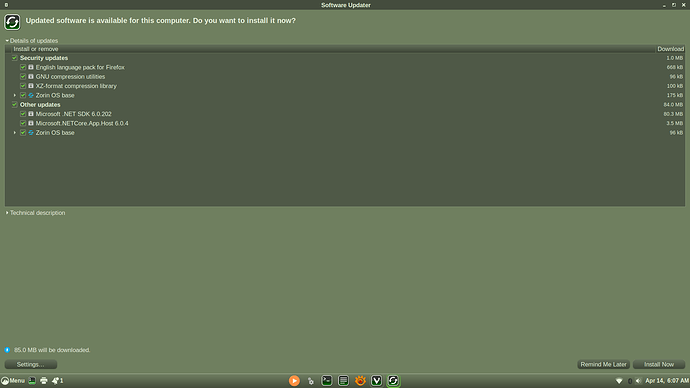 It looks like you have MS.NET installed on Zorin. I do too, as I required it for some other software on Linux.
Fun...
Either way, that is safe to update, if you want to.

The Firefox language packs are a known nuisance. Launch Synaptic, then use the search button to search for firefox-locale-en
If it shows as installed, select it for complete removal and then click apply.
You can also just search firefox and remove any other leftover language packs, etc. associated with FireFox.

Thank you sir the language pack is now history ..... not sure just what program I downloaded unless it was Wine to use for gaming .... or maybe a game I downloaded called Broken Sword: Directors Cut ..... the other 2 are both Pirate Adventures from Steam .... but those two can be emitted as I have been playing for a while now .....

I downloaded unless it was Wine to use for gaming

That is your answer in regards to the Microsoft updates.

Thanks DeanG .... I suspected as much as that is the only thing I downloaded in the past few days ....