Hi there!
After trying tons of articles and how-tos, I gave up on trying to set up my headset on ZorinOS 16.1 Core.

Does anyone also struggle with this?

The headset is working perfectly on Windows and smartphones.

When I plug it on my laptop, only the audio works. On Settings -> Sound, on Output Device, I can see the option "Headphones - Built-in Audio".

In the Input Device show "Internal Microphone - Built-in Audio" which is the laptop microphone.

In my /etc/modprobe.d/alsa-base.conf I've tried several options but now it's like that: 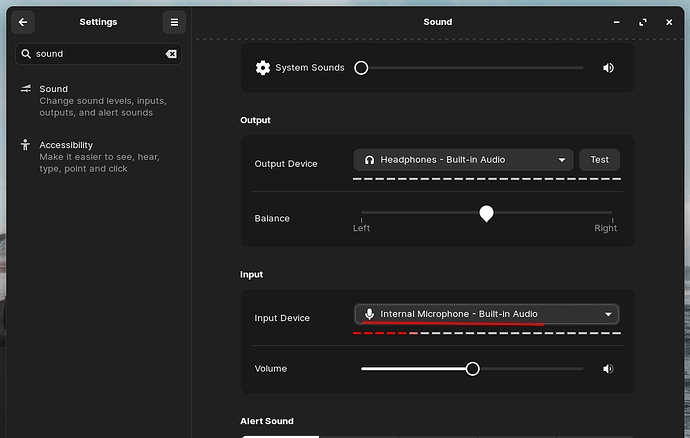 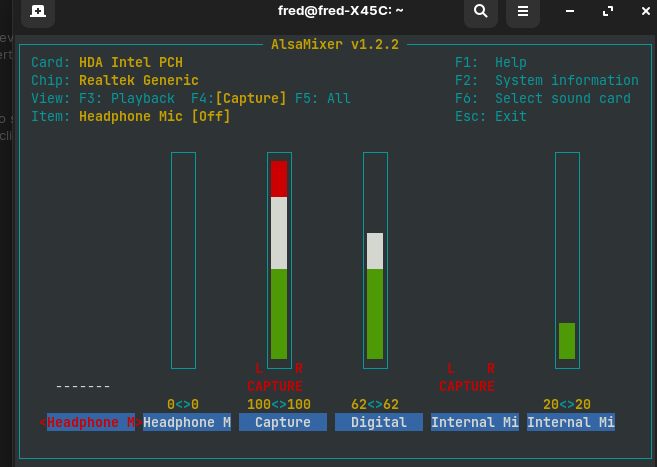 In this last image, you can see alsamixer shows on the top "Item Headphone Mic [Off]" and I don't know why. I don't know how to enable it too.

In AlsaMixer, when I press F4, it shows the "Capture" screen like this one bellow: 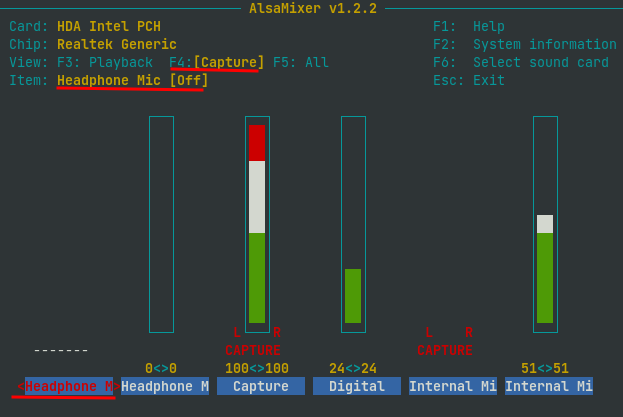 In this picture you can see that the first item is called "Headphone Mic" and it says its "Off", which means that I can set it's levels like the other items next to it.

In your alsamixer. Hit F5 to show All channels.

Some ideas to investigate, (but from experience, sound problems like this can be hit-and-miss to diagnose).

What happens if you increase level on [Headphone M], 2nd from left?

You may also want to play with the [Internel Mic] channel, 5th from left in your screeenshot.

Also.
Can you see a channel [Auto-Mute] ? is that Enabled, if so set it to Disabled. 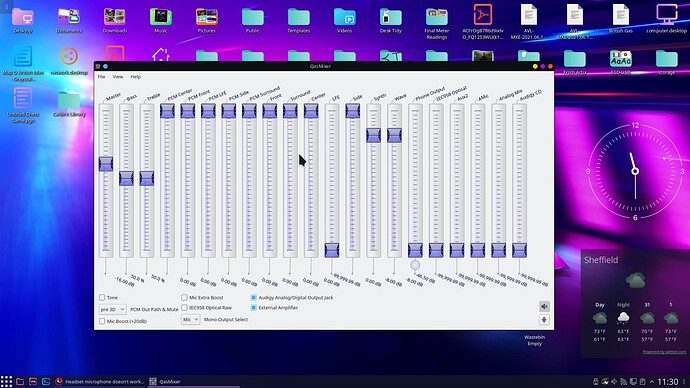 In Qasmixer, see if checking Mic Boost and Mic Extra Boost helps.
Having looked at an unpacking video of your headphones, have you tried turning on and off the mic with the switch on one of the cables?

When I hit F5, this is what it showed:

I tried Enable the Auto-mute but I didn't notice any change either. =/
I think the problem is the microphone present in the headphone wasn't detected... so no matter what I change in Alsamixer, it doesn't seen change anything

Hi swarfendor,
This is that qasmixer showed

image1136×538 123 KB
It doesn't show the "Headphone Mic" control too.
Whatever the problem is, its avoiding the system detect the Headset microphone.

Hi there!
I tried several tips from different articles and now it's working

That's it. Reboot the system

Now on the Settings-> Sound

To test it, try to blow or poke over the headset mic and see the "Sensibility bar" is detecting the noise.

It worked for me after a lot of hit-and-miss trials.

Thanks for all the patience and help!

Well done for persevering and resolving the issue yourself. Have marked your post as [SOLVED] in case users with same issue looking for resolution.

I put similar problem with front and back panel. Will trying tomorrow.