Hi all, I just installed Zorin Pro 16 the other day and I am trying to install the Nvidia drivers and used the additional drivers in settings, they do not install fully and it gives me an error message, when I restart the computer it boots past the Zorin screen and then I get a white screen that says " Oh no! Something has gone wrong." and stops there.
I reinstalled Zorin using the Nvidia option on install to install the drivers but when I went into settings the Nvidia drivers were not chosen so I clicked on then and then started the computer and the same thing happened again, the white screen.
Here is what I get when I boot the computer. I tried to use the Terminal on the live boot but I could not remove the Nvidia drivers.
Any ideas on how to either install the drivers or remove them if I can't boot into Zorin? Thanks.
I was able to get into the Grub by holding the shift key down while the machine was booting but I don't know what code to type in to remove the drivers or to delete them. Just an update. 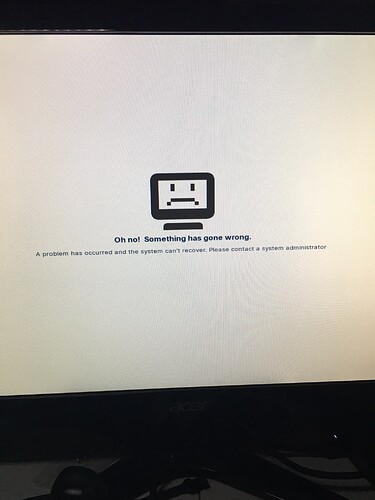 I finally got it fixed, I had to hold the shift key down on boot until the terminal came up where I typed in what I found on the net. Here is what I typed and after the computer started Zorin I went to addition drivers and installed them, this took care of my mouse and keyboard problem in Virtualbox also. This worked for me.