Installed latest Zorin Core, no problems, everything seemed smooth and this is the most beautiful Linux distro I have ever seen.

However, my cheap Asus USB-N10 Nano B1 wifi-adapter is not working. It has worked on multiple hardware and with Ubuntu, Pop! OS and Linux Mint out of the box. 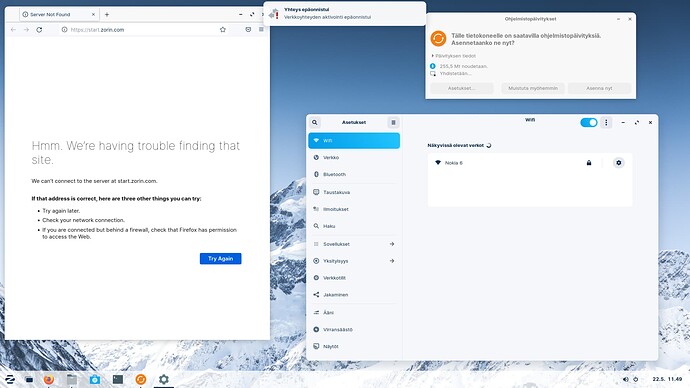 Now I see in the network settings that my Nokia 6 wifi hotspot is there, but no matter what I try it will not connect. I would have run inxi -Faz but it is not installed and I can't download it without internet connection. Here is what lshw show though:

Any way to fix this without network connection? Any idea what I should try next? If internet is needed, which I assume is a must, then I have to set up ethernet and it could take a day or two for me to get that connected via my other machine.

I managed to connect via ethernet, but would be nice to get wifi to work. Here is the output of my inxi -Faz

Naturally I updated everything via ethernet and rebooted and tried to turn the wifi off and on and plug it in and unplug... Any help would be appreciated.

Should be the RTL8188EUS driver...
It should work on the given kernel...
But you may try an older LTS kernel:

Boot into the kernel with esc or tab at the Motherboard splash, then the grub menu > Advanced Options for Zorin and test.
Or you may need a later kernel, even. The liquorix or TuxInvader kernel may work.
Otherwise, you can install the 8188EU kernel manually.

Thanks for that, I checked my Xubuntu and it's 5.15.0-30-generic kernel and the wireless device says it's driver r8188eu - everything works there and also on Mint and Pop! OS I never had any problem, the cheap Asus wifi dongle always worked straight out of the box.

Will try a different kernel, sounds too difficult for a newbie but what the heck, such a huge disappointment as Zorin seemed like such a polished product, everything else works like a charm.

Will try a different kernel, sounds too difficult for a newbie but what the hell...

No, not at at all. Especially if you go the Liqourix or the TuxInvador route. It is literally just as easy as installing Gimp or Popsicle or most any media player.
Since it will be a Higher Kernel version, rebooting will automatically boot into it.

I tried the git route and it says: "fatal: Too many arguments"

Will try a later kernel, sounds scary for a n00b, but here we go...

So I want a later kernel, 5.15 or higher, how exactly do I install it?

I tried the git route and it says: "fatal: Too many arguments"

My fault... I keep forgetting that the Discourse Forum Format changes posts... It is very annoying...

So I want a later kernel, 5.15 or higher, how exactly do I install it?

All things are scary when you have never done them, often they are easy once you have done it.
Windows OS has multiple kernels, too. They just do not tell you that it is a different kernel, because keeping the user ignorant is a method of control.
For example, using the Windows Tablet edition is a different kernel, since it has different driver requirements.
To install a later kernel on Zorin OS, I recommend the tuxinvader or the Liqourix kernel - which are very easy to install/

Thanks again. I like to go the easiest way, whatever happens in life. If one distro does not work for some reason, it is easier to just try another one. Been using these Debian based distros for decades, never ever had need to try different kernels. Like to keep things simple and stable.

Installing tuxinvader does not seem too hard, downloading 661MB of kernel now... for a wifi driver! I have very slow network, so will take a while. Then just reboot and the new kernel will be there just like that?

Then just reboot and the new kernel will be there just like that?

I would find trying another kernel to be a lot easier than trying a Whole Different Distro...

So thank you and the mods can mark this as solved, if that's the custom here.

Yes this was easier than installing a whole new distro. But for example years ago I tried to install Nvidia drivers and kernels on Fedora and that was such a pain that it was simply easier to turn back to Debian. Just my thing.

Feels good to have such an easy fix and everything is now in order. Awesome forum, got the help I needed very fast.

But for example years ago I tried to install Nvidia drivers and kernels on Fedora and that was such a pain that it was simply easier to turn back to Debian. Just my thing.

I think we have all experienced troublesome installations. On Windows, too.

Last time I had Windows installed on my personal computer was back in 2002. Been using Linux since then, for 20 years now. That does not make one an expert - I just used whatever works. Tried different things, but always turned back to Debian and now Ubuntu based distros. Simply awesome! Now I have Zorin on my test machine and if I still like it after a few months, it'll replace my Debian on my main machine. To each his own!