Well, today has been eventful already.

After doing some updates on my mom's pc this morning, the Software Updater informed us that she could upgrade from Ubuntu 20.04 to 22.04. --[Do bear in mind though that Zorin OS is technically based on Ubuntu from what I have researched/found out.]-- & that's what I did following the software prompts before her pc needed to be rebooted. Everything went smoothly, except during the boot process, she is now stuck with a black screen & nothing else so far!

[I have heard reports that some people tend to experience this sort of issue when upgrading their distro(s) to a newer version but I don't even know why or if it's like a bug or something...

] But anyway, she needs to have this matter resolved so she can get back to using her computer. There is a small problem though: since I don't daily drive Linux & I have to pull tech/maintenance duties around here, I'm not even sure how this sort of thing is supposed to be fixed or what the process is! Luckily, I'm a quick learner though!

For anyone wanting to know, she is still using her Dell Inspiron 3647 pc. If anyone here happens to need more details or have questions, feel free to ask away & I'll do my very best at replying per my knowledge/experience!

Hoping to get this matter resolved quickly so I can de-stress myself here. Thanks in advance to anyone here whom can help!

I suppose Zorin 16 is Ubuntu 20.04 and 22.04 will be officially available in Zorin version 17.
22.04 is in test phase for zorin with a lot of bugs.
You should get the original version of Zorin 16 and wait until the next update is available

If you still want to upgrade check out this post:-

Step-by-step screenshot tutorial to demonstrate how to upgrade to Ubuntu 22.04 from Ubuntu 21.10 and Ubuntu 20.04 Right Now.

@ghostminator Well, technically speaking, she already HAS Zorin OS 16, but like I stated earlier, the Software Updater informed us & asked if we wanted to upgrade. [Plus, I had no idea that 22.04 is currently in the test/beta phase.]

Still, what am I supposed to do as far as getting this matter fixed/resolved? Also, any idea how long it will be until some of these bugs are ironed out, probably a few weeks to maybe a month-ish?

If you could somehow reach the terminal there are some reverse codes. Or just try to get backup of the files and reinstall the OS

Or maybe it is Compatible with your PC, but the video drivers are missing!

Just done an update on my VM - no mention of Ubuntu 22.04. Wondering if someone has been messing with software sources as can't see how a standard install of Core could have done this - someone, somewhere has done something to break the install. i would use live medium that installed Zorin 16 to create backup of /home folder, including hidden files which start with a period (.mozilla as an example).
Screenshot of my 'about Zorin screen' after updating today: 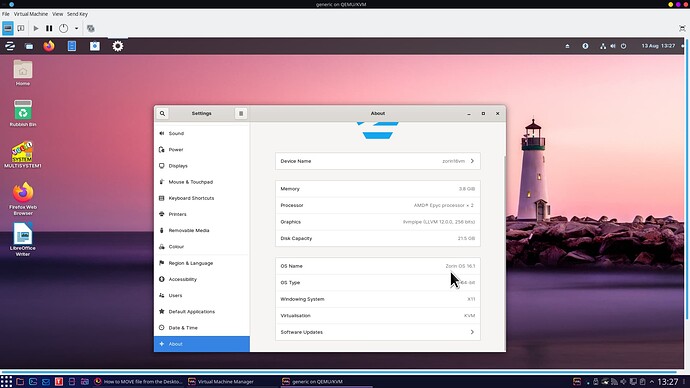