Todoist has no color in tray

I am running Todoist app on Zorin OS 16. I could find todoist in the tray but the icon is not visible (I mean it has no color, which should be red). See the screenshot (the icon in the center).

This would be the failure of the todoist developer. If there is a light theme icon, it may be in /usr/share/applications, but I'm not sure since i don't use that software. You could load a zorin theme you like, then choose the other tab and change the icon set, but it will depend on whether the theme developer knows about or uses todoist. You could also run a dark theme (which that icon seems to be made for) and that would solve your issue.

There may be a way to modify the icon color by css or other code, but it's something you will have to research. Not everyone uses that application.

I agree with 337harvey, then the most smart software have a smart tray icon auto-change to fit the system theme to make it well visible, or at least a tray icon menu where the user can choose his favorite. If the app doesn't have it and the developer doesn't add it (you can even request it) replacing manually the icon with the red one you want shouldn't do any damage.

I installed Todoist from the snapstore. I previously, for some other apps, changed the desktop icons (in the application menu), but how do I change the image of a tray icon?

Well, this is up to you, you should find the folder containing the tray icon and then you replace it with that one you like.

I found the icon. The image is infact red.

But I suppose it's the normal shortcut icon that you see anywhere (for example on Zorin menu or desktop). In this case, you need to find the TRAY one, that's white and littler, as you see it on the tray.

Yeah. I didn't find any other png in the snap directory. I think that, that tray icon should be in the same directory as snap apps are bundled and save all the data at one place.

Maybe the tray icon is hidden, try enabling Show hidden files and check the software folders to find it. Maybe it's even named trayicon.png.

I searched using the find command. I don't see any other icon.

This is strange, there must be the tray icon file somewhere…

I did a search and could find some, perhaps of a software (Discord in this case) that I uninstalled some days ago. 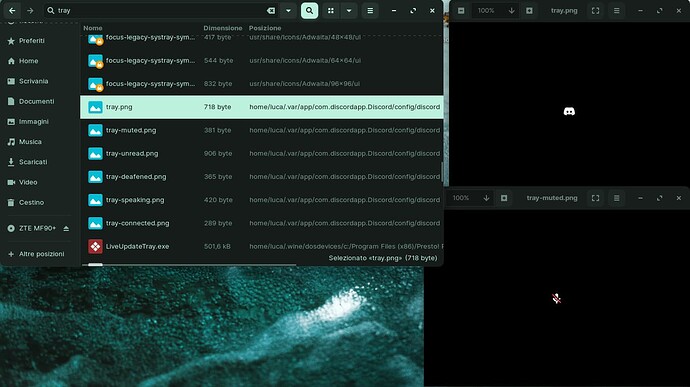 It may be an svg file instead of png. I've even seen some applications with ico and gif, rarely jpg. You should broaden your search to at least include svg.