I'm trying to boot my Windows 10 partition on my SSD while loaded on Zorin16. The two OSes are currently set to dual boot on the same internal SSD. I read it's possible with the three popular virtualization methods: Virtual Box, VM Ware, and QEMU/KVM.

Method 1:
I tried the first one with instruction from Virtual Box here under 9.7 Advanced Storage Configuration: 9.7.1.2. Access to Individual Physical Hard Disk Partitions.

I am trying to follow the instruction to generate a, "special image for raw partition support, which will contain a small amount of data, on a Linux host, using the commands:"

My Win10 partition is sda5.

However, whenever I try to execute the commands, I get this: 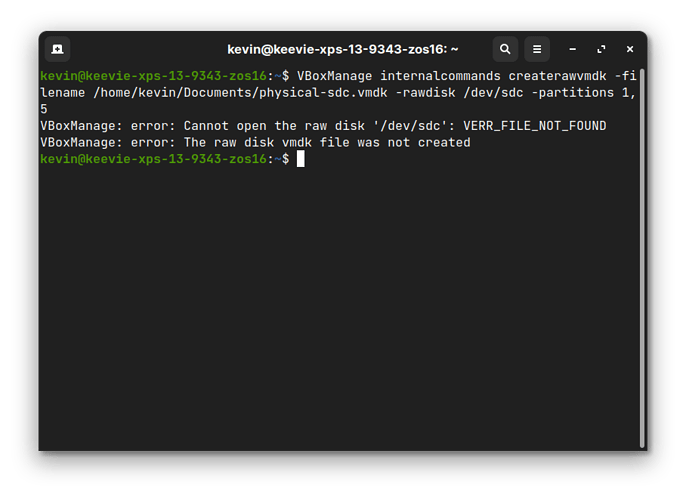 I got to the point of booting up superGrub ISO, but couldn't move past to boot up Windows. I'm also not sure I would want to superuser each time to load Win10 VM Guest too.

I followed instructions here, however, it's for booting Ubuntu as Guest VM.:

How to boot an Ubuntu VM from raw partition on physical disk in VMware |...

Introduction This tutorial assumes a dual boot installation on a physical drive. The instructions will guide you through the steps for creating a virtual machine using Windows 10 as the host and Ubuntu 18.04 as the guest. The process should be...

Method 3:
I read this person did it under QEMU/KVM, but it seems to be a fresh installation of Windows and Ubuntu. I need to keep my files in the Win10 partition. The instructions are a bit complicated for me too.
https://k3a.me/boot-windows-partition-virtually-kvm-uefi//KVM

Have anyone boot Windows partition as a Guest VM on Zorin or other GNU/Linux Host?
I wish to keep dual boot setup and have things done in Guest VM to save to the Win10 partition. This is in case something happens to my Zorin partition, I'll still have the ability to boot into Win10.

I considered and tried VM virtual disks the last days or so, but, it seems the system response is quite slow and I have trouble with getting SuperDisplay to work under the VM Guest as virtual disks.

There seems to be issues with the VirtualBox-Guest Additions virtual graphics OpenGL driver in working with DirectX. The 2nd display on Android complains about GPU driver issues on the Win10 VM Guest. Possibly because the drivers aren't signed. Maybe loading Win10 directly as a raw disk will help with the system responsiveness and SuperDisplay issue. I still have been unable to get Android Devices as 2nd Display Extended Desktop, not mirroring, to work natively on Zorin OS 16.

I know next to nothing about running VM's. Cause the last time I ran a VM, was Windows XP over Windows 7. But what I understand, is a VM is like a natural sandbox. Much like how a FLATPACK is correct?

Install the APP which can be found in the software store, called FLATSEAL 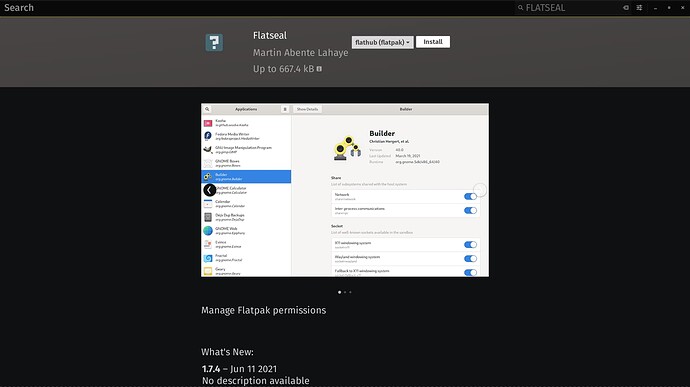 Using this APP, you can give permissions to rooted partitions. Learn how to use FLATSEAL in the video below. 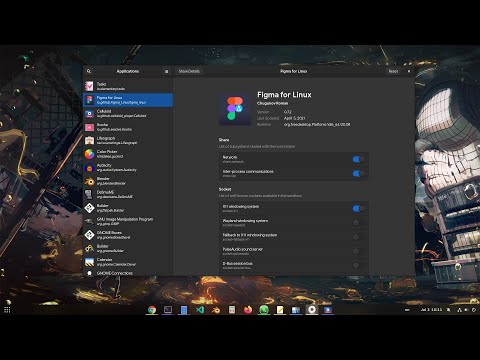 Method 1:
I was able to create the two *.vmdk files by sudo bash. But, I then had to change permission of the generated files back to normal user permissions to access them regularly.

I did it twice. Once with sda1 and sda5. Once without sda1, but just sda5.

It seems, in order to try to boot the generated files and access my other partitions, I'll need to always need to superuser to run Virtual Box. It doesn't seem safe. However, I tried it a few times, but the Guest VM turned on and I couldn't boot the Win10 Partition. Only the EFI Shell showed up.

I then finally got it to show a Windows Boot up error: 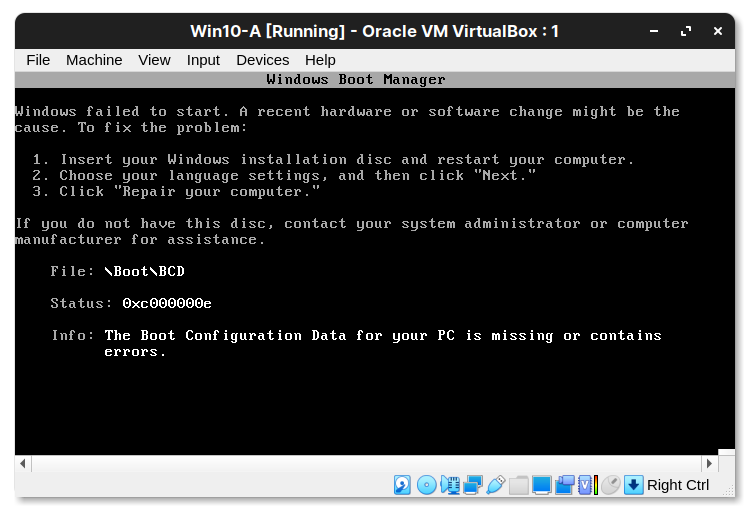 Without GRUB2 ISO to boot up first: 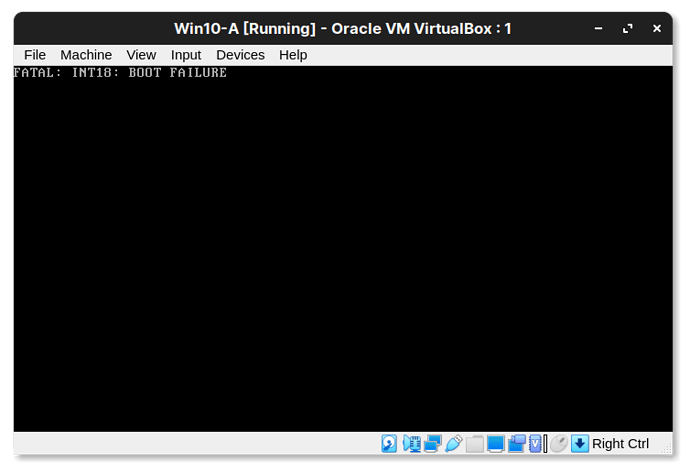 I think I'll stop trying this method for now since it doesn't seem safe on a production machine. However, I'll continue to welcome any suggestions, recommendations, tips, help, and other ideas!

But what I understand, is a VM is like a natural sandbox. Much like how a FLATPACK is correct?

VM is not just a sandbox in native environment. It's even more complicated and powerful. VM creates a "fake" or virtual bare metal "physical" computer within the Host operating system on top of hypervisors. Once in the VM, you're practically using it like a regular physical computer that's on your desk (to a certain extent), and the Guest OS and Host OS can be as similar or different as you want, as long as the Host computer's hardware and software supports it. You can even run a Guest VM OS within another Guest VM OS on the same Host. A box, within a box within another box. Inception-style.

@StarTreker
Method 1:
After some more trial and error, I got it working. I booted up my Win10 partition as Guest VM, with Zorin as VM Host.

Rebooting ended the disk access error when adding the files to the Guest VM, after ensuring user was added to disk group.

I remade a new pointer *.vmdk files with sda1, sda8, sda5: EFI, Zorin, and Win10. Then reenabled UEFI for system type and booted using the superGrub2.iso. Afterwards, it no longer even need the iso.

I also setup the Host and Guest in reverse. 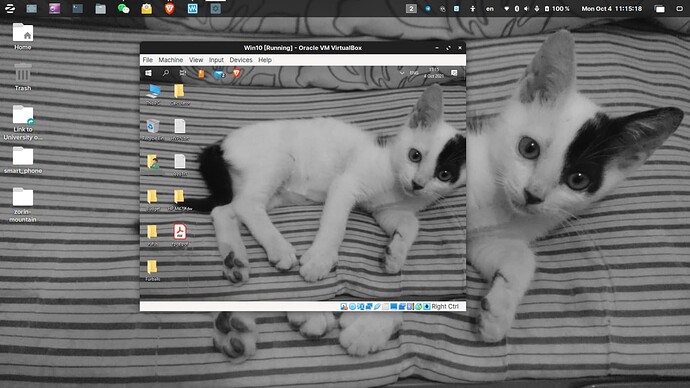 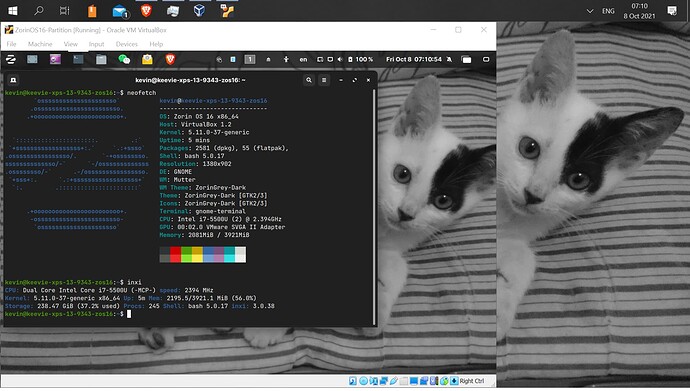 Thank goodness, success! Thank you for the update, I bet your pretty happy right about now. Time to drink a cup of coffee in one hand, and a glass of beer in the other. Talk about your multi-tasking performance.

Physically rebooted into Win10, shutdown then back into Zorin. Both work perfectly fine.

Although, I wish I have a higher speced system, so I can dedicate more resources to the VM, while maintaining enough for the Host, my Dell XPS 13-9343. The Guest VM on my m.2 SATA SSD is a lot faster than when I made an image of the Win10 partition and placed it on a USB3 External 2.5" SSD with speeds peaking around 80MB/s.

Dude, if you really like Dell, I can tell you what computer that Dell has that is most popular, has excellent SPECS, and will run the way you want it. Its the Dell XPS 15... 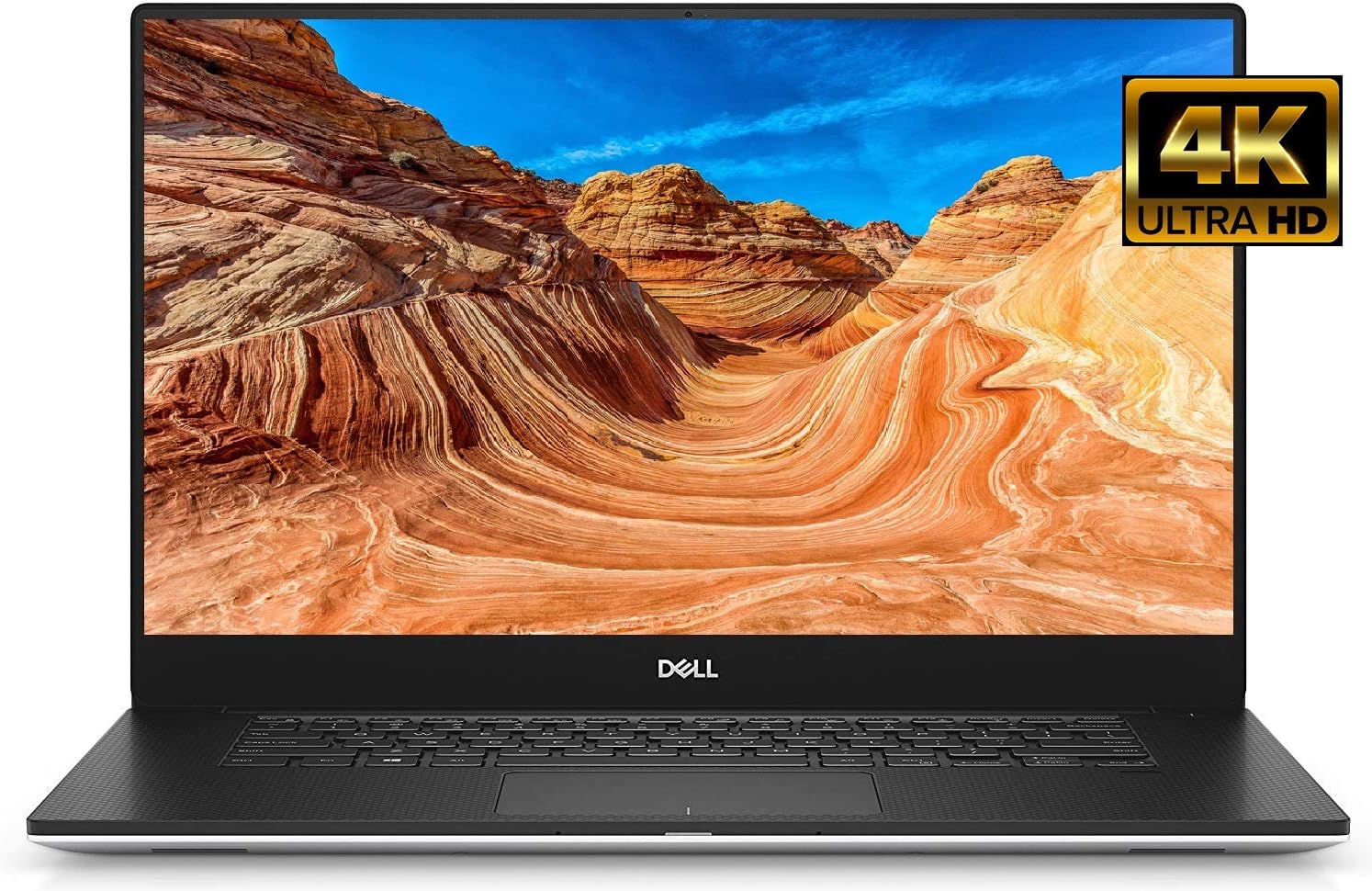 If you want performance, there's your performance right there. It will VM the sheeeeet out of the competition. I am sure for the price you can't beat it. Mine will beat it obviously, but mine is a 3000 machine so duhhh lol.

Anyways, just thought I'd share. You want performance, you got to step out of the 13" and step up to the 15" class, only way.

Over my budget for now. LOL.

But, I used to travel a lot for work, on planes and high speed rail, so I needed a portable laptop that could last for years. I don't like buying new tech stuff every year or two.

I always considered continuation of my XPS to a 15" or 17", if I ever buy a new laptop as primary choice. But, I'll look at others too. Best, if upgradability is an ease, since it'll stay at home most of the time. My current XPS 13 will remain my travel laptop.

But, I'll look at others too.

Good, you can look into this then, since you are essentially telling me your looking for a stationary computer, like a desktop. So that be this... 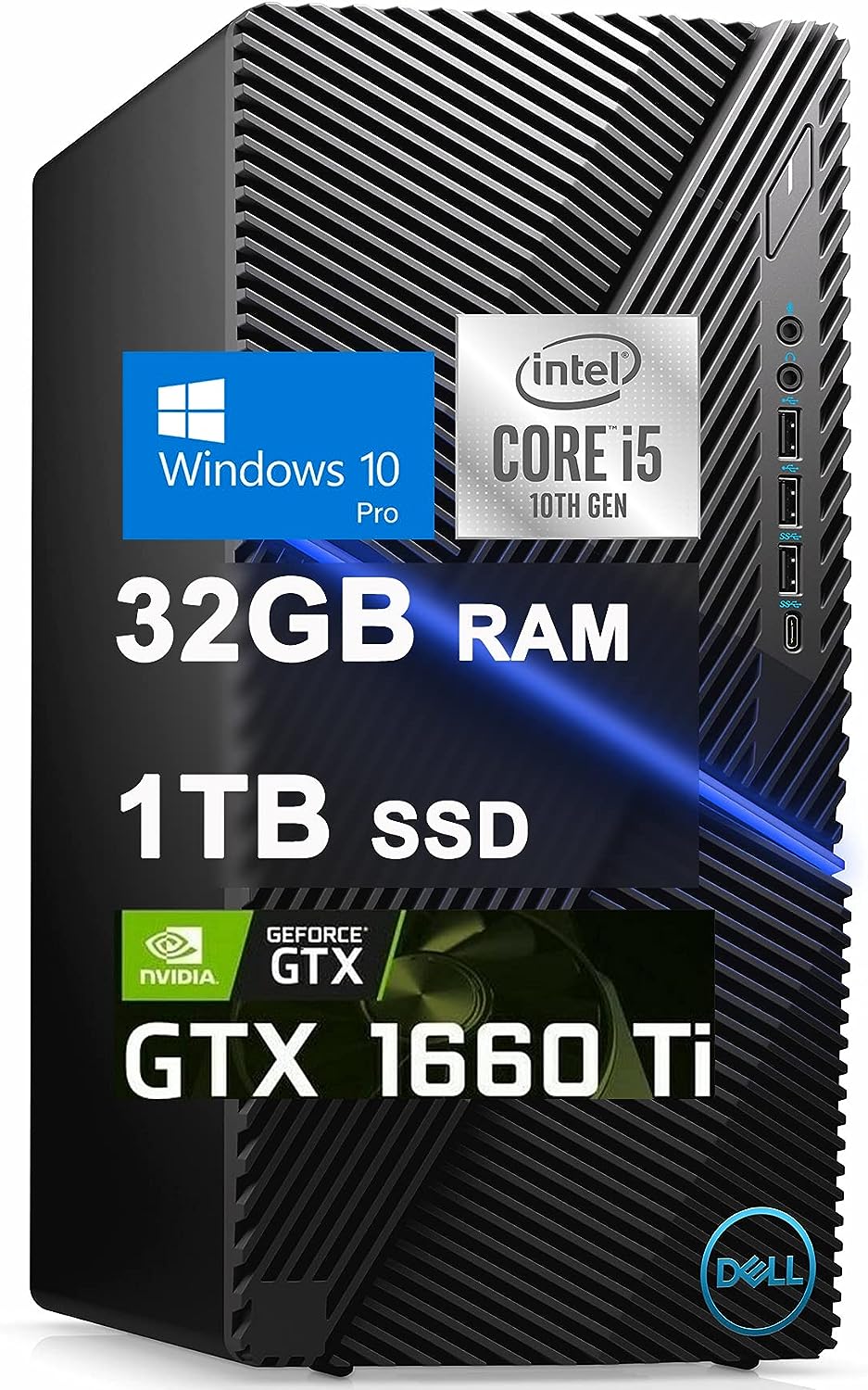 If you want more RAM, you can use the option configurator on there. But unless you are going to go super crazy with VM's, I don't think you need the 64GB RAM version.

I got no space for a tower and other peripherals. LOL.

Laptops are my choice.

Well, that means your gonna pay more, cause thats the nature of the game. And the notebooks that cost around 1500 or less, are usually always configured with 16GB of RAM, which is really not enough for what you are trying to do, and they come with like 5-generation old CPU's, which is also just not gonna cut it.

I will let you have fun searching away the interwebs. But, please don't let me out of your search for a new computer. I am very interested in stuff like this, so make sure you post your choices so I can have a look. Yes, computers are my life, what I can I say? lol