OMG! Could it have been any easier? For those that don't understand what that means, it means in the gui, go to your files, find that file, right click on it, go to permissions and check the box that says "make this executable" or there just might be a check box for executable depending on what you are running. Thanks so much for the response. I appreciate it.

side note: I am getting this error when I click on updates in the software updater.. actually it just pops up when I open it up. Can you tell me what it is? 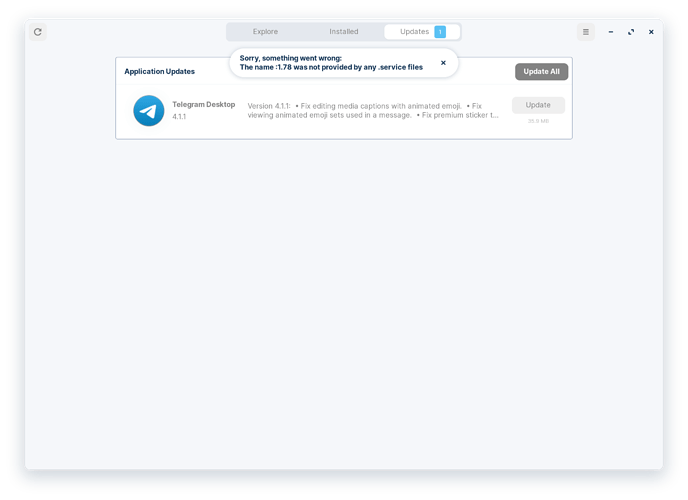 Thanks for the help! oh the update for Telegram has nothing to do with it I don't think as that update no matter how many times you click update just sits there and does nothing.

First of try Using Terminal for installation and removal of apps, it's a great tool

Second That error can get fixed by using

How to Fix Broken Packages in Ubuntu {4 Methods}

Thanks for the help! oh the update for Telegram has nothing to do with it I don't think as that update no matter how many times you click update just sits there and does nothing.

This issue is often caused by using a Flatpak or Snap version of the package. What is the source for Telegram?

the source is flathub. I really wish there was a room where people like me could go and ask to talk about all these things.. However, you open software and you write telegram and it comes up and if you have the sense to look at the website and see how long its been inactive, you consider other options, but no knowing the linux distro completely and therefore not installing things you might cause a problem with you happily install cause the OS> Zorin says hey this is here.. use this.. so you do and whatever happens, happens,. I am actually really happy with Zorin distro. I use it now completely. Yes, there are issues, but overall it is really really great. If Zorin does not want you loading things from other repositories and causing issues, then don't let us access other repositories unless they work.

I am good with that. I would rather a distro be so confident in what works that they only provide functioning software. I mean MailSpring, great idea, does not work with gmail. I mean if you are going to create a mail client, uh it better freaking work with gmail. Priority.

I really like this distro. I reverted back to thunderbird unified inbox for mail cause its the only damn things that works..

telegram is fine and working, but the error in the software is a , well you know

I am not even sure unless I go to command line if my Zorin OS is updated cause of the error in the software updates.

Creating your own distro is a HUGE HUGE commitment. I really wish I could help more then just writing about the problems. I am sorry for that..

I will speak rather plainly and bluntly for a moment.

Linux is different from Windows. And this difference is made up of a lot more than just whether you use this command in the cmd prompt on Windows or this other command in the terminal on Linux.

The community, the crowd, the sourcing - it's all quite different.
Entering Linux from Windows simply cannot be made easy. It can be made easier, which Zorin OS seeks to do. But it cannot be easy simply because it requires commitment to a lot of change.
In Windows, everything is standardized to One. One Windows OS. One Desktop Environment. One registry. Differences in software development and opinions are internalized.
On Linux, you have many different desktop environments and a slew of available independently contributed software. If Windows is the internet, then Linux is the Deep Web.
But this is also daunting. It's a lot to learn and a lot to take in.

For Zorin OS
The ZorinGroup opted to use the Gnome-Software package since the OS seeks to provide a familiar layout, function and design. Gnome-Software most closely resembles the Windows Store. It is easy to use and non-verbose.
It is also buggy, glitchy, too non-verbose, can really mess up a system, inconsistent and looking at the code will convince you that it was developed by a kindergartner with Kruger-Dunning syndrome oozing out of his ears.

Other than testing user complaints, I never ever open Gnome-Software for my own personal use. This error you are experiencing is common and a perusal of threads on this forum should yield you a large number of users requesting help with it. There are some things on Linux that just plain grind your gears. They are no good.
https://forum.zorin.com/search?q=not%20provided%20by%20any%20service%20files

And it persists, year after year. Because Gnome-Application developers cannot not only develop a reliable application, they cannot fix them, either.

You can purge the configuration files, if any, from ~/.config/gnome-software directory.
Then, reinstall Software your certificates and Software Store:

See if it is working. It probably will, until it doesn't again.

For many of us, however, we abandon Gnomes Software store in favor of Synaptic Package Manager.

Synaptic is powerful, versatile and easy to use.
It is not as pretty as Gnome Software, but it does not make a mess of things, is powerful enough to install and remove the Linux Kernel, can flawlessly manage all updates and is verbose - It tells you if something goes wrong, what went wrong and what to do about it. It warns you before removing essential packages, as well, unlike Gnome-Software.

Thank you for being blunt. Some times it works better. I am learning from the extensive and very welcome responses with information that I can refer too and ultimately understand. So thanks for taking the time to write everything yous did.

I am going to post a new error I am seeing and I am just curious if this is something I did or if this is normal if something is down or unavailable. 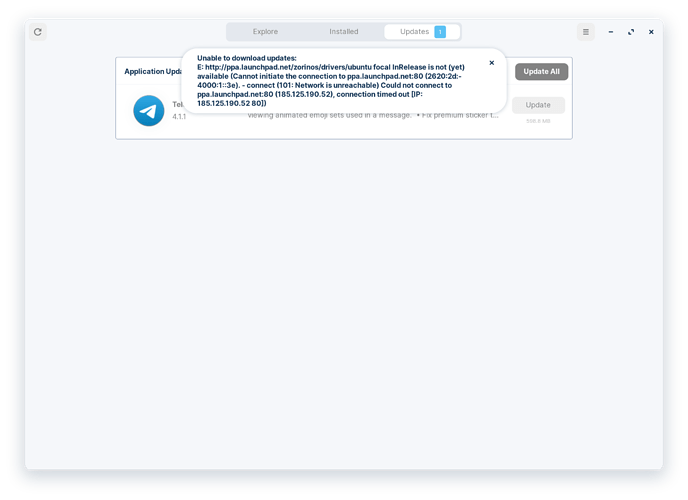 Thanks for any and all information. I appreciate it. This might be from me not starting PCloud manually. Once I started PCloud the error has gone away.

You know what the hardest thing about linux is. " NOT CLICKING THE X " Damn It I can't tell you how many times I have closed my email.

This might be from me not starting PCloud manually. Once I started PCloud the error has gone away.

This... is interesting. Are you using a VPN?

You know what the hardest thing about linux is. " NOT CLICKING THE X " Damn It I can't tell you how many times I have closed my email.

I wonder if different Window Borders may help you to solve or work around this problem.

actually I am not using a vpn any more.. I remember awhile back having the ability in linux, might have been mint. Where you could tell the OS to randomly change your mac address and hide your IP. I was thinking of looking for an app that does that but then I figured, ehh it's not like anyone is going to be hacking into my linux laptop. However, since we are on the topic. Is there an app that most people use for a vpn in linux. If this was windows I could ramble off the best top 5 but finding stuff to use for linux, well I have no idea. I would prefer suggested items rather then me trying out 60 different things myself.

In regards, to the border and the X. I was basically trying to make a joke. In windows when you have an app you can close the app with the X and it still remains in the taskbar near that clock. Then when you want to use it again you can easily just click it in the taskbar by the clock and open it..

Linux, seems like so much more work. 1. You usually can't find an app that stays in the toolbar when you X out of it. Unless it is still working in the background. Is this the case? 2. When you want to reopen it you click on the taskbar icon near the clock and instead of it opening it asks you to open it. Like duh, if I am clicking on you to open why ask? Usually in windows if you want options on the icon you right click on it.

I am unsure why if you go through the trouble of making a desktop that resembles windows why you would change those little items that well most people have been doing for decades. I kinda understand that clicking the X should mean. CLOSE.. duh right.. It's a learning curve. It's just hard not to shake your head when you click the X to close mail and you have in your head the idea it's still running and you come back later to only realize "damn" I closed it.. lol

You may want to try the down arrow on the title bar, which is minimize. Hitting close and it staying in the taskbar is provided by certain developers for certain software, usually with services that update the program in the background (stacer, zoom, slack, etc.). Minimize will do what you want with all software (be careful though, to many things open will show down your system).

There shouldn't be an option to open things you double click, unless you reversed the main and secondary buttons on the mouse in settings. How it's installed will have a an effect on this also. Snaps and flatpak responds differently to usual use than .deb (one of the reasons i don't use them). Finding an alternative install method can be difficult though.

Evolution works great on Zorin. I use it regularly. It can be a pain at times having to login to the email account if i don't open it again for a time, but worth enduring when facing alternatives that are not nearly as user friendly (i didn't care for thunderbird).

Most of what you experience is fixable and worth the time. Gnome software isn't as good as it claims and worth avoiding. That's another reason i choose to use the terminal to manage applications, using synaptic if i really need a gui version to deal with something. Stacer also allows you to manage installed software without having to be confused by gnome software's updates available because snap or flatpak is at a higher version than the .deb version (library and snap security updates). I don't understand the reasoning for doubling the libraries on your system so that a software can have access to it without having to poll the system files (which are already in memory?!). This also increases the size of the software package installed (discord snap: 1.2gb, discord .deb: 254mb... why? Libraries and security with snap functionality).

You usually can't find an app that stays in the toolbar when you X out of it.

Yes. In Linux, Close actually means Close.
I... am a different animal. I think if I closed an app and it remained in the taskbar, that would bother me.

When you want to reopen it you click on the taskbar icon near the clock and instead of it opening it asks you to open it. Like duh, if I am clicking on you to open why ask? Usually in windows if you want options on the icon you right click on it.

These are Gnome affectations. Or... removals.
On my desktop, right clicking gives the configuration or settings for the item clicked on.
And you are not pestered about reopening. Open means Open. Not ask if I meant it.
...And applications do not open Minimized. They just open.
As it should be.