Updates, select one, get many

Using the software store updater, why does choosing one package to update select others and install them automatically?

I chose to update Asunder, and all the org.freedesktopPlatform.GL.nvidia updated.

I'd really like to not keep updating Nvidia. Every time I do, the sound on my system breaks. I have to uninstall and reinstall the proprietary drivers to fix it.

You can Uncheck the Repository in the Software Update App. If you Really like Using GUI

I'd really like to not keep updating Nvidia. Every time I do, the sound on my system breaks. I have to uninstall and reinstall the proprietary drivers to fix it.

You can apt-mark hold packages that you prefer to not update.
For example, let's say that you wish to hold back GIMP:

This may help you. Some software requires the other software to be updated, listing it as a dependency.

How do I determine which repository contains Nvidia drivers?
I unchecked the Proprietary drivers for devices (restricted) Downloadable from Internet setting in Zorin Software, didn't seem to do it.
In the Other software area, I have the following: 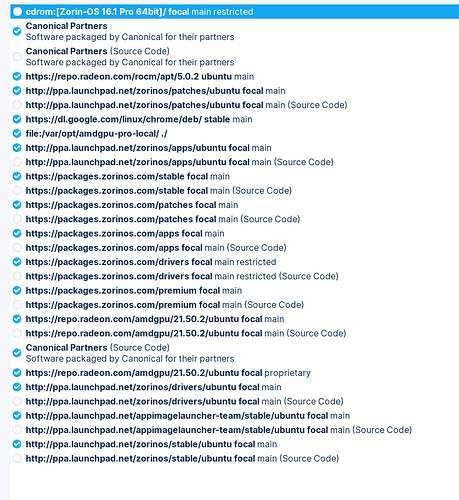 I'd imagine I could unselect the radeon repos since that card has long been retired? Anything else that should go?

How do I determine which repository contains Nvidia drivers?

The drivers are found in the main universe repository, which you do not want to disable.
The Radeon repos should be safe to use if you are not using any AMD graphics.

So these can safely be marked as not checked?

Which is the main "Universe" repo that that I don't want to disable ( which if I understand it, contains the Nvida drivers that I do want to stop updating). So am I left with the suggestion to

And do I need to do this for every Nvidia package that wants to update seemingly every week?

Marcsitkin, I am sorry. I completely forgot your goal. I was in a hurry and addressed the post as asked, forgetting how it related to the original question.

To hold the Nvidia driver from updating, first check which driver you are using. For example, let's say you are on the 515 driver: