Updating from 15 Ultimate to 16 Pro bought

I have Ultimate 15 and just bought and downloaded 16 Pro.

My box is shown in the attach image.

What version should I install ? 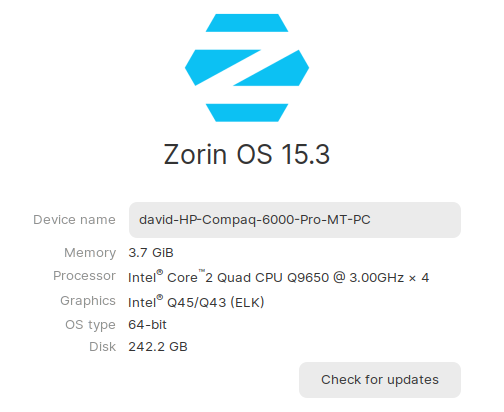 BTW I also have a dual boot with Win 10 Pro.

Nice processor speed. The RAM is a bit low... I would opt for Zorin OS Pro Lite on that rig.

As the previous person said, good processor! But with only 4GB of RAM, I would absolutely go for the lite version of Zorin OS, especially if upgrading the RAM is impractical or impossible (i.e. it's already maxxed out).

I hope I'm not missing too much from the full blown version.

I hope I'm not missing too much from the full blown version.

ZorinGroup did an excellent job of adapting and modifying Gnome to make it usable and functional on Zorin OS Core.
While XFCE is a fully functional and complete desktop. Like KDE PLasma, XFCE comes with everything you need for a working desktop. Gnome desktop is not and does not come with all the parts on its own. Gnome is a stripped and heavily simplified desktop.
To this end, independent developers contribute Gnome-Extensions that can add functionality or even restore functionality to the Gnome D.E.

Gnome tends to be more resource heavy than XFCE. XFCE limits resource usage to when the operator (you or me) calls on applications or functions, rather than having them running in the background as Gnome does.
While this makes XFCE ideal for lower spec computers, do not let this make you think that XFCE is inferior or only for Low Specs. My own machine is high end, but I prefer Zorin OS Lite. It is fast, customizable, lighter footprint and easy to use.