Using the terminal emulator in Linux distos comments and issues

I think the biggest reason people fear the terminal is the theoretically infinite number of possible commands. In a GUI, the user will eventually find all the buttons and can eventually figure out which does what. But in a terminal, it is impossible to find all the possible commands (help command just confuses the user even more). That's why terminals are horrifying to new users. As a person who still doesn't like to use Terminal and will avoid it unless necessary, I have a great suggestion to improve it. Having a smart auto-complete system in the terminal that contextually helps the user figure out which commands are recommended/applicable. I don't know if there is an addon that could add this feature but if such thing does exist, that would turn the terminal into a thing that new users can actually operate, rather than needing to lookup on the internet for every command. If such thing exists, it would be neat to write a guide on how to add it to the system or even better, implement it in Zorin itself.

Having a smart auto-complete system in the terminal that contextually helps the user figure out which commands are recommended/applicable.

I have seen that sort of thing before, but it is a poor compromise between GUI (multiple choice exam questions) and CLI (write an essay). It was not popular. Users still wanted the confines of a GUI with dropdowns and buttons.
Some use the Command Line Interface for almost all system interaction, wheras I find with Zorin that I am only using it for specific housekeeping tasks. However, I only have a fairly simple set of apps and do not change things around that much.

Summa summarum getting people de-afraid of the terminal. 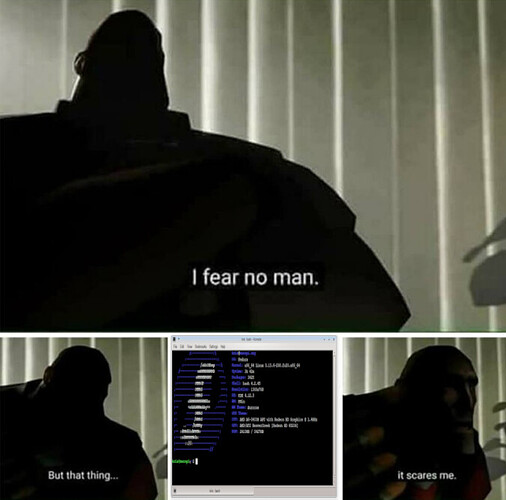 Developers should be paid for their work...

That is true, but that discussion is a whole different can of worms

That is true but a CLI is much more unintuitive than a GUI. Without this tutorial that you just posted above, I wouldn't have been able to operate this tool on my own. But if it was a GUI app, I definitely would've been able to figure the application out on my own.
I like having access to the CLI and being able to use it but I absolutely hate the idea of having it as the only option. It is outdated and borderline obsolete.

While I see your standpoint, I disagree with the idea that CLI goes far beyond what most GUI apps can offer. While that statement is objectively true in a lot of cases... I don't see it as something good. To me, it says that the design of that GUI is SO bad that people rather use the CLI. It Sounds like an insult to me

Sadly the GUI design of MANY apps and even platforms are still totally outdated, obsolete, and as you mentioned, limiting.
It's a weird problem that I noticed instead of getting tackled and is often fought against. Instead of users uniting and pushing for a new and better GUI for everyone's benefit, people just want to stick the old and unintuitive CLI and sadly many Linux veterans declare it as the holy answer to everything.

No, not at all.
What it is is that I firmly believe that users of the operating system should be Taught how to use something that is new and unfamiliar, rather than avoiding that process. I could make the statement that it is insulting to avoid teaching, as that may something about assumptions made as to the users capability.

It is outdated and borderline obsolete.

Much of what is used on all computers, from MS to Linux to Mac is over 60 years old.
GUI + functions have been around for nearly 40 years.
Many hardware components have seen massive progress in design, allowing for far more data to be packed into smaller spaces. In spite of this, we still use the ancient language of binary. And cooling fans have been around for 70 years.
Often, things are used long term because they work.

It's a weird problem that I noticed instead of getting tackled and is often fought against. Instead of users uniting and pushing for a new and better GUI for everyone's benefit, people just want to stick the old and unintuitive CLI and sadly many Linux veterans declare it as the holy answer to everything.

I switched from Windows to Linux about two years ago. I had never used Linux before that. And in the beginning, I hated the terminal. I do not qualify as a Linux Veteran.
As I struggled to set aside my biases and learned how to use the terminal effectively, I began to realize the great benefits of it. For example, as a person that does graphical images and design, I can convert images from .png to .svg with One Single command in terminal producing an instant result. In a GUI app, the app must use a larger amount of resources and I must navigate the buttons it requires be set - it is less efficient, takes longer and can be more confusing. This is true in image batch converting too.
I began to prefer the terminal for its elegant simplicity, amazing efficiency and almost universal access to all tooling.
Where I started out hating the terminal because I did not know what to do; I now love the terminal as the most diverse and useful tool in my computing toolbox. There is nothing else anywhere near as empowering.
The trouble with a "New GUI" is in how one could be effectively designed that performs as the terminal does. I mean consider- How many menus, buttons and checkboxes would that mass of complexity have? You would need dozens of tabs at the top each populated with hundreds of options.
Have you ever used Blender? It is much less powerful a tool by comparison and yet is so loaded with GUI options, it can take a very long time to learn the basics on it and months to years to master.
G.I.M.P. is far simpler than Blender and I have been using it for about a year and a half and I still have not opened its fullest potential and learned all of its abilities.
A desktop GUI that replaces the versatility of the terminal would be an absolute nightmare - and this is the reason one does not exist.

I think this analogy limps because of its implications. I could alter the analogy to compare the Terminal to a Main Corridor of your home that allows fast and easy access to all rooms as needed. It need not be perceived as Dark and Dirty. It can have marble floors and be brightly lit.

I pretty much agree with every thing you said. My wording in the previous post suggested that I am hating on the CLI but my intentions were the opposite. I want to pedal new and good GUI systems because the current ones are mostly horrible. It is mostly me hating the current GUI designs and trends rather than the CLI.
On a related note, yesterday I was trying out VIM and I was hoping I could use that as my main text editor and even IDE. I was hoping it could possibly change my stance towards GUIs and CLIs but Oh my lord.... what an interface

To say it was unintuitive is an understatement.
I really liked the cool shortcuts to do specific things and I liked the idea behind it but I grew frustrated with it as I realized how much time it requires for me to set it up and learn all of its shortcuts. But then I installed Kate and Kdevelop and I was immediately able to figure out what's what. I wonder if there are some VIM users here and what do they think of it. I'm really shocked by the VIM users as I've seen them prefer it to programs like Atom, VSCode, etc... Even by hobbyists and casual users.

p.s. I think we should move the posts above to another thread as they deviate from the original topic.

VIM kills me, too.
Nano, which is the default in Zorin OS, suits my terminal editor needs. But generally, I use GUI text editors a lot. I prefer Xed. Pluma and Mousepad are good, too. There is Geany as VS Code for more in depth work.
In general, for Linux, I believe in the user using what they prefer and what suits their needs the best. And over time, these preferences can change quite a lot. An example; Installation. For some it is Software Store, Others Synaptic and some, like me, primarily terminal. There are other options available, too.
While user preferences apply, I also believe that the terminal is the most essential utility on Linux; Like a culture or a monument or a movement of progress - It must be Preserved. As I can be opinionated as anyone, sometimes, it is more of a passion.
Users may apply their preferences and use their resources at will. Yet, also be encouraged to learn this powerful utility, practice it and respect it - so that they have the control and the ability when they need it. It bothers me a great deal when users wish to exclude the terminal, shun it, rather than learn it, even if it is not the first preference.
Much like a car, you may have many preferences of the car and use it your own way with your own style, but you still must learn how to drive it.

p.s. I think we should move the posts above to another thread as they deviate from the original topic.

I was wondering this as well...
Note: Posts moved from Post 10 above to this post into this thread.

I want to pedal new and good GUI systems because the current ones are mostly horrible. It is mostly me hating the current GUI designs and trends rather than the CLI.

I think this topic is worth exploring in depth, as well.