Ventoy took my OS, can't figure out how to load Timeshift snapshot, and now my disk's full despite reinstalling Zorin

Background information: so, I had Ventoy installed on Zorin. Don't know how it happened, but when I took it off, for whatever reason the OS disappeared. I snapshoted with Timeshift, but it's not allowing me to load the backup through live, so I decided to just completely start anew.

To the new problem: I reinstalled Zorin. I chose to completely wipe everything off the PC. When I loaded into the OS, though, apparently I still have data from my last install? It's telling me it's full.

Guys, I'm so frustrated with this. I don't know how to even address the problems; I thought reinstalling a fresh OS would be the best fix because it's only needing to reconfigure stuff, but how can I even do that if there's 0 room to even work around? Until I can figure out what the problem is, I'll have to just stick with my old PC for now.

Fire up Gparted (if not installed, install it) and send us a picture of it. It will show us how the disk set up is. It should see the partition wit the backup on it which takes up space. 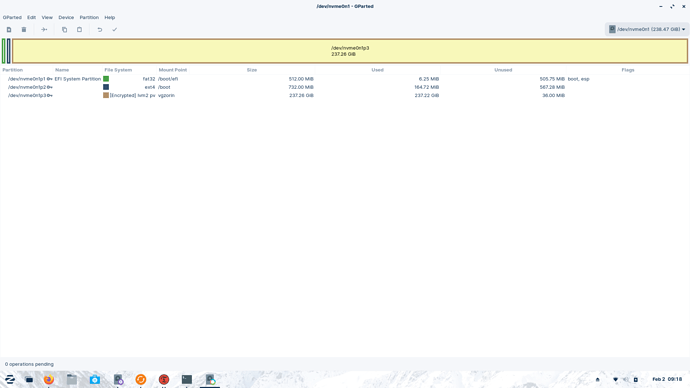 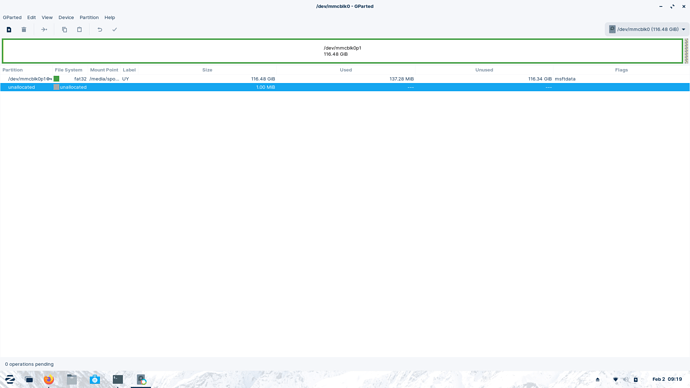 You encrypted your first installation, not the most recent one?

The recent one should also be encrypted? I typed the encrypted password in an hour ago.

If you encrypted your first install, then that is locked- which would explain why your drive is filled. The new installation needed to write around the existing encrypted files.

Makes sense. I'm still confused on how I even managed to write around it like that. So, would that mean I still have my data from my last install? Because it said I was missing the OS after I accidentally messed with Ventoy. How could I go about accessing the encrypted install again?

So, would that mean I still have my data from my last install?

Because it said I was missing the OS after I accidentally messed with Ventoy.

It is far more likely that it was missing some Boot Information, not the entire OS.

If this was me... I would thoroughly wipe the drive, then perform a fresh installation on the freshly formatted drive:
https://itectec.com/ubuntu/ubuntu-how-to-format-an-encrypted-hard-drive-in-ubuntu/

On the LVM Encryption:
This can be useful if you are a secret agent or work for Coca-Cola... But other than that, it is far more security than most people need and more trouble than it is worth.
There are also other methods of also securing sensitive data on your machine without encrypting your entire drive.

How could I go about accessing the encrypted install again?

Ah... I sympathize, but would consider it a loss if at all possible. Even if you have the password, it would not be so easy to access an LVM Encryption without the properly loading OS.
If you do not have the password, you would need a supercomputer at your disposal.
This is part of why I point out the above - that total disk encryption is more trouble than it is worth.

That's a shame, but it's only a minor annoyance. Everything of importance is stored on both my old PC & a 4tb external hard drive, so all I'm really needing to do is reinstall & customize settings. I'm glad I took photos of said apps & settings on my phone; it'll make things easier to set back up.

I was actually debating doing a fresh reset, too, so it's not all bad! I'll be sure to remove the LVM encryption, as well, since, as you and @Storm have stated, it's far more trouble than it's worth. Appreciate the help so much! I've got a much better understanding of the situation, and my head's cleared.

I have... utterly destroyed my installations of Zorin many times over the years. Not because of Zorin OS, but because of my experiments and exploration.

I have also managed to lose a lot of personal data due to my failure to properly make back ups before rushing headlong into the abyss...
Such... are how we learn our lessons sometimes.

There are several tutorials on the forum for how to back up repositories and applications as well as configurations, enabling a much easier time of reinstalling Zorin OS. It may be worth perusing that sub-forum.
These partly exist... due to my own dozen and a half necessary re-installations when I loosed a heavy canon in a china shop.

Not sure if I'm the only person, but I actually like going in and manually setting everything up. I think it's because I have a habit of just restarting something rather than stick to trial and error; if I feel that I've made a lot of mistakes, then I lose the desire of continuing it. I've certainly learned to ignore that itch, but it's still present.

I've lingered around the tutorials section on forum, but I'll dive in again to find other guides.

Not sure if I'm the only person, but I actually like going in and manually setting everything up.

Umm... no... you are not the only one... I could not reinstall so many times if I didn't and I confess... I have reinstalled Zorin OS Solely and Only for the purpose of a fresh clean start, too.

[HOW TO] Easily reinstall programs when Reinstalling Zorin Tutorials & Guides

Sometimes, bad things happen even to good people. Maybe it was a power outage or some spilled coffee... But whatever it was, you now must wipe and reinstall Zorin OS. What makes this particularly daunting is all your software you have installed must now be reinstalled. (EDIT: I am removing the script option as some report they work and some report they do not work. Y-PPA-Manager is a lot easier and works every time.) You can use Y PPA Manager GUI tool to back up your current repositories. Ru…