What is the near future of xfce?

xfce is very good , it's lite, it's more customize, but there r still bugs in it, like window button plugin in xfce panel(small icon, no pin ,etc), docklike plugin tried to solve that , but it's not match all icon of all apps.
xfce-panel has bugs like twice wifi icon, twice redshift,etc and u may get bug like when u click on super key , u get appmenu, in the same time change language, etc, to repair all of that u must restart panel.
restart panel may fail, the new orage calender haven't enabled yet. and may i forget somethings.
thunar is need to be more better like nemo.

This is not a bug, it is the devs design... I dislike this design, as well.
It can be changed by recompiling the source code on xfce4-panel. It is a bit of work.
You can get large icons by removing the text, but then the button is the Icon only and that too, annoys me.

You can solve this by using DockbarX which comes with Zorin OS lite and Pro Lite. Dockbarx allows pinning apps on the panel. In fact, Zorin OS Lite comes with the file manager and browser already pinned.
Your Icon theme determines the icons. Likely, you see a difference when an app developer writes into their code whether the icon referenced is the Icon or the Symbolic Icon.
This too, can be changed by

Yes, these are annoying.

thunar is need to be more better like nemo.

I also use Nemo as my preferred file manager on XFCE.

Why care for Future when you can enjoy it Everyday

It can be changed by recompiling the source code on xfce4-panel. It is a bit of work.

You can solve this by using DockbarX which comes with Zorin OS lite and Pro Lite.

i think that is old zorin, but that is screenshot for panel items from live zorin lite16 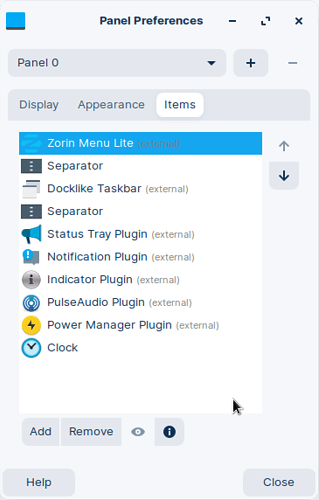 image366×572 34.4 KB
that is the layout one, for the layout two it is using window button instead 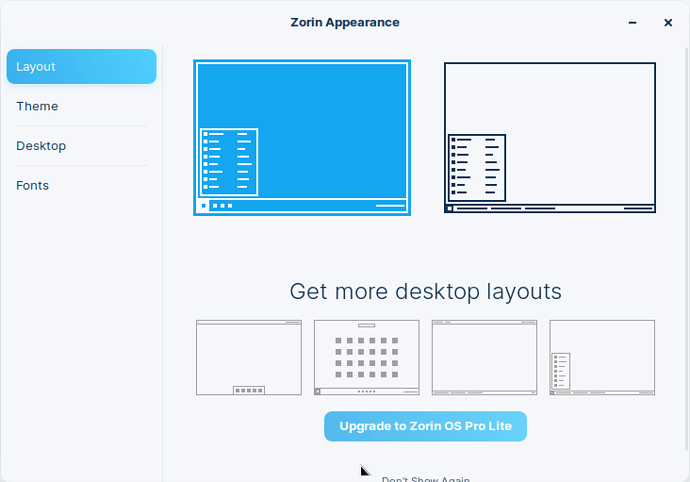 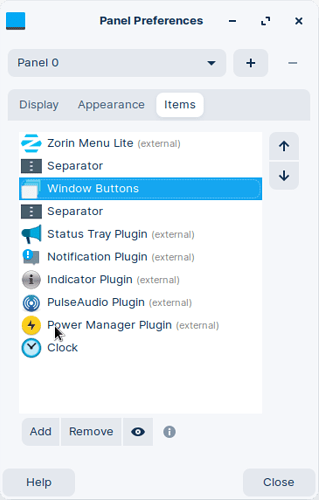 The repository I linked to is the Current Zorin OS repository.
However, I checked and it also does include the xfce4-docklike-plugin, as well.
I wonder if the layout preferences determine whether docklike or dockbarx is used?

for the two free layouts, dockbarx is not included, i don't know may be it is included in the other pro desktop layouts. when i wanted to try using dockbarx, i downloaded it, but the main and default layout for zorin lite is using docklike

I can only stand corrected, or wonder if this is a very recent change...

the default layout is using docklike, that is zorin lite 16, do u mean recent changing in 16.1? i don't know? i don't know anything also about zorin core, i haven't tried it

My Zorin OS is current and up to date... However, I never use the Dockbarx (Or docklike) Plugins. So it is entirely within reason to think it changed and I did not notice it.

Either way, this nips the suggestion made above.

most of the new user for zorin lite , get the default one which it is using docklike not window button, docklike is very good , u can pin , u can get big icon, it use very low ram, but it is not match a lot of apps, u can try it when u open panel preferences and create launcher app, u will get gear icon a lot in it, dockbarx is using very high ram

most of the new user for zorin lite , get the default one which it is using docklike not window button, docklike is very good , u can pin , u can get big icon, it use very low ram, but it is not match a lot of apps, u can try it when u open panel preferences and create launcher app, u will get gear icon a lot in it, dockbarx is using very high ram

I have never used it. So, give me some time to test it out and try out some icon sets. Perhaps there is something we can do...

@eid
So far, my preliminary testing has shown no symbolic icons mixed with regular in docklike.
This may be due to the custom size I am using (32px) or just chance on which apps I pinned.
Could you please post screenshots of the icons you noted showing the disparity? It may help more easily narrow down the cause. 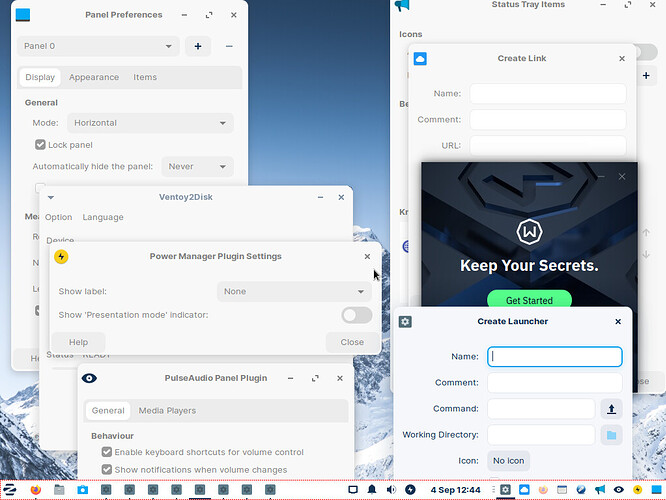 image1024×768 162 KB
this is the live zorin lite 16, i have added docklike and window button in the same time to the panel to show difference, as shown, docklike use different method to match app(i think it is depend on .desktop file), i don't know the method that window button use it to match icon.
docklike can't match ventoy, windscribe vpn,4kvediodownloader apps,
docklike can't match create launcher, authentication window, all external plug-ins in xfce.
i have solved(4kvediodownloader,create launcher,panel window,authentication window by refer to icon path to /usr/share/icons/hicolor/scalable/apps. and make copy of .desktop of app at /usr/share/applications. and worked good, i tried that method with ventoy and windscribe and external xfce plugins but it doesn't work
Aravisian 4 September 2022 16:36 #16

Application developers and the System tend to squabble over icons and appearance settings.
Some application developers intensely dislike that on Linux, users can use a custom icon. They feel that the icon is their Brand image and as it is their identity, should not be changed.
To facilitate the icon not changing, they include the icon in their applications directory and code the app to reference that directory, instead of the users icons directory.
Others place the icon in /opt during install.

This behavior is a huge frustration to those of us that make icon sets and release them for others. It is controlling, short-sighted and disruptive. But unless users are willing to band together and boycott apps that behave this way, they will not correct their behavior.
When I create Icon sets, I have managed to create many of these missing icons, symlink or redirect to them. But there are many that I can do nothing about - and must include a warning about what to do about missing icons in the README file included with my sets. I include a large number of icons in my sets that won't appear unless the user replaces the files contained by those specific apps. But by including them, the user can replace them if they wish, attaining a uniform look.
Sadly, Docklike and Zorin Developers have their hands tied by this as much as everyone else.
It is a decision made by specific application developers that take control and leave you with this disparity because they want control over your desktop.
This is further compounded by the use of Snap and Flatpak which also handle themes and icons differently.

The system will insert either a Generic Application Icon from your mimetypes directory (As shown in your screenshots) or the "missing-icon" image from the Status directory, if the icon for an application cannot be found.

I am not sure what is going on with the external plugins - let me explore that.
But your correction for the other apps (I use 4k, as well) was the right way to fix that.