What makes Ubuntu a beginner's distro and why do people move on?

feels like ubuntu has a lot of depth if you go looking. why do people feel the need to move on from a 'beginner's' type distro to something like arch? genuinely curious, all thoughts welcome!

It's a tough question considering many on this forum have stuck with Zorin OS.

My own reason was wanting to expand and learn more. More configuration meant more learning.
What I learned along the way was that though Zorin OS comes with Beginner friendliness, everything you may want or need on Gentoo or Arch is as much a part of Zorin... Which meant that there was no need to try to "move on" to another distro and... Zorin OS worked better for me, for all of the configurations I did not want to mess with, than Arch did.
My own bit.

As aravisian has stated, this can be a difficult and possibly loaded question. Some try other distros for speed or further control. Others for more customizations. These are available in Zorin, but some feel that it's to simple or it may not accept what they are attempting. This also allows for users to try the latest kernels and firmware in rolling distros.

I have been in elementary OS, POP, puppy and Ubuntu. I have found Zorin to be the best quality. It is stable, though behind the new kernels because the focus is on reliability and stability​. That means the latest hardware may not yet be supported. That means that the latest kernel features aren't yet implemented. But that also means that the distro works, in just about every situation, though there may be some adjusting and nudging to get it that way.

I have installed several desktop environments, run gtk and qt applications (with KDE) and enjoy the customability as well a the speed Zorin offers. Others may be lighter in weight, but most can't touch the performance without heavy configuration.

You drive a fiat, see a Ferrari and buy Toyota to get close to it. Everyone wants something they can't have... possibly can't handle. Either way is a learning process and limited only to your knowledge and what you are willing to do.

Personally it was the default "look and feel" of Ubuntu that I didn't quite like. I tried similar distributions like Mint and Manjaro and they all worked fine they just didn't quite looked they way I wanted to, and as I'm terrible at graphic design and customizign all this type of stuff, I eventually got stuck with Zorin because of the look and feel.

It's not like I judge a book by it's cover, I've used many distributions without barely noticing these details, but it's really nice to have the best of both worlds. And what do you know, turns out ZorinOS has everything I need out of the box.

And I think the key is that last part: out of the box experience.

"why do people feel the need to move on from a 'beginner's' type distro?"

This I can't answer - but I can tell you why I don't feel the need to move on from a 'beginner's' type distro: Zorin feels just right... Despite 30+ years of Windows I felt right at home almost immediately when I installed 16 Pro last week. The Linux filesystem has fried my head somewhat, but that may be because I was brought up on C:> and had dismissed the recently-released Windows 3.1 as just a fad (I have been known to be wrong before!), and besides, it's the same terminal as other Linux flavours anyway. Prior to this I'd tried Mint a few times - going back to Windows 10 in between - then a newer PC with Windows 11 and now to OS 16. I don't run any 'heavy duty' software so just a little tweaking of the built-in settings and I have a nice minimalistic desktop that does everything I need without getting in the way. An OS should be like a good waiter (or lover) - unobtrusively in the background yet always ready when needed

That's why I don't feel a need to move on. I now have a fast and stable system that looks good, is easy to maintain and has intuitive point & click usability. The power of the terminal is always there should I want to learn its commands, which I probably will - just for fun! What's not to like? 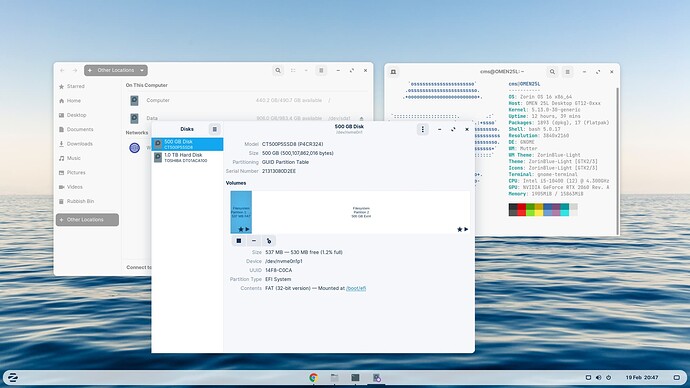 Similar boat to you.
I use Zorin for work because it's simple and reliable. I have yet to hit a wall with ZorinOS. I don't have time to faff about, I just need stuff to work

I have been a windows user for along time but i have always been interested in linux distros. With Zorin OS Pro its easier to use compare to older distros i tried. My gf have an older slow computer with win10 so i asked her if i could try a linux distro on it. I think i google linux distro easy to use for a beginner and i found Zorin OS.

I installed the free version on it and i really liked it. Now she can use it and its easy to navigate using Zorin startmenu. Now i have installed it on my own laptop and its almost working as i want. Its easy to install, add a wifi, install programs etc.