When an innocent installation kills your system

I have been exploring different x11 tools for creating Mouse Pointer themes. One of them stated that I need to install xcursorgen.
I typed sudo apt install xcursorgen in terminal and it stated that package has no installation candidate, but x11-apps and x11aps-i386 replaces it.
Now… When users install Wine, they need to install for both 686 and 386. So, it seemed reasonable to install both here…
x11-apps said it is already installed. But when I entered to install the i386, this is what came up in terminal: 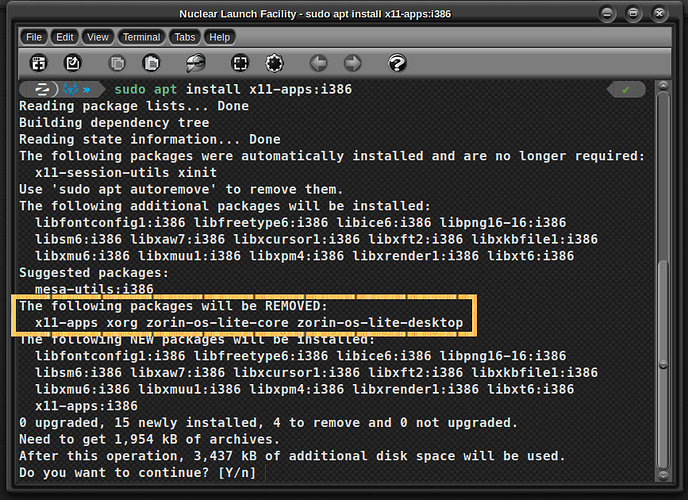 removal867×630 174 KB
See what it wanted to do there? That looks like it would sting a little bit.
If I hit the “y” button then, it would have wiped out my desktop environment, the graphical drivers xorg, x11-apps, xinit AND the x11 session utilities. And once that was done, I would have been at a loss as to what was probably removed… Wipe and reload. That may have happened in an alternate universe, but not in this one. I hit “n” and closed that puppy out.

Good tutorial here apart from the failure to allude to ‘alien’ to create .deb packages from .rpm ones. Also failure to mention on the checks to run on 3rd party tarballs. One element I did not include in the manual, using Apt (an ncurses command line tool but very powerful):

10 common mistakes to avoid when you're installing Linux software

Installing software in Linux is nothing like it used to be, but there are still some pitfalls to watch out for. Jack Wallen explains how to sidestep some of the typical installation problems he's encountered.

I also think that major Linux distributions are trying in their own way to be the M$ or Apple of the GNU/Linux world. What is happening is that major distributions are effectively becoming ‘closed’ open source and remember, ‘Open Source’ is not FS (Free Software as in Free of encumbrances not Free of Charge)! (as alluded to in ‘The Lounge’ - great post there Aravisian!). This undermines the whole ethos of FS which is to do what you want with it and make it your own and feedback the changes to the originator acknowledging the original contributor to the software; not be told effectively that your machine is no longer your own - “You do it our way or you can’t run our system on your machine”. Thankfully Devuan and BSD make it possible to have software ‘your way’.