Which Nvidia driver should I choose?

This is the first time I am trying Zorin. Pretty freaking awesome so far. However, I am unfamiliar with the recovery system. Most important video. I am reluctant to try a nvidia driver only because when I tested zorin and chose to use nvidia, the screen went black and the only option I had was to reboot. Which worked. Since then I am a little concerned about choosing it since I have now installed it and a reboot won't fix the problem.

So based on the screenshot below maybe someone can steer me in the right direction.. Right now the machine is working well with the built in drivers. Just curious if using the nvidia driver might make it a bit smoother for games. 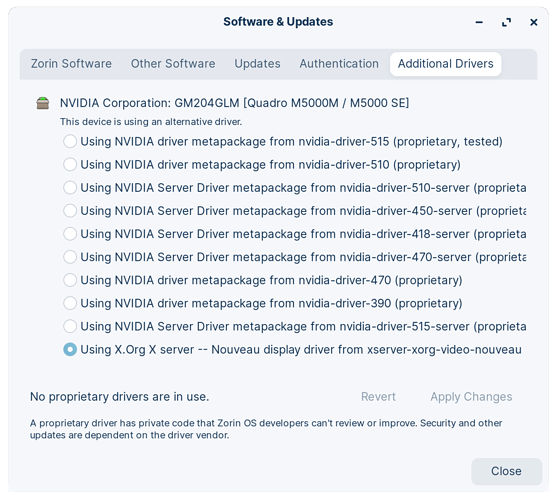 If you are having no issues with the Nouveau open source Nvidia driver, then there is no reason to change it. The Nouveau driver is the Linux Nvidia Driver and is open source non-proprietary. You should experience the same Nvidia driver performance.

Some users do experience a difference, due to changes in Proprietary code in Nvidia. For this reason, they may have more luck using the latest 510 or 515 Proprietary Tested Driver.

If you would like to try out the 515 proprietary tested driver to see if it is smoother on some games, I recommend fearlessness.
Click that puppy and then reboot into the Nvidia 515 and see what happens.
If it fails, tap the esc or the tab key at the motherboard splash screen on rebooting to pull up the Grub menu (if you do not see it normally).
Navigate to Advanced Options for Zorin
In that menu, select Recovery
In the Recovery menu, arrow key down to drop to Prompt
Hit enter
then run

Arrow key down to this line GRUB_CMDLINE_LINUX_DEFAULT="quiet splash" and add the nomodeset paramater to prevent the Nvidia Drivers from initializing prior to essential system files (causing a crash). It will look like: GRUB_CMDLINE_LINUX_DEFAULT="quiet splash nomodeset" with one space between splash and within the quote marks.
Tap ctrl+x to exit, then confirm the y key to say yes to save, then the enter key to save and close.
Now you must run

for the changes to take effect.
Back out of the menu and proceed to test a normal boot.
So, you are not lost in the dark if something does go wrong.

Wow.. thanks so much for all that information. I really appreciate it and understand it. This is a really huge help. Thanks!

they may have more luck using the latest 510 or 515 Proprietary Tested Driver.

I'm a bit confused here in the past I believe you were saying to not use the (NVIDIA Proprietary Tested Drivers) as folks were having so much trouble and just use the NVIDIA Proprietary drivers ..... has something changed that I am unaware of

It would be really helpful if they specified for nvidia card, 900 series, 800 series, 1080 series, even the M5000 which of the 470, 510, 530 or whatever there is should be used. This would make picking one from the options a little less scary. I am sure everyone would benefit from knowing hey " if you have these cards use this number". Just a thought.. and thanks again for the information.

It would be really helpful if they specified for nvidia card, 900 series, 800 series, 1080 series, even the M5000 which of the 470, 510, 530 or whatever there is should be used. This would make picking one from the options a little less scary. I am sure everyone would benefit from knowing hey " if you have these cards use this number". Just a thought.. and thanks again for the information.

In terminal, you can swiftly run

This will automatically install and enable the Nvidia Driver recommended for your card.
Most Nvidia cards will work just fine on the latest driver, though. It is far less scary than you may think.

Picking the driver is not the hard part. It's fixing the problem when my linux skills are newbish. Now that I have the forums sending me emails with the prior posts I have a document that shows me what to do in the event I get a black screen. I will move that over to my tablet so I can follow the directions to the T. I will give it a go. It's just I spent like 5 hours perfecting this machine and I would hate to have it get trashed just because I want to see if the other drivers does better. Also, I have to assume that when I tested Zorin before installation that it should have chosed the best nvidia driver for my system then and that's when it black screened, so I am feeling a bit cautious. However, unless I try and fail and then fix I will never learn what I should.

Yes and I am using the 515 Proprietary Tested myself...

what actually is the difference ??????

For gamers nVidia proprietary might be a necessity.
Personally I prefer to use Noveau drivers as I have had bad experience of graphical performance and even turning off hardware acceleration in browser made no difference.
I also don't like proprietary blobs as they can potentially be a security issue.

Things might have changed but do you really trust closed source?

life is a risk, which we try to mitigate
i feel it is sad to suggest the nouveau driver is equal to the nvidia driver
poster wouldn't have asked if he wanted to use the neouvaus driver

There are so many options in the list. I can only really speculate.

What is 'server'?
idc

What is 470? etc
probably for cards that are not supported in the newer drivers. You can go to nvidia site to see which driver is recommended for your card, then download and install or use the selector given in the Software Sources window.

The answer: sudo apt update && sudo ubuntu-drivers install
is good, and I'll be doing this next (currently on Noview driver)

My only real concern is possible bugs from the newest driver, but I'm going with what the above command gives.

if you can't trust nvidia.... well, i think we have larger concerns

Upon reboot it did not go to desktop, so i ran: sudo apt remove nvidia*
and rebooted
back in bz
addl drivers shows NewVo again
trying 515, not server (because 'why'), but there are two options, same except for one word: open
so, i guess that one, shrug; because FOSS ;#)

Which Nvidia card are you using?

hmm, it does not select the nvidia 3050, laptop

Do you have nomodeset in grub?

For RTX 3050, you may do better with the Liqourix kernel, and using the Xswat Driver updates.

I would start with the xswat updates, then only install the Liqourix kernel if you absolutely need it.

Advertisement Liqourix Kernel is a free, open-source general-purpose Linux Kernel alternative to the stock kernel with Ubuntu 20.04 LTS Focal Fossa. It features custom settings and new features and is built to provide a responsive ... Read More 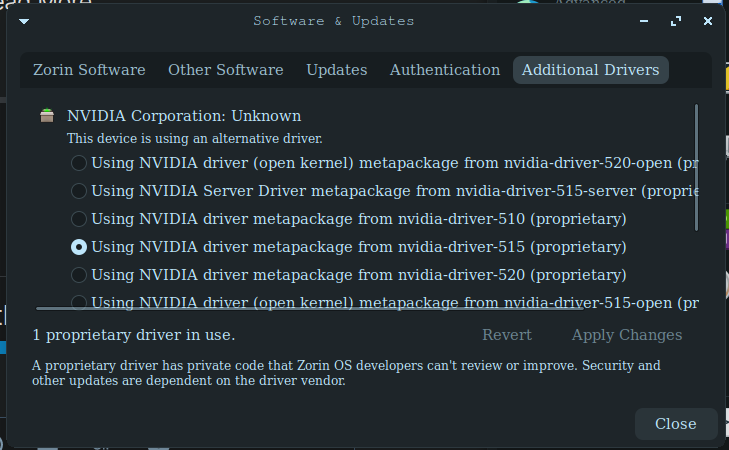 the ubuntu driver auto install ( sudo ubuntu-drivers install ) did the 520 for me, which did not work, so i tried the 515 open, also no good, then the 515 regular (not server), which worked. Repeat till success, or last ditch try a download from nvidia, same thing, new first, according to what nvidia gives you, then older versions if necessary.

The Software & Updater window that installs the additional drivers should work as it is doing the same thing as downloading from nvidia, basically. Possibly doing a build from source yourself (according to nvidia instructions) MIGHT give your system something the regular method does not.

thanks, i'm glad it worked with the 515 non-open
i'm going with the ubuntu-studio low latency kernel from ubuntustudio-installer