Why Zorin is not providing proper updates?

Say me a noob, beginner whatever, just tell me why are you not providing updates to built-in apps like firefox the latest version is 95.0.2, and from your software store (even after selecting Zorin os repo) I have 95.0.1 it's ok I can still install firefox latest from Mozilla website but now tell me what's the problem with you I have seen a new software store on youtube someone was using vanilla gnome so that store looked too good so why don't Zorin devs also update to it?

I just want updates nothing more!

i have been tired seeing this

Do I need to change repo to get latest gnome software?

here also repo mistake or anything else?

One more thing to note: now don't come and tell me use firefox from flatpak no I won't I need the original one.

Ok so now I am asking tell me another that provide regular updates to software as well as security patches.

and If it's hard for zorin team to provide upadates then they should clear this thing.

When applications are tested on Zorin, each of them are a certain version. Basically, a snapshot in time. The repositories are simply telling you what version of an application is known to be stable on Zorin. Doesn’t mean that other versions won’t run - just means that it isn’t possible for each update on each application to be tested for stability.

As you wrote in your OP, you’re free to try any version you like.

How can i install latest gnome software? tell me!

Ur best bet is to install another distro because I don't think Zorin Team have any plans to move to Gnome 40 or a newer version.

I don't recommending adding any reppo because it might mess up ur system because Zorin is using an older version of Gnome.

U can try distro's which are using the latest Gnome version like Fedora. To my knowledge Fedora uses the latest version and uses the default adwaita theme with no extensions installed.

In my opinion I would like to see ZorinOS use the latest version of Gnome. I heard that the Software Centre is much improve in terms of visuals and performance.

Fedora uses latest gnome and no it does not support .deb packages.

As for firefox, you can download the latest build from the mozilla site. I downloaded that one and i am always on the latest version.

Fedora is not based on Ubuntu which is based on Debian. Debian uses apt. So Fedora uses a different package manager called dnf and supports .rpm repository. So basically, not all distributions use the same package manager, and they all offer up and downs. This is usually the main difference between distros.

I think Fedora always uses the latest version of software in their repos. If Arch didn't exist, I think I might run Fedora as my main.

As for firefox, you can download the latest build from the mozilla site. I downloaded that one and i am always on the latest version.

how you managed to install that? it's portable version I think

You can place the folder anywhere yes and create a shortcut.

I run the nightly version from extracted tar.bz file which updates automatically. I used the main menu application to create a the shortcut and and add an Icon. Using sync is no problem either. 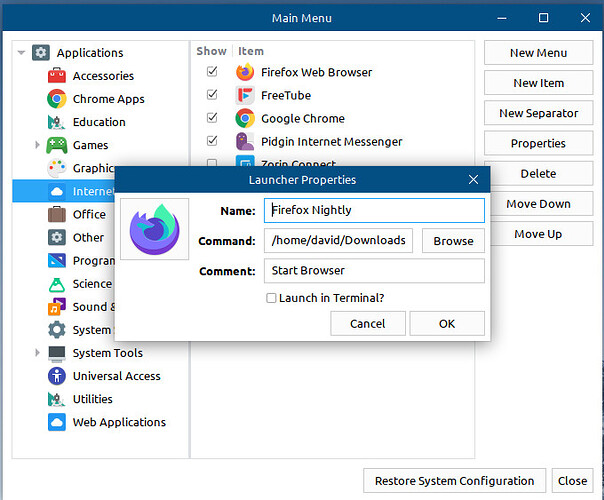 I am telling, they don't update to latest, because they are based on Long term support version.

In software store search firefox, and select the flatpak version, it's the latest.

But if you want everything to be latest, I would suggest separating the /home partition and moving to ubuntu 21.10

Latest version is not always the best version, also why should he/she swap to ubuntu 21.10 ?

I already said he can get the latest firefox by just downloading it from the mozilla site. I also would not switch just because a package is a bit outdated. Firefox has nothing to do with being on longterm support or not.

If he wants the latest of the latest he should use a arch based distro by the way.

Say me a noob, beginner whatever, just tell me why are you not providing updates to built-in apps like firefox the latest version is 95.0.2, and from your software store

Well because it isn't actually Zorin who is providing the store, so therefore they're not the ones responsible for updating the apps in the store.

If you look at your Firefox that was installed by default it was from Ubuntu (canonical) and they are the ones who update it. If you want the latest and greatest and are willing to live with any problems, then install it direct from Firefox. You're free to do so, but you need to accept the consequences of installing software just willy nilly onto your system. This is no different in Linux as it is Windows.

If you were on Windows, Microsoft doesn't go around updating every single piece of software, but you expect the Zorin devs to do so though. I'm at a loss here.

And do you know why Firefox went from 95.0.1 to 95.0.2? Did you check the change log as to why there was an update? Putting 95.0.2 on your system will not give you anything new or give you anything on Linux. 95.0.2 contains a fix for Windows machines. Just because an update comes out and the number changes, doesn't mean it will have any affect on you and your OS. Firefox uses the same version numbers across all OS's and will change the number as fixes come regardless of the OS it is geared towards. In other words, there is no point in them updating this as it has nothing to do with Linux and it's only for Windows machines using 7, 8 and 8.1. Even Windows 10 and 11 machines are not affected by this update.

Since you don't know the difference between Ubuntu, Debian, Fedora, and RPM maybe it's best you not concern yourself about updates that have zero affect and use all this energy to actually learn the basics of Linux first. Just something to ponder.

If you are happy to be a datastream that you can do nothing about, then keep using firefox as you can't opt out of telemetry any more because their pay masters Google want all your data. Try Epiphany Web browser or FlashPeak Slimjet browser. As for the latest, Zorin has to be mindful of dependencies and keeping Zorin stable is their number one priority - not bleeding edge OS's that need you to have a pack of band-aid to hand. If you want security at it's best then switch to Devuan because they don't use Gnome at all other than Gnome-flashback at 3.38. Personally I prefer KDE and Devuan 4.0 has KDE (Plasma) 5.22.