I have quite a few windows programs installed under wine and so far like this version of Linux. However, I cannot get word 2016 to install. I own the retail version of word 2016 alone, and because of some of its features, I prefer it over Libre.

I am using playonlinux for the install.

The Word 2016 install file is on my harddrive, but the install gets stuck on the Office Logo.

I don't use wine or words, but if it fails try using Windows in VM (like virtual box etc.) and run Word through there.

Storm's suggestion makes sense unless you have less than 4 Gb of RAM. Also consider using FreeOffice from SoftMaker. Just before lockdown I purchased the paid for version of SoftMaker Office and my work throughput was more efficient than MS Word and documents prepared in it and saved as .docx showed up perfectly when opened up in Word 2019 at work.
What it can't do - Compress images - for that I had to use LibreOffice. It doesn't use pts for character spacing but percentages. So for example for a student who needed to read words containing characters 2pts apart, I created a pts document in LibreOffice, opened it in TextMaker 2021 and then used TextMakers percentage spacing to see what was needed.

FreeOffice for Windows, Mac and Linux

Personally I much prefer TextMaker over MS Word any day. German Software engineering at its best!

I had LibreOffice installed but it won't open PDF files so I went to WD 2016 but I grew more irritated with little things that I could not get sorted out so after about 5 weeks I'm back on Libre with Master PDF Editor 5 to open my PDF files .... seems to work just fine ....

LibreOffice will open pdfs in LibreOffice Draw - you can't edit it. I was considering Master PDF Editor but was not sure how the full version would run. Having read rave reviews about pdf Studio Pro from Qoppa Software, that is what I purchased so I could work on Past Exam Papers that needed modifying while working from home. Cost me £107 dollars instead of the usual $129 which equates to about £79 pounds post currency transaction. I also paid for the upgrade from 2020 to 2021 which cost me about $38 dollars from memory. I used the LibreOffice Draw element of LibreOffice to access the images I had originally created in Inkscape when I had a failing hard drive which led to a corrupt exam pdf I had to start all over when new hard drive arrived. I then simply used Okular to extract the text. People do not realise how versatile Okular is - it can read the contents out loud to someone without sight, it can show pdfs as a presentation directly if you use the Presentation tool. It can play PowerPoints and play embedded music files, which I found out when converting a PowerPoint for student use. Magnification is also brilliant, even up to 10,000%. And it has annotation tools and if wanting to keep you output to an archive pdf specific to Okular or it won't keep the annotations. Other pdf software you should be looking at is pdf arranger - this lets you physically see the contents of each page and you can rearrange pages or delete pages and save as a new pdf. If you are wanting to extract text from a pdf using Okular but it doesn't work, this is because whoever created the pdf took images of text! For this use ocrmypdf - it is a command line tool.

If there are still some inconsistencies, as some pdfs can have OCR and images:

To repair a corrupted pdf, install pdftk (pdf toolkit), another command line tool that is superb.

Qoppa Software, that is what I purchased so I could work on Past Exam Papers that needed modifying while working from home

Sounds like a nice program but for me I only use Libre Office to read doc's and write simple text in Writer and track my electricity usage on Calc ..... and now that I can open PDF files with Master PDF Editor .... all is fine for the time being ....

Sounds promising, except for the lifetime price.

Yep, it's not free but purchasing it contributes funding towards the Wine project, which is good for the whole ecosystem. They have a trial option, you can use that to assess how well it works and weigh up whether it's worth the cost for you.

I'm just wondering what are those MS Word features you can't find on Libre Writer.

I did a trial and unfortunately it wont run about 5-8 of my favorite windows programs.

I prefer SoftMaker Office as:
a. It closely mimics the Ribbon (which I hated in Word but it is better in SoftMaker
b. SoftMaker Office is more compliant when opened up in M$ (cr)Apps than LibreOffice Apps, principally writer - I did try submitting LibreOffice documents to work and they would not show correctly, SoftMaker documents get correctly displayed every time, all the time.

I don't use add-ins. On the downside of the GNU/Linux version of SoftMaker, due to the fact that GNU/Linux uses unicode, it does not come with MathType, which the Windows version does. MathType has joined the rental crowd and costs you £69 per licence per machine. 'EquationEditor' in TextMaker Office is the full-blown MathType (even if it is an early 00 version - 2002 I think).

When at work, stupid M$ security would block some add-ins that were necessary for the Braille Translation Software to run correctly!
I read an interesting article in a GNU/Linux magazine, where the author compared his visit to Google compared to his visit with M$. All of Google appeared to be laid back and co-operative. Meanwhile over in the Office Teams, Word and Excel teams were always scoring points of each other. A case in point; anyone notice the inconsistency in Office when 2007 was released? Word changed the basic reference to a document views as 'Draft' and Excel team maintained the phrase used in Office 2003 for their spreadsheets as 'Normal'! I may have got my words mixed up but it was a glaring inconsistent error. Perhaps that is what M$ is, one big glaring error!

If you just wanted to view pdfs then you could just use Document Viewer that is free and usually bundled with most GNU/Linux distributions. 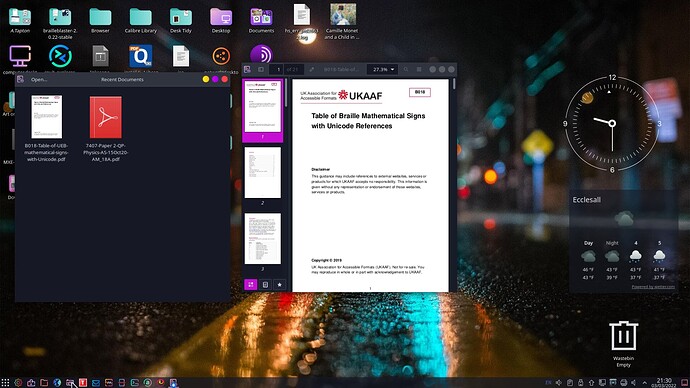 But the best one has to be Okular - not sure if present in the repos, but then again I am using KDE as Okular is a KDE application and a darned fine one at that!

In my opinion, the best alternative office software in Linux are WPS and Onlyoffice. In my experience, WPS and Onlyoffice have better compatibility to handle MS office files. But, if you want to run MS Office or other Windows application you can try Cassowary https://github.com/casualsnek/cassowary

With Cassowary you can run all Windows application like native application in Linux. This software use virtual machine (Qemu) and RDP to emulate Windows environment and display over RDP.

The problem with WPS is that it is 'proprietary' and they won't release the code. It's also a version that wants rental to use (well does in Windows/Android if you want full features). Only Office is a good web-based Office solution and it is what my e.global cloud storage deploys if you want to view any documents I share there. Still SoftMaker is still the best for me but not necessarily everyone.