Would Intel Mac mini be a good match for Zorin OS?

M1 Macs have brought down the price of used Intel Macs. I am interested in the Intel Mac mini because I like small desktop PCs. Would it be smart to revive it by Zorin OS?

Probably. But I don't know. I installed Linux on my Intel Macbook Pro from 2015, so it's likely that it'll run on a Mac mini.

You'd just have to run a live boot and find out.

Btw, what model are you thinking of getting?

I haven't decided on a specific model yet. The weak yen may have an effect on used hardware, and it would be better to wait and see for a while.

In general, I would think a mac-mini would work very well. My iMac is running an i5 chip and runs very nice and smooth with Zorin as do all my peripherals. Of course this is also due in large part to Aravisian and others here on the forum. This forum is head and shoulders above any other forum for support in my opinion.

I installed ZorinOS on a 2012 Macbook Air. And it runs flawlessly. Not sure how it would work on Apple Silicon.

I think that theoretically it shouldn't be an issue. I also run Zorin OS on a mini PC with an Intel i5. The question would be: how much do you have to pay for Mac mini and wouldn't it be cheaper to buy a normal mini pc instead? In the end, if you don't want to use MacOS why would you buy a Mac?

Small PCs often have problems such as low specs and noise, which I would like to avoid.

Got you. I bought a 500 Euro Mini-PC at Amazon and I quite like it: Intel i5 + 16 GB RAM + 512 GB SSD. For ZorinOS it is more than enough. It does not make much noise either. But of course I do play games with it or do some video editing. So it's never on the limit.

However, you may be able to use an app called UTM to run Zorin OS in a virtual machine on Mac computers with Apple silicon processors. 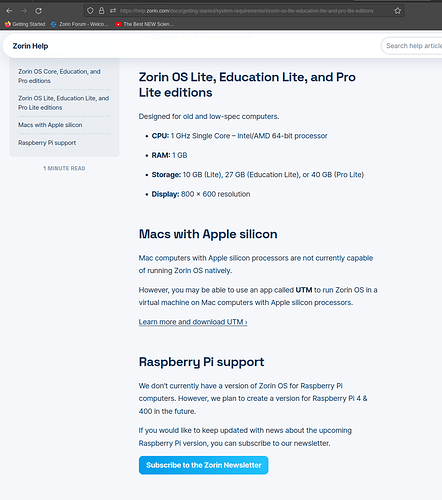