i have just installed zorin 15 bionic as per my system capacity, i am unable to decide if my decission to install this version is correct or not, i use this laptop only for mails , my kids online education(youtube mostly) slight word processing.. after installation i noticed that system is running more slow than windows(booting,running,processing) no sound, firefox taking atleast 2 min to open and 2 min more to open you tube and playing in bits wise, maybe graphic or sound drivers are not corect, i dont know how to correct them , is there any one who can help me to resolve my issues 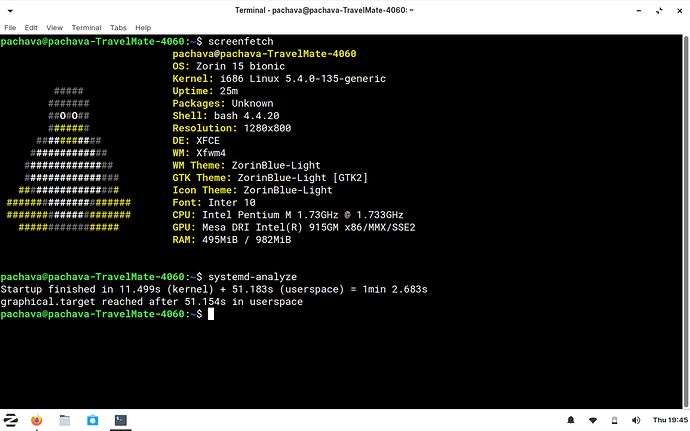 I see RAM (i.e. lack of it) is probably a key factor affecting performance with that laptop. Graphics also uses some of it, so it is poorly equipped for ZorinOS even ZoirinOS Lite. Others on the forum may be able to suggest a lightweight Linux distro that may be better suited to the hardware.

Others on the forum may be able to suggest a lightweight Linux distro that may be better suited to the hardware.

The problem with that is that their machine is a 32 bit one from the looks of the specs listed there (I looked up the processor). There's not a lot of choice for 32 bit machines - most of the good OSes are for 64 bit machines only.

You can try MXLinux, it's a very lightweight distribution and there is a 32-bit only version available.

Another option specifically made to be as light as possible is Bodhi Linux, which also supports 32-bit architecture.

With so little RAM available I would also suggest restricting the number of programs running to one. And while watching YouTube, manually lower the resolution as video decoding is also quite tasking on the system.

I would go with MXLinux or Devuan.
I posted links to 32-bit distros still available here:

Can Zorin OS address the information gap? Chat about Zorin

I wholeheartedly agree with you. To reduce e-waste further, 32-bit versions of GNU/Linux are still present. Not available in Zorin because Ubuntu on which it is a fork dropped support for 32-bit systems. Don't know why the link says 14 when it is 15!

Thanks for your recommendations, i actually tried this to reduce Ewaste, as like laptop it has not technical issues, but low configuration ... my doubt still lives like i have installed 32 bit os only , but even then it did not meet my expectations so is that mismatch of OS to hardware as i have filtered all the given os as per the requirement and finally selected this, where did i misfugured the same.

so is that mismatch of OS to hardware as i have filtered all the given os as per the requirement and finally selected this, where did i misfugured the same.

Yes. ZorinOS Lite needs more than 1GB RAM to work effectively. I believe your laptop has less than that, so will not perform well.

I applaud your choice to re-use that working laptop instead of scrapping it. Whilst many distro's have moved away from 32bit versions, there remain many lightweight distro's that you could try. Try some and come back here and tell us your experience, as that may help others with 32bit machines find a suitable OS.

Actually that depends. My old Toshiba Satellite L30-10S has exactly 1GB of RAM and it still runs alright.

Well yes I would expect that, but 1GB is still more than twice what the OP has available.

Minimum system requirements for Zorin Lite are twice the requirements for Bodhi Linux. I think you should reconsider using that instead, and at least give it a try. They also have forums that seem quite active.

It's important to understand that while hardware has gotten much more powerful over the years, software has also grown hungrier for those resources. Even something as seemingly innocent as a browser with a few tabs or a document editor like LibreOffice Writer can eat through your RAM unexpectedly, if you are not careful.

Modern computers get around this problem by simply throwing more power at the issue. But the problem still exists, and lower-end hardware will simply not be able to compete at one point.

Ironically, a good example of this is Bodhi Linux's forums site. They have just now added a snowfall effect which makes the fans in my laptop ramp up a bit, just by opening another tab. It's a nice touch, but lower-end hardware will definitely feel it.

This is not to say you can't use your old computers, but concessions need to be made:

hi, thanks for your suggestions , i am actually trying a project to reuse low end hardware , this can help many students to get on in this projects, few of our team mates are trying to collect as many pieces as we can and get them ready and distribute to needy students... in this process i am actually work on the best light versions of OS... definitely i will try and share review on Bodhi linux too.. need your valuable sugestion on this cause

i am actually trying a project to reuse low end hardware

Recycling old PC's must be applauded

In case you have not seen this review, ZorinOS Lite and other lightweight linux distro's are listed here: 11 Best Lightweight Linux Distros For Old Computers [2022 Edition]

There is one excellent distro missing from the lists which is very similar to Zorin: Pearl Linux. #10 has a 32 bit Debian Buster-based version and it works like a dream. I even have the 64 bit version running smoothly on a 15-year-old Toshiba Satellite.