I like my built in camera for zoom.. it's convenient. I wouldn't do progressions online streams with it.... but for meetings, school... don't need much else.

As long as there are cats to be seen at your meetings, it will be redeaming. If its for school, once again we need cats to check the answers on your tests. If the cats yell out a hiss, that means somebody was cheating! If a cat shakes their head no, that means your getting an F. If the cat shakes their head up and down, your going to pass with a D, C or B. IF the cat starts leaping from desk to desk in uncontrollable excitement, your getting an A.

OK ... looks like I gonna try my corded mouse again I have a A4TECH Bloody T5A ... as you guys seem to recommend a corded brand ... will try and find some pictures of the cordless mouse but right now I have a full plate ...

Seems I tried to download XDM to my Zorin and really screwed things up ... my Internet keeps kicking out didn't do it before I tried to install XDM ... now I can't find out how to uninstall it ... tried some steps online using the terminal but they didn't work ... so for the time being I'm back on Doze ...

Sorry for the time delay in replying to all the posts but I am living in Southeast Asia now so the time differences vary depending on where you live ...

OK back at it with my XDM problem ... I downloaded the 2020 version from their website ... I'm using Vivaldi browser and read somewhere that you have to set up a proxy config to make it work ... which I didn't do so maybe that is the problem ...

Thanks a lot for your help and everyone else's also ...

Xtreme Download manager?
Given your location, I can see the benefit of a download manager, but Caution is advised. XDM creates issues and...
Combined with Vivladi definitely compounds it.

Thanks what Download Manager do you recommend for Zorin ... I have used the paid version of IDM for years but I know it can't be used on Linux ...

I'm looking for something that places my downloads weather it be videos ... pictures ... documents or other downloads into separate folders so I don't have to hunt them all up and do it manually ...

And a lot of people unfortunately don't know, that download managers, are known to cause file corruption in downloaded ISO's! So there is most certainly a reason to not use them if can be avoided.

I already did that by setting up a folder on my desktop to hold the downloads ... so I guess that is the way I will have to go now ... I can just move the downloads to their proper category ... now if I could just get rid of this #^*&% XDM and get my internet back I'd be a happy camper ...

Anyone got any ideas on why I have no WIFI ... when I first fire up Zorin I do but then it shuts down ... I also have a USB Linksys WIFI dongle that works on Win (so I know it is working plus my laptop WIFI card works in Win ... in fact if I leave the USB hooked up with WIFI card I get a Wi-FI 1 and a WIFI 2 ... on my internet access screen in Win ... Zorin shows nothing 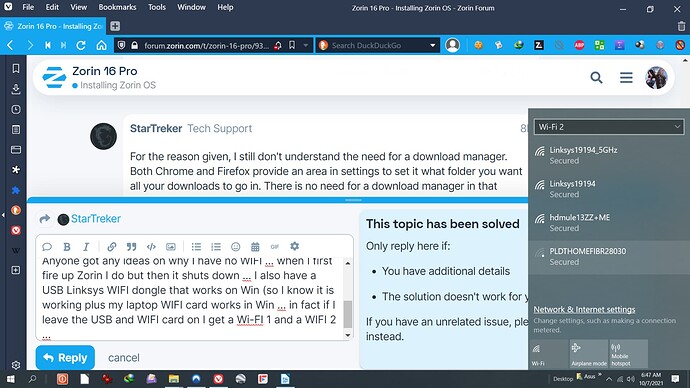 Sorry I'm the dummy that hit the solved but ... I unchecked it ... LOL

Hey, were all learning here. For many of us, were completely new to this stuff. Even though I am a techy person, I came from Windows and MAC, with 0 knowledge of Linux.

I switched to Linux about 6+ years ago, and I've still been learning ever since. So, don't beat yourself up too much there. You are a member of the Zorin family now, and I consider you a brother.

For each issue that you resolve, brings more Linux knowledge to your pallet. The more you learn, the better you get. Just the fact that you have Zorin OS 16 PRO, supported the dev's to do so, you earned stellar status from me!

Thanks what Download Manager do you recommend for Zorin ...

I do not recommend any download manager. The only reason to recommend one is if you are in a position that one is necessary to download from the web. If it is not necessary then it is best avoided.
I also recommend avoiding Vivaldi, as well. Vivladi Browser has fundamental flaws in its design that result in massive memory leaks. These leaks are more troublesome than just overheating and high CPU usage. They can result in kernel panic and cascading failure.
I avoid Vivaldi like plague these days, after its crashes causing me to wipe and reinstall Zorin OS twice.

I totally didn't know about that regarding Vivaldi!

The last time I tried out Vivaldi, was many years ago when I was still on Windows I believe. I did like that it was highly customizable. But what I didn't like, was that the layout was not something that I was used to, and I felt there was too much of a learning curve to just pickup and go.

Another perfect example, Aravisian works on cars, he should understand this perfectly! With a simple car, you put the key in, put the car in drive, take the E-break off, and go! Its literally that simple!

With a Tesla, completely different story. I've watched video reviews on Tesla cars. They have a overly complicated computer system, everything in the car is tied to the computer, including things like a bumper sensor that can render the car inoperable, or a charging port door that can do the same thing.

When you get into a Tesla, its like getting the space shuttle going. Ask any beginner to start the car, they aint gonna know what to freaking do. Tesla's by design are absolute garbage, which is my opinion on Vivaldi browser for beginners.

Exactly! Get a Chevy Volt instead if you want an electric car. At least Chevy supports America and has an infrastructure of support centers and dealerships all throughout the country incase you need service.

The only download manager i can think of is JDownloader. That one i used in Windows and i do know that one is working under linux.

Well I'm not sure about problems with Vivaldi in Zorin but I have used it on Win for more than 5 years with 0 problems ... but that is just me ... I've used FF for more years than I care to count ... Opera for about 3 and as I said Vivaldi for more than 5 ... but to each his own I guess ...

Yes I download a lot of things from the Internet daily ... videos ... pictures ... info on various things ... like now I have tons of stuff downloaded on Zorin both videos and documents ... I have 4 1TB USB 3 Passports and 2 more on my laptop full of stuff on things that trip my fancy ... I am retired so I have plenty of time on my hands ... LOL

Thanks for your comments as I do appreciate your views ...

Thank you for your comments ... I have only used Win from back when it was DOS in fact my first computer (if you can call it that) was a Radio Shack Tandy EX with 1 5 1/4 floppy drive and no HD ... bought it brand new with money I got from my tax return ... LOL ...

I tried Lindows way back when and another Linux brand but found the support forum left a lot to be desired as it appeared to me that if you didn't know anything about Linux you were ignored ... at least that was my opinion ...

But here seems entirely different ... I'm getting very fast and helpful answers to my questions and I will try and keep my questions on one subject and not a bunch of subjects all jumbled into one post ... hard for me to do as I type the way I talk ... LOL

I tried Zorin 16 and liked what I saw so I decided to give back to the developers a little something by buying Pro ... I knew from the git go that there was very little changes in the Pro system from the OS 16 ...