Writing here is more of a rant than anything else, not really expecting this to be solved in any way soon.

TLDR: Zorin 16 Lite is great, except – how do you change, bottom right (or left) corner resizing drag area to be bigger?
This is XFCE and Zorin theme issue, saying “use another theme” defeats the purpose, I chose Zorin because it looks clean and does not use a lot of resources.

Long version:
I’ll go on a tangent here. Recently I was given an Intel Celeron (with 2Gb of RAM) laptop, with an ask: “I cannot watch YouTube videos on it, can you do anything about it?”. An owner is an elderly person with some degree of visual impairment.
I booted the computer up and saw the problem right away. It was struggling to run Windows 10, just opening Chrome would literally take longer than a minute.
This is not a very old laptop, physically everything is fine, just by design - it is way underpowered, and whoever decided to ship it with Windows 10, should be slapped with a fish.
So now I was on a hunt for a different OS that would be less resource-hungry but still look nice.
Main things needed for this computer:
• Use less than 2 GiB of RAM with the browser running YouTube without swapping.
• Be responsive enough on Intel Celeron
• Able to open and view photos and play some videos saved on hard drive.
• Do some very basic word processing.
• Able to open inserted flash drives to copy files to/from the computer.
• I’m not expecting the owner to do OS updates by herself, so it should be stable enough without updates for a year or two.
• File browser and application launching should be intuitive, preferably close to Windows XP workflow.
• Windows should have usual decorations, like title bar, maximize, minimize, close buttons.
• It should be easy to open, close, drag, and resize windows using a touchpad. And this one is where Zorin is struggling.
I’ve tried different distributions like Ubuntu, Mint, Debian, Zorin Lite, and KDE Neon. My impressions:
1. Ubuntu with Gnome – too heavy for this computer, out of the box workflow is more like Mac, possible to make it behave like windows, but anyway – 2 GiB of RAM is not enough.
2. Mint Cinnamon – looks good, nice themes, but still too heavy.
3. KDE Neon – surprisingly full-featured and running better than Gnome or even Cinnamon.
4. Zorin Lite – at first, when I booted it up, I thought – looks nice, responsive, does not eat all the RAM straight away. It would be perfect.
So my choices were Zorin Lite or KDE Neon. I’ve started testing and customizing Zorin. Not really much to do, just copying back photos and videos, testing out browsing.
But then I noticed that I cannot resize windows the usual way – dragging by the corner. The area at the corner is so tiny it’s near impossible to grab using the touch-pad. I know you can use Alt+Mouse buttons to easily drag and resize windows. But I do not expect the owner of the computer to learn that trick easily.
I was looking for solutions online, most of them include using the different themes with bigger window borders, which is not really useful. One of the main reasons I picked Zorin is for its clean theming and consistency. Another possibility was to somehow patch existing themes, instructions as to how to do that are vague at least, so I’m not comfortable doing that.

So, kudos to the Zorin team for making a great-looking distribution, just this little nag with window borders.

Thanks for reading this rant, not really sure what useful info (if any) I have given. I just hope this will reach someone on Zorin or XFCE team, so they make resizing windows in XFCE easier or configurable.

If you do a search on this forum for resizing borders you will get several threads discussing this problem. One of them suggested using Window Tweaks for XFCE as a possible solution to resize the borders to a more usable size. 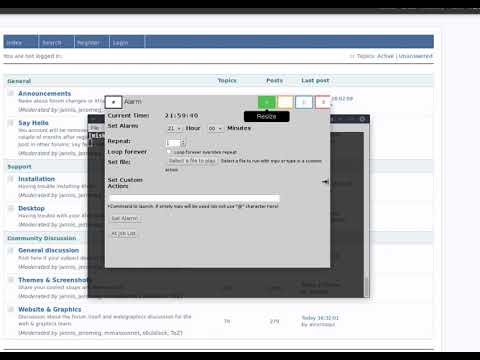 I had a look again at Window Manager Tweaks, but cannot find anything related to window resizing in there, some accessibility and compositor options, but nothing directly tied to window border/resize area. Thought, my google-fu has failed me miserably.
Just noticed that some windows are worse than others. For example - LibreOffice, or Alacritty windows have resizing problem, while some (usually with client side decorations) are much better.
Thanks for response, I just hope I'm missing something really obvious.

Thanks for reply, had a read into your linked bug report. It drags from 2015 up to a year ago, with no decent solution, except "Modify your themes", or "Won't fix, as this is a theming issue".

As to the other fix, it is better than nothing, but still a hack. By the way, left side window menu already has "move/resize" option, so it's one additional click away without any hacks or custom buttons.

Thing is - some people already have old habits, one of them is "resizing window by dragging the corner". If it's not easy to do, this will annoy them to hell, no matter what other options there are.

There is nothing in window manager tweaks that deals with Window Resize.
This issue stems directly from how XFWM4 manages window borders combined with the current (poor, in my opinion) trend in making borders 1 pixel in size.
1 pixel is not enough of a grab area.
In .css, the border margins can be extended to create an invisible border area to grab, allowing themers to make a 1px sized border with a 10px grab area.

In XFWM4, I solve this problem simply, by creating larger window borders by matching the background color into a portion of the border with the 1px colored boarder that was in the original theme.
Recently, I made a Cinnamon D.E. version of the Zorin themes called Zenith including Metacity Window Borders.

As users look to Cinnamon and even to Mate desktops, they must also contend with the Zorin OS default themes not fully working on them. Until now... Starting at the first of the series (I will make each theme) Zenith Blue-Dark for Cinnamon or Mate desktops on Zorin OS 15 or Zorin OS 16. This includes the Metacity Window Borders (I styled them to close no matter how far you jam the pointer into the corner per comments made by a few users requesting that in Gnome and XFCE). Cinnamon panel and…

This thread may inspire me to expand that to Zenith with XFCE, that includes large grab areas.

About people they are sometimes very precise if something not exist or they cannot used things with earlier operating system then they can tried him but not accepted. This is could be old habits. I know many retired people who playing some games or something else using old media player or scheme folders.
"Old trees are not replanted" - they don't want learning new things to much difficult for them. I talking about people 60 years old or more. The world go forward with technology but older people building our countries with many ages. That is diffrents because building economy old times no internet, no e-mails. I seeing two worlds and must sayed many countries over 60% are people retired and tired and mostly using a mobile with some messenger to have a connection with family or friends.

@Aravisian, I can't say no please

, would try to do this myself if I knew what the heck I'm doing (more of a "programmer" than a "designer" kind of person). If there's a way to automate patching of themes, I could try, but I don't think it would help much.

I don't know particulars of theme making, wouldn't extending border interfere with some controls which are in the corners (For example libreoffice has buttons there), make window look ugly or add transparent padding to the window?

Just a silly idea, if as you say XFWM4 is the problem, can I use another window manager, like the mentioned Metacity, or even Compiz? Would it help? Going to try this.

@Bourne I agree, as I said originally, the person I'm helping is retired, I'm trying to make her experience as comfortable as possible, not to jump through hoops and loops.
I also decided to record some short tutorial videos on how to use new system, like watch photos, work with files, change keyboard input layouts, connect to wireless.

I don't know particulars of theme making, wouldn't extending border interfere with some controls which are in the corners (For example libreoffice has buttons there), make window look ugly or add transparent padding to the window?

Nope. I have done this many times; I assure you it will be fine.

Just a silly idea, if as you say XFWM4 is the problem, can I use another window manager, like the mentioned Metacity, or even Compiz? Would it help? Going to try this.

Yes, you can. The easiest approach would be to simply install Cinnamon Desktop, rather than try indivudually installing muffin and metacity and what not...

Comes with Nemo File Manager, which I prefer, anyway.
Cinnamon is the D.E. used by Mint, but I will plainly say, it works very well on Zorin and doesn't bog down after using it a while.

@Aravisian, I can't say no please

In the meantime, enough users have voiced concerns on the issue, I will go ahead and get started on it. I will tag you with @WillSo when they are complete, should you still need them.

Yes, you can. The easiest approach would be to simply install Cinnamon Desktop, rather than try indivudually installing muffin and metacity and what not...

Comes with Nemo File Manager, which I prefer, anyway.
Cinnamon is the D.E. used by Mint, but I will plainly say, it works very well on Zorin and doesn't bog down after using it a while.

Will have a good look again. I've tried to use Mint with Cinnamon desktop, and it was a tad on the slow side, XFCE uses less resources, that's for sure.

I consider Cinnamon to be a Mid-weight desktop. XFCE and LXDE or LXDE-gtk3 are Light Desktops.
Gnome is a Heavy Desktop - though with due credit to the Gnome Developers, it is surprisingly very light on its feet in spite of its weight due to some useful tools and smart programming to minimize its own impact.