Zorin on my new Asus laptop

Hello. I purchased a new laptop. It is Asus Vivobook 16X (M1603QA-MB711WS) and it's coming with Windows pre-installed. It has features like Fingerprint, WiFi master software, and other features. Please see this screenshot. 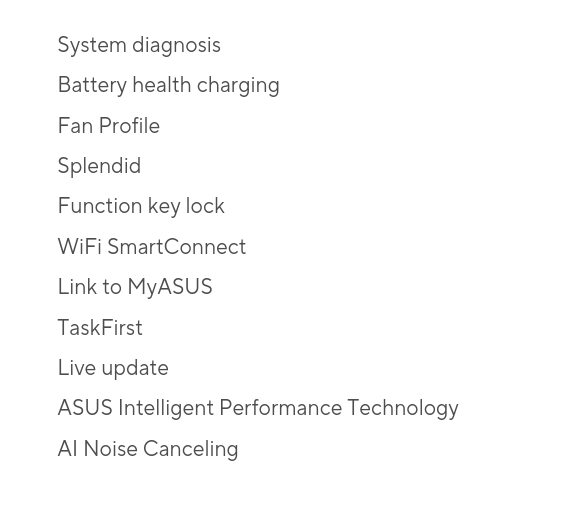 Now my question is will all those features work on Zorin OS 16? I wanted to use Zorin OS on my new laptop too, so I thought I should ask before completely uninstalling Windows.

And for the installation what do you advise? It comes with a 512GB NVMe SSD. I'm thinking of how to partition the disk while installing Zorin.

If it's completely new I doubt everything works out of the box. May require some newer kernel (5.18) and some tweakings and stuff. Try the live seesion of Zorin and see how well it runs.

Ok. Will try that after my laptop arrives

If any of those items are applications they will not work in Zorin, not even with WINE. Fan profile on my Asus desktop is in the BIOS. As for updates I download to USB and update the BIOS that way. Everything else will be apps that rely on the Windows desktop.

There are applications to support the finger print reader, but not all models are supported yet. It's like any other hardware in Linux, it depends on someone making a port for it. Things that have been around a while have support. Things just coming out, unless the manufacturer creates a Linux port, usually has to wait until a developer adds one.

The worst you could do is try. If it doesn't support all the hardware, can come back to it later and try again. Linux is always evolving.

Okay. How about partitioning the 512 GB NVMe? Any advice on that? Do I mount the entire disk to / or create partitions? I am thinking of using Timeshift to take backups when I need to do major changes to the system.

In the past I would have advised Ext2 non-journaling but advice I received when installing an SSD for first time on an old Dell E6500 was that I should format to Ext4. You will need to use Windows Disk Management to make space - Zorin can't do that for you by hoping to install it side-by-side. If you have any important data on the drive back it up before attempting anything. There may be some hidden partitions and if it has the Windows lock in the boot sector you may not be able to get Linux installed - this is where the CoA data is stored from what I have read elsewhere with people having eMMC issues which your notebook won't be. We've already learned from Storm that Lenovo no longer allow Linux to be installed. My feelings on this is that it is part of the master plan to reboot the world in a technocratic nefarious global design. If the version of Windows has any boot repair creation tool, make the backup media. If this is an optical-driveless machine, don't know how you are going to do that. Also don't create a swap area. Advice from a member of a Linux User Group is to use Ext4 over BTRFS - better life expectancy with Ext4 - if you used BTRFS you would shorten the life of the drive - advice given from the LUG member whose had much more experience than me.
Another LUG member formatted an SSD to Ext4 and still going after 6 years.
I would advise that you save timeshift images to an External drive formatted to Ext4 too or timeshift won't be able to restore if saved to the default NTFS that external drives come in these days.

There is a tutorial in the tutorial and guides category of this forum that walks through partitioning and installing zorin using the something else method: [HOW TO] Partition & Install Zorin 16

My new laptop comes with a 512 GB NVMe drive. Do you think it would be a wise decision to have a partition of about 100 - 150 GB in size and install Zorin in that partition? My thought process is that if I choose to switch to another OS, I can install it on the 150GB (let's say I chose 150) partition without worrying about backing up my existing data. If I simply choose all the 512 GB and mount it to / mount point it would be difficult for me when changing OSes. What do you guys say?

Do you think it would be a wise decision to have a partition of about 100 - 150 GB in size and install Zorin in that partition?

If you are not a gamer or saving a lot of big files like music and movies, then yes that should be fine.
A gamer can gobble up a terabyte easily.

Let's say the 150GB gets filled. Is it possible to expand if I resize another partion and can use it?

Let's say the 150GB gets filled. Is it possible to expand if I resize another partion and can use it?

I think these questions should be in a new thread on each, rather than clumping all issues into one thread. This way, any solutions found can easily help others.