When I first boot into Zorin 16.2, it gave a log in error very briefly but then continued onto letting me either try/install Zorin and also login to Zorin (after installing it), is this normally meant to happen?

That is the live image on the usb. You can use it that way, but if you choose install Zorin will be written to your harddrive. You have to install the iso to ausb for installation. Running it from your hard drive is not recommended.

What happens if I install iso to ausb?

You want to install Zorin on a USB-stick ? I mean a real OS, running from that USB-stick ?

What happens is that 1. you'll need a large capacity USB-stick (> 32 Gb !!!) 2. The installer of Zorin will format the stick and partition it ..... Making partitions on USB-sticks will eventually destroy that stick. Why ? This is not an SSD and most inside the chips of the USB-stick you will mix up everything of NAND-ports and their memory-management. So yes it is possible, but NO it's a very bad idea to do it and rely on it. There are some minimal Linux-es out there (AntiX e.g. ) that pro's use for chrooting purposes, but no more than that.

But could you please be a little more informative on what you really want ?

I see command-like entries on every boot up, shutdown, and when logging in after a stand-by but not a problem, it just make it look like there's a problem or seem instable. I read a post explaining that can be hidden if they aren't serious but I can't find it.

I just want the brief error log to be gone everytime I boot into Zorin via SSD.

Also why do I keep getting into the Grub menu and have to press on 'Zorin' when I boot up?

You don't have to press Zorin - it will boot into that anyway. Just like NTFS, Ext4 is a journaling File System and boot time should not be reduced to below 5 seconds - the default time is 10 seconds but you can edit GRUB to reduce the time to 5 seconds - anything less and you could corrupt the file system, just as you would with a Windows NT PC - when I was an IT contractor, working for a local authority's preferred IT provider, their key boffin told me of a Director in the Local Authority who had a penchant for reducing boot time to 0 seconds which could screw the OS completely. Also if you are dual-booting, GRUB will show all OS's at your disposal, giving you time to choose which one to boot into.

I just want the brief error log to be gone everytime I boot into Zorin via SSD.

@337harvey, @joshuaorbit and @swarfendor437, I think Z_123 wants to hide the entries that appear on the black screen after seeing the pc logo but I don't find that post containing the instructions to hide them.

The answer might be the one with 10 votes here:

How can I show or hide boot messages when Ubuntu starts?

@Z_123, you can try doing as explained on the link swarfendor437 provided if it's what you need. @swarfendor437, sorry, I meant a post here on Zorin Forum. I searched grub messages, login errors, grub post messages and other stuff but I don't see the post I remember. It was right referring specifically to how to hide these entries appearing after boot ups, but only if they weren't critical messages.

So do you need to use the terminal for all this as well?

This is for the old version of Ubuntu, I'm looking for the 22.04 version solution.

So anything that successfully works on Ubuntu 20.04 will work on Zorin 16.2?

Not necessarily as it will use different updated libraries and other elements.

Ok but I need a solution for these removing these errors, as well as removing that Zorin grub menu that keeps needlessly showing up everytime I boot my computer on Ubuntu 20.04

How to Hide Grub Boot Menu in Ubuntu 20.04 LTS - WebSetNet

This tutorial shows how to hide / disable the Grub boot menu while booting up.

Can I do this without installing any software and only just use the terminal command?

Yes, scroll down the page to get what you want to do. If dual booting you won't be able to boot into Windows anymore if you do hide GRUB: 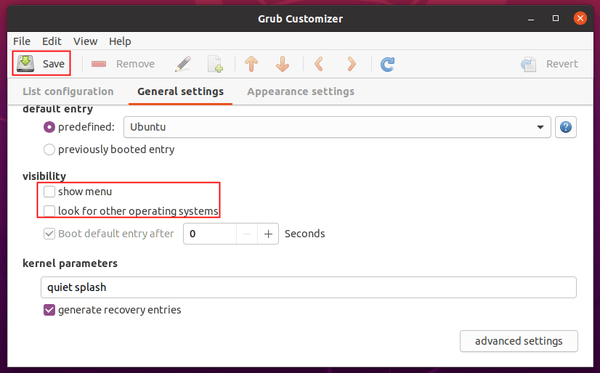 This simple tutorial shows how to hide / disable the Grub boot menu while booting Ubuntu. You can do the job easily via Grub-Customizer (available in Ubuntu Software) under General Settings tab. Ho…