Can My Laptop WiFi Card be Turned Off

Months ago I was having a problem with my WiFi/Bluetooth card ..... with the help of Aravisian I installed a WiFi/Bluetooth dongle and it has been working just fine ..... however since I reinstalled Zorin 16 Pro several days ago it had remained off until I reinstalled the procedure to turn it back on yesterday .... I've noticed that sometimes my laptop card will kick in and my dongle will quit and visa versa .....

I can tell this as the light on the dongle will start blinking showing it is working but when it stays off my internet doesn't shut down so the laptop card must be working part time ....

Another thing is that my Logitech K380 operates with Bluetooth ..... I believe in the past I mistakenly said it was WiFi ..... and will occasionally drop out and I have to restart it ....

For the longest time .... like 3 months ..... my WiFi dongle had been working flawlessly until like I said I reinstalled Zorin .....

When you turn off wifi in the os, it should power down after a few minutes (depending on the battery config) but will not completely turn off unless you disable the use of that device.

but will not completely turn off unless you disable the use of that device.

How can I disable the WiFi card and just have my WiFi Dongle enabled ???? ....

To disable your wireless card, blacklist its driver. From a terminal: 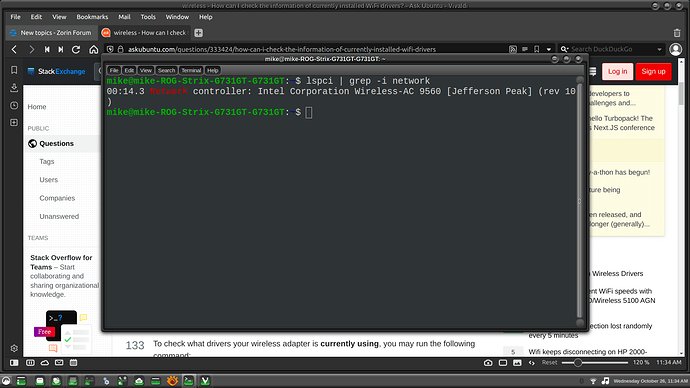 Now just so I'm clear this will shut down my laptop on board WiFi/Bluetooth card ..... leaving my WiFi dongle to operate without interference ????? ..... will this effect my Windows 10 operation or will my laptop card still work on Windows ..... I think it probably will as we are only "Blacklisting" it on Zorin .....

Next question if something goes south how to I reverse the blacklisted laptop card ?????

Would it be better for me to go back to Windows 10 and just disable the driver there ..... this dongle is supposed to work with Windows 10 also and it did if I remember correctly ....

Can you please show the output of sudo lshw -C network?

how to I reverse the blacklisted laptop card

Just remove it from blacklist

An easier way though, may be for you to edit your /etc/network/interfaces file. Default, it should be blank.
In terminal, run ifconfig
Find your Wifi Card (Built in). On mine it is wlp5s0.
Whatever your is, replace mine from the example below with yours.
My example:
iface wlp5s0 inet manual
Yours may look like ``iface wlan0 inet manualor something else. Just use whatever was shown in yourifconfig`.

In your /etc/network/interfaces file, paste in your iface wlp5s0 inet manual with the wlp5s0 replaced with what you saw in ifconfig.

Then yours would be:
iface wlo1 inet manual

You need to specify an editor if calling a text file in terminal.

Or, you can do it with GUI

Tap the up arrow on the toolbar twice... Then double click /etc > then network and then open interfaces with your text editor. Don't forget to save after pasting in the content.

You can unload the module:

To blacklist, if you still need to: 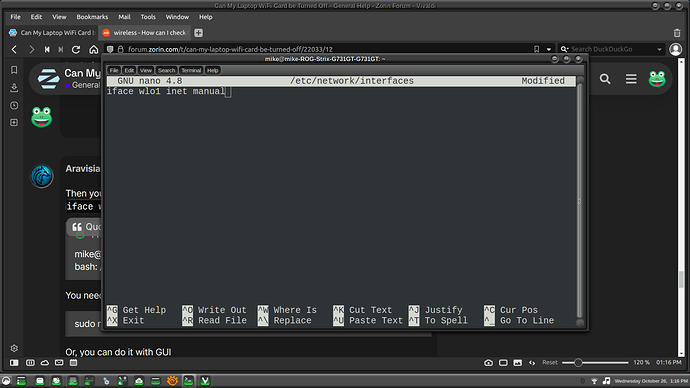 Well I tried the photo I posted above and it sure did shut down my WiFi card but it also killed my internet .... so thankfully I made a copy of the commands above and was able to go back in and delete ..... iface wlo1 inet manual ..... cause I could get back to the board ....

So what did I do wrong .... my WiFi dongle is blinking every so often but not like it used to do when it was working before .....

After that happened, did you try connecting using your Wifi Dongle?

Yes .... it was already plugged in before I shut down my card .... I restarted the laptop and plugged and unplugged the dongle several times ... the dongle keeps blinking so I can't really tell if the card is working or the dongle is working .....

I think setting it to manual means you must enter network settings and manually connect that first time. Once you set it, it then remains that way instead of the system Auto-Detecting the built in wifi card.