Is it possible to stack multiple icons or apps onto just one icon on the Dash Panel?

Similar to how MacOS is setup with Stacks.

Are you using Zorin OS Core or Zorin OS Lite?

On Zorin OS Lite, you can create an App Launcher on the panel, then add multiple applications to that launcher. It will then open a popover menu showing the apps similar to Mate Desktops App Drawer.

You could even have 3d style Mac Dock using Cairo-Dock (fallback) available in store: 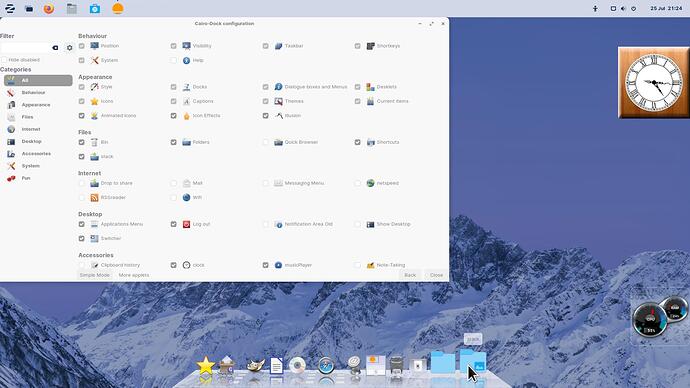 Thanks, I’m on Zorin OS Pro.

I’ve looked for options to do this but can’t seem to find them. Please could you point me in the right direction?

hide a few applet to have a neater panel, and make them show up again by a click

Thanks, I’m on Zorin OS Pro.

I’ve locked for options to do this but can’t seem to find them.

That would be Gnome desktop.
Gnome prefers the app grid or Activities Overview. Like Microsoft, when Gnome prefers a method for users to use, they try to lock things in so only that method can be used.
It may be that there is an extension that can mimic the app drawer, but I am unaware of it.
Regular Gnome users may be more helpful than I. You also may try searching gnome extensions that act as an app drawer.

Thanks again, I've been searching and beginning to think it's not likely to be possible.

Thanks Aravisian ..... I knew about that setting from before when accidentally hide my taskbar and couldn't find out where it had gone to .....

I don't want to hide the whole taskbar just combine some of the icons together under one icon which will remain visible on the taskbar when using a program like 7-Stacks ....

In the picture below you will see my desktop with all the icons on it ...... the center ones in the taskbar at the bottom are the ones I would like to combine with only 3 left showing ...... the rest to be combine under another single icon called "More" or something like that ..... also in the top left hand corner are several more that could be added ....

When I needed to open say pictures I could just click on "More" and open the Xnview MP or gThumb app or any of the other app icons under the "More" icon .....

I've searched the web for such a program and can't find anything except a very few programs using a Virtual Box which I don't want to use VB or any other virtual type program ....

Tall order I know if it is even possible .... 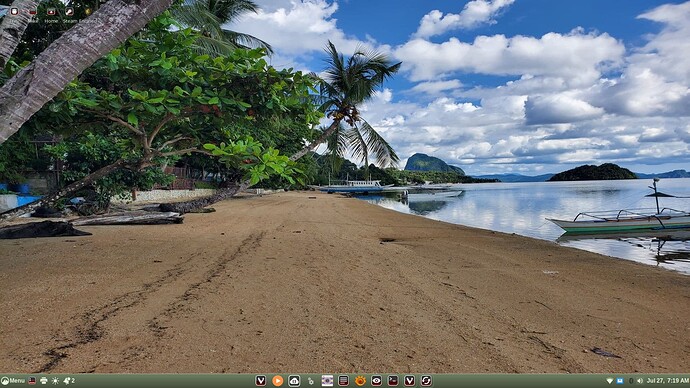 hmmm... I see...
That would be convenient for me, too.
Other than the Right Click Menu > Open With option, I am not aware of any applet for the panel that does that.
XFCE can stack multiple apps in one launcher, but not for choosing from Pictures like that. Rather, you would choose which app to open from the launcher, then within that app, open your file.

Let me log in on Cinnamon D.E. and test this a bit.

Let me log in on Cinnamon D.E. and test this a bit.

I have tried this on Cinnamon D.E.

The Panel Launchers applet is similar to the Launcher item in XFCE, however, while it will add multiple apps (and icons), it adds them as a Tray, not as a Menu.
I will keep looking for a Cinnamon Extension, but I think it is likely that it does not exist.

Why aren't you using keyboard shortcuts for your most used apps? It keeps the desktop and taskbar cleaner, don't have to mess with the mouse and no one else will be able to mess with your computer! I configured KDE this way and love it!