I decided to go with Deja Dup as it allows me to physically view and select or deselect the folders I want to use ..... much easier for a simple person like me ..... anyway I took a 1 TB external drive and turned it to 2 partitions .... 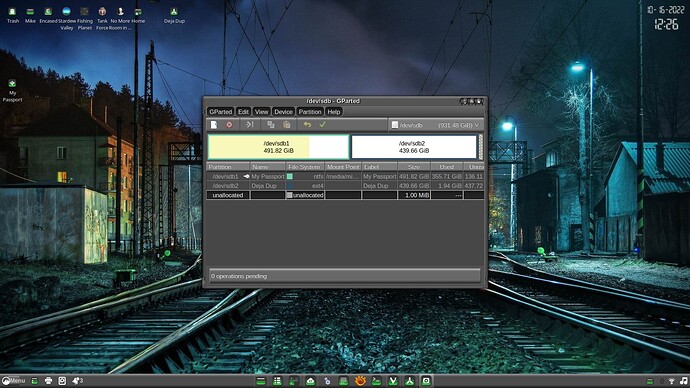 Following the instructions I found on line I did the following ..... 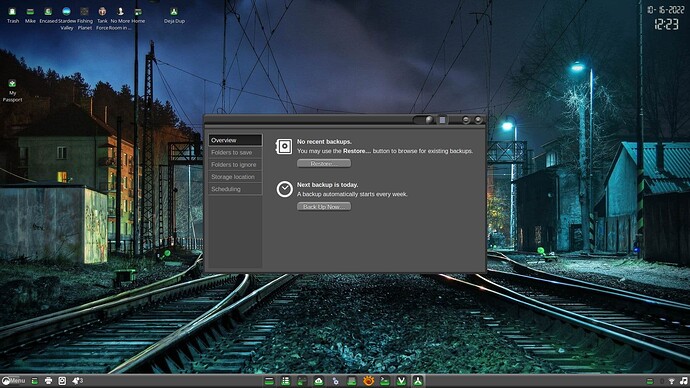 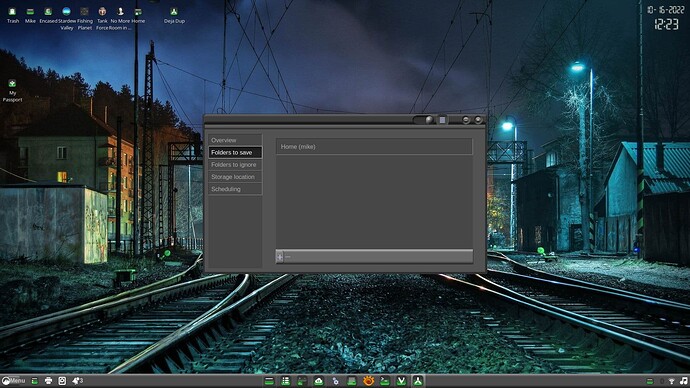 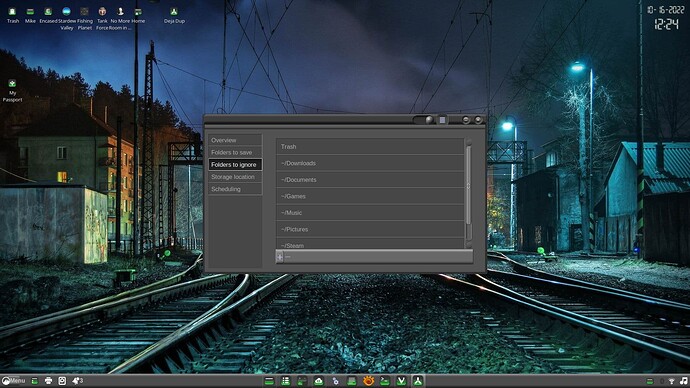 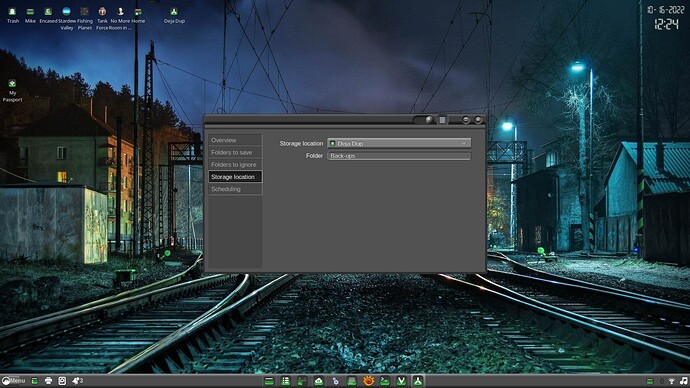 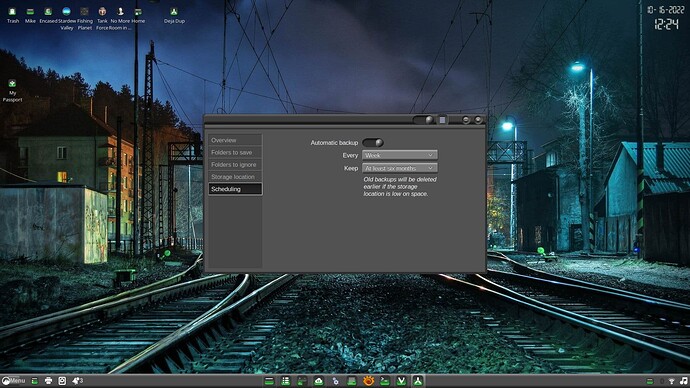 All looked good to me but when I clicked Back Up I got the following two photos .... I have been over and over this but don't see why it wouldn't work .... so what did I do wrong ..... 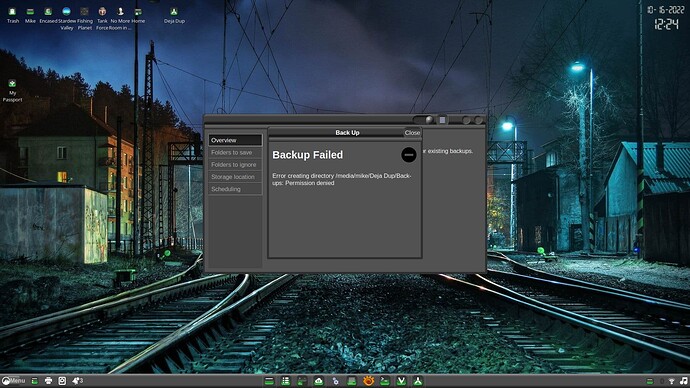 I did receive a notice when I first plugged in my Passport ..... I received the follow message .... 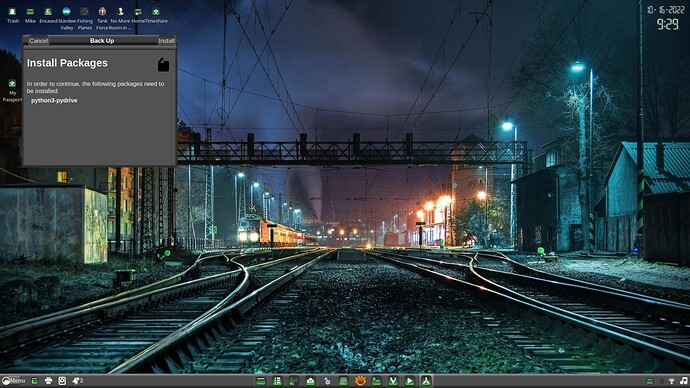 As I had used this external HD many times before I just ignored it .... after a few tries the message didn't repeat itself any more .... now when I plug it in it just goes right to the Passport main menu but the Deja Dup partition doesn't show up ...... it does how ever show up i the side menu if I look in my Home folder ..... when clicking on Deja Dup in the left menu it is empty .... 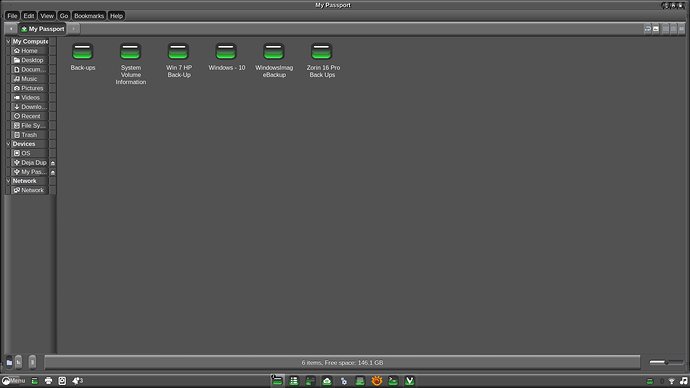 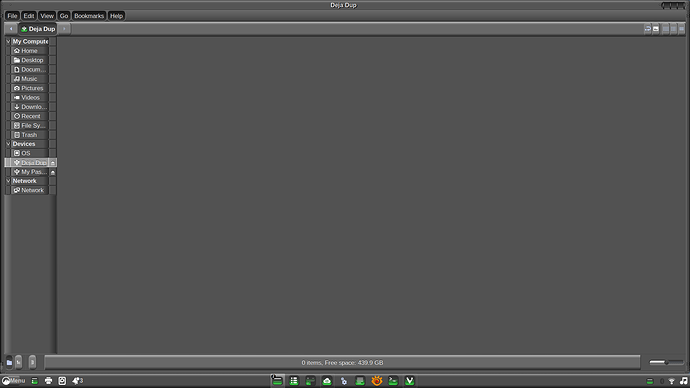 I’m not sure where the customisations are saved, so i cannot say.

That is a good backup tool too. It is more general purpose and i suppose a more traditional backup solution. It’s best to keep those backups on a separate drive.

Timeshift is more intended to rescue your installation if an update or “software experiment” causes problems. By default it keeps several daily backups in the background. By default they are stored on the same disc as the operating system. Generally, for its intended purpose that’s part.

Both can also be used in combination. Timeshift to keep your system running. Deja dup to keep your files safe.

All my customizing items I use on Cinnamon DE I keep in the hidden files .icon and .theme .... as far as anything else I have no idea ....

Yes it seems a whole lot easier for me to use ..... I was using Rescuezilla before and loved it but it takes a copy of the whole drive each and every time you use it which takes up a lot of HD space ..... with Deja Dup as I understand it it only copies the files that you changed or added since the last save .....

I just wish I could get it to work as I showed in my photos above I just get "Backup Failed" .....

I would also like to move all the posts above dealing with Deja Dup moved to it's own thread so as not to confuse anyone and also for better searching using the Tutorial & Guide feature ..... I just don't know how to do it .... 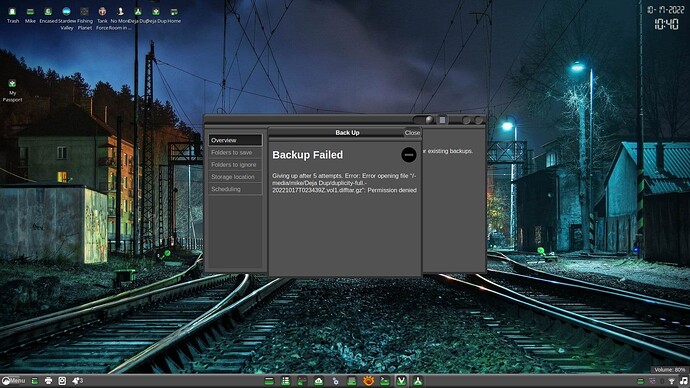 I little more info .... it seems that I am not the owner of the Deja Dup partition it appears to be Root is the owner .... and how did Root get to become owner ?????? 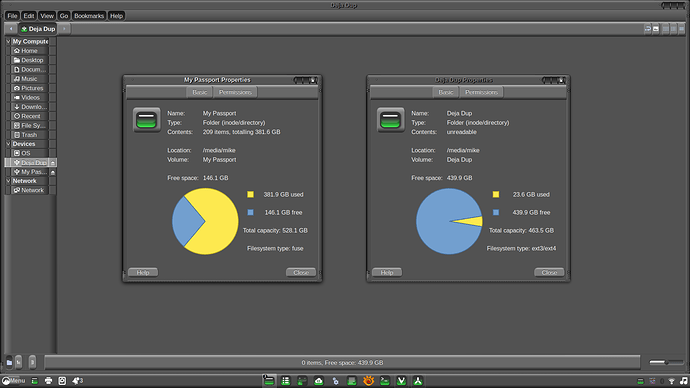 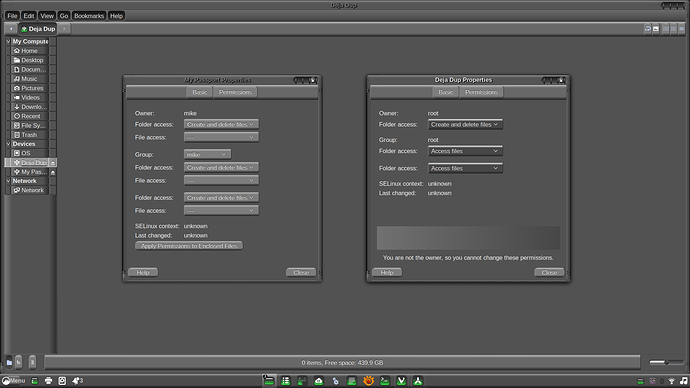 Why not install the python3-pydrive package?

I little more info .... it seems that I am not the owner of the Deja Dup partition it appears to be Root is the owner .... and how did Root get to become owner ?

Have you tried launching Backups from terminal with elevated permissions?

I think my main problem is that my Deja Dup partition on my HD is not mounted or at least that is what it says ..... so now I need to figure out how to mount it ..... the other partition named My Passport is mounted .... Deja Dup can't find the partition on my HD to load the backups

The mount feature for the Deja Dup partition is grayed out .... 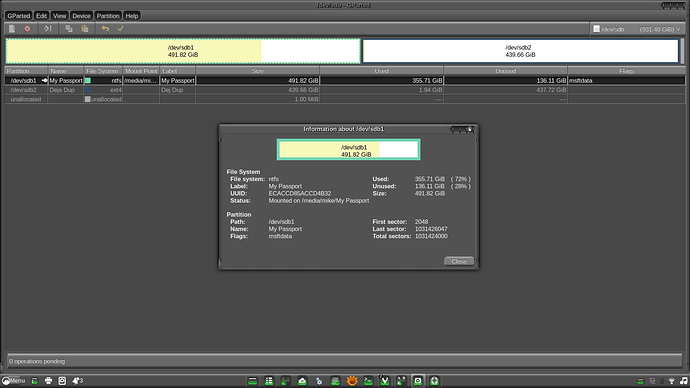 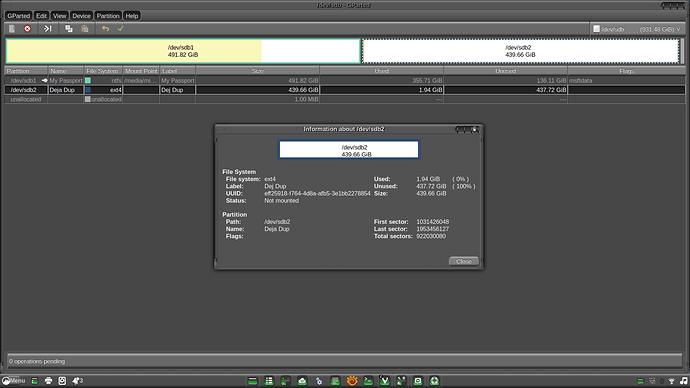 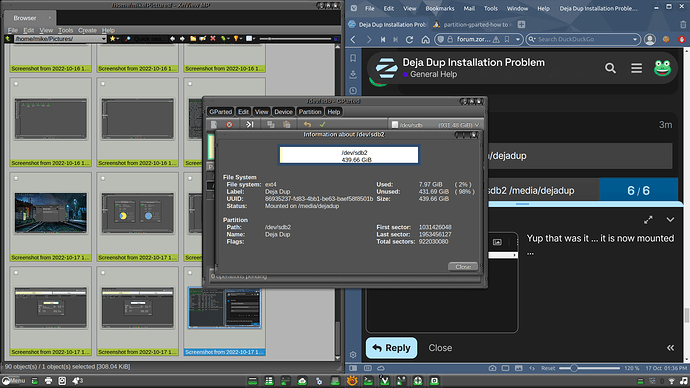 Thank you kind sir now let me try downloading Deja Dup again as I deleted it using Synaptic as I wanted to get rid of all of it ...... should I use it to reinstall Deja Dup again ????

should I use it to reinstall Deja Dup again

Any method you prefer to use...

I tried the one you listed above but it didn't help much ..... and I did install the python3-pydrive package but it doesn't show up in my main menu ... but it did say it was installed ....

Again thanks I've spent the last two day searching and searching the web but at the time I really didn't know what was wrong ....

Unfortunately something didn't work ..... it acted like it was downloading stuff for about 10 mins. then I got this message ...... 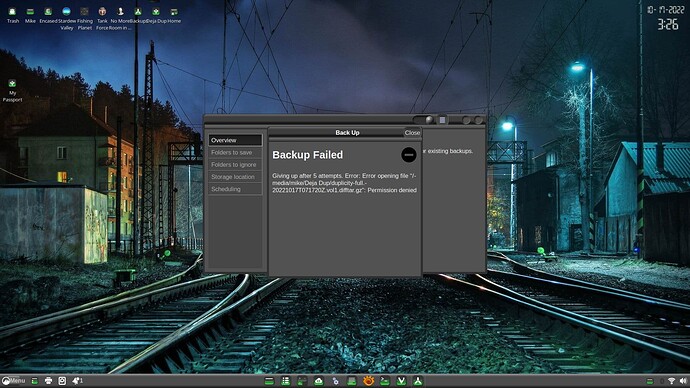 Have you tried launching Backups from terminal with elevated permissions?

Command 'deja-dup' not found, but can be installed with:

Also on the official Deja Dup website they recommend using Snap or Flatpak .... both of which I don't want .... the version I used in the photo above was from Synaptic version 40.6-1ubuntu2 I believe .....

I suspected... it must be run from home.

Yes... I notice that many tech articles now are really pushing Snap. Hard.
They won't even give the APT installation instructions for software, now...

It just feels like...
Linux is becoming Microsoft.
I think, in the end, I will be migrating away from Linux. For all the same reasons I migrated from Microsoft.

I think, in the end, I will be migrating away from Linux. For all the same reasons I migrated from Microsoft.

I don't think the Linux world is so small. Rather, those who seek power over freedom should leave FOSS world.

Also on the official Deja Dup website they recommend using Snap or Flatpak .... both of which I don't want ....

Yes... I notice that many tech articles now are really pushing Snap. Hard.
They won't even give the APT installation instructions for software, now...

I'm not sure they recommend a Flatpak or Snap. They offer those formats as well installing from source as installation methods on the webpage. In some way this makes sense. They're affiliated with Gnome, which is distro-agnostic.

Yes, they could list the instructions for using the terminal for installation for every distro. But they have little influence over whether and how distributions make Déjà Dup available. On the other hand, they can publish the code on Gitlab, Flathub and Snapcraft themselves.

I'm not sure they recommend a Flatpak or Snap. They offer those formats as well installing from source as installation methods on the webpage.

It depends on the article. My observations is that I am seeing more and more tech articles only offer Snap or Flatpak installation methods (across a variety of different applications, not just Deja Dup) and they do not mention APT or terminal at all.
Gnome may be distro-agnostic but it is 100% most certainly not desktop agnostic.

My active participation on this forum means that I am constantly looking things up to help other people install apps (I have never even heard of sometimes), whereas the average user only looks up how to install things for themselves on occasion. This exposure means I see a lot of install guides.

I think Linux OS newbies often stumble over software installation, as I did. However, Snap and Flatpak do not make it easier, but rather hinder understanding.

Well so far so good .... you just have to be really careful and not make a mistake on which drive you need to use and from which drive you want to get you backup from and install to ..... but it is done .... had to install a 2nd backup because the first one was only Zorin Pro and only had Gnome installed ....

So I choose a newer backup by about 9 days but still from 2021 ..... seems to work flawlessly .... am using my old wireless mouse ..... my wireless keyboard works great and the disappearing min ... max and delete are all working fine and visible once again ....

Did have a problem getting into the board had to have a link mailed to my email address before I could get in .... the sign in page didn't work for me .... but not to worry my Nordvpn doesn't let me sign in either .....

Haven't started to add my old saved Home Folder to this one yet ..... gonna play around with it a while first to make sure everything is working OK ...... I did block all but security updates from installing and I just use the Remind Me Later button even for those .... I suppose at some point I will need to turn updates back on but not right now ....

I was disappointed with Inkscape going down this route. Before I had a Jitsi Meeting with an educator who supports low vision students I wanted to download the current version of Inkscape. This led me to choosing the only option available to me, using the .image method of installing. It's yet another reason why I stick with what is available in Devuan and can manage with 0.92 Inkscape instead of 2.x.x but I had to install the later version for the meeting as that is what Windows users would be installing.

Available as a .deb installer.