I installed the 'Dynamic panel transparency' gnome extension, but it isn't doing anything. Any suggestions how I can get it working?
https://extensions.gnome.org/extension/1011/dynamic-panel-transparency/

These are my taskbar/panel settings, I tried it with and without 'override panel background opacity': 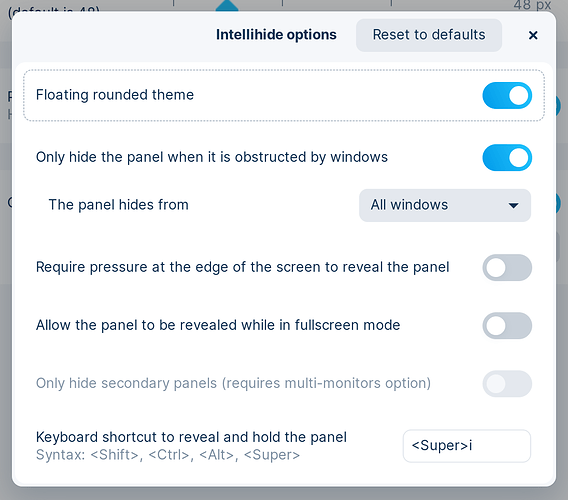 I installed the 'Dynamic panel transparency' gnome extension, but it isn't doing anything. Any suggestions how I can get it working?

Thanks for creating a new thread and this awesome posting with clear screenshots. I wish more members follow your example

I do not use extensions myself but other volunteers should be able to help you.

According to your screenshot, you have the panel opacity at 0. Are you sure its doing nothing? Have you changed that value to a different percentage? If I recall correctly, I have that set to 30% on my Zorin system.

Also, have you clicked on the Zorin

icon and typed extensions, and went to extensions? Its your menu where you access your extensions. If you installed the Dynamic Panel Transparency extension, it should be in there.

And when you see it in the list of extensions, there should be a gear

icon or something next to it, to config it. In there will be the options to config it. I don't have this extension, so I can't really help you with screenshots.

It shows up in extensions and I played around with the settings.

I've tested it with opacity set to 0% and to 90%, with and without 'override panel background opacity'.

Also, I assume you installed the extension by simply clicking on the toggle button on the Gnome Extensions website correct? You didn't try to download the extension and install it manually right? You just clicked the toggle and had it do it for you right?']

On the Gnome Extensions website, is the toggle button RED in color? If its RED that indicates the extension is in ERROR and not working. If you don't see the word ERROR and a bunch of RED color on the toggle, then the extension should be ok.

I have no idea what is going on, I am grasping at straws here.

I'm not running a multiple screen setup.
I indeed clicked the toggle button and did not see any red or error message.
I just tried installing it manually trough the GitHub readme but could not get it to show up in extensions.

Maybe Zorin changed to much in gnome so the extension is not compatible?

Maybe Zorin changed to much in gnome so the extension is not compatible?

Or that GNOME developer broke the extension again...
One reason I avoid using extensions.

I don't... When it comes to Gnome and Gnome-extensions, I am the weakest link.

I do know that others have asked about this particular extension, before.
The page for DPT states "May be incompatible with some extensions that make extensive changes to the panel." Zorin OS does have quite a lot of Panel gnome-extensions...
In Gnome Tweaks, a person might try disabling all Gnome Extensions.
Then enable Dynamic Panel... Then enable each extension one-by-one until the Dynamic panel breaks, narrowing down which extension is causing DPT to not work...

When it comes to Gnome and Gnome-extensions, I am the weakest link.

Same here....
I am getting tired of Gnome developers keep on breaking extensions and gave up on them.

I wonder if there is another way to accomplish what HanneMaes wants to have.

Hanne, is your panel located at the top or bottom, because I believe the extension is made/written for panel situated at the top. But I might be wrong of course.

I can confirm that extension conflicts is most certainly a thing, and it happens to a lot of people. You haven't posted your full list of extensions for us to see. However, using logical deductive reasoning, we can assume, you have all the ones that come with Zorin at the very least, and the DPT extension could be conflicted with any number of them.

Like I've said in the past on here, I like to use Dash To Panel extension on POP OS. But in order for that extension to work, I had to disable POPS Cosmic extension. This is because the two were conflicting with each other. So that may be what is going on here.

Aravisian's suggestion to turn em all off, turn on your DPT, then turn on each extension after that, till you find the extension that breaks it, is a wise choice. Eventually, your gonna find it, and when you do, your going to say, "you have failed me for the last time, forever off you shall be"

It's crazy how you have to have the right version also extension.

From the command line, I get gnome-shell version 3.38.4 and the available version extension on the extensions.gnome.org site is 3.38.34

Does this mean it will not work for me?

It's crazy how you have to have the right version also extension.

I suspect it is because Gnome developers are busy breaking extensions.

When I installed ZorinOS16, I had to ditch all the older extensions. One I was fond of was a internet radio extension. Of course it won't work on this version of gnome-shell and there was no newer version.

But I just downloaded the extension Hanne is talking about and copied it to into ./local/share/gnome-shell/extensions folder, but it does not appear in my extensions app. Do I have to log out and in to make it visible?

Do I have to log out and in to make it visible?

I have no idea, but you could try.
That is the only way to know.

Just, did still can't see it in the extensions app, how the he@@ did Hanne do it? We both have the same gnome-shell version 3.38.4.

Wow, had to delete the one from the extension org site. Downloaded the one from github (this is one with slightly a different name) and copied it to the ./local/share/gnome-shell/extensions folder (don't forget to alt F2 + r), so you don't have to log out/in.
Now I see it in the extensions app. 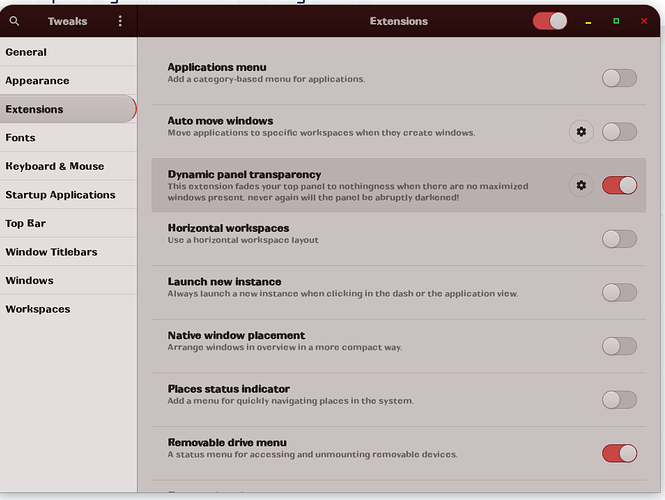 But now what??? hahahahaha

Well, I only install extensions via the automatic option through the website, I don't do manual install cause I never figured it out. Again, this is one of the areas in which I hate Gnome, cause its unnecessarily difficult for no reason.

But here's the good news. The Zorin brother's are working on Zorin OS 16 LITE right now as we speak. Were hoping they will finish and release it by next year, hopefully soon if were lucky. If you would like, you could ride this Gnome wave until then. And then once LITE is released, you could switch to that for an easier life.

Anyways, just a suggestion, not telling you to switch, just letting you know, it will be an option in the future. We all know XFCE is less painful then Gnome just in general, so might be worth your time installing, when LITE is eventually released.

I got this little puppy installed in my computer right now, its sitting with delicious 1TB of unnalocated space, waiting for OS 16 LITE install.

Zorin OS 16 LITE right now as we speak. Were hoping they will finish and release it by next year

LOL
You are not optimistic...

No really, I've tried all the options, I even moved my panel to the top. switched all the setting, but I just can't get what this extension wishes to accomplish. Well, let wait for Hanne to give some more feedback.

Oke, you install it, I was guessing you had it clinched when you go to sleep. But why not trying it out with Zorin Core, just to see how fast it starts and runs. I would even let it dual boot, test the capacity and speed.